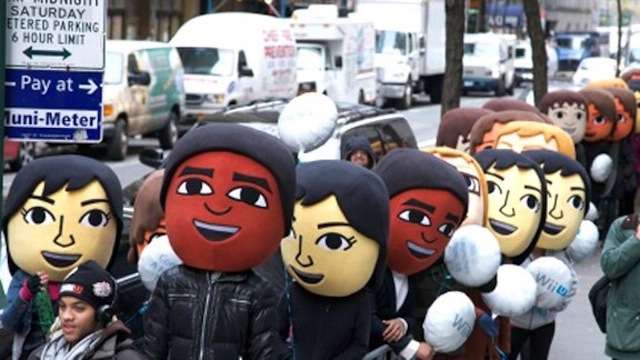 November 17th, 2012. 5:00pm. Nintendo’s new console, the Wii U, launches in seven hours. Some people have been in line for a full day; one person, almost a month. I round the corner to see the early-adopters queued up almost to 6th Avenue. Not too bad, I think, before realizing the gated-off horde stops but for sidewalk access, the line continuing up the cement past 49th street, then curving onto 50th towards 5th Avenue. Whether or not you know the grid system of Manhattan, you’d realize the same as me: A lot of people want this thing, today, right now.

This is true for most launches of new, hyped electronics. The present flock looks similar to others, save the green tunics and glued-on mustaches. Passers-by to the Nintendo World Store, near Rockefeller Plaza, look on, amused and curious. Beyond the glass building filled with toys, a giant pine tree is enveloped in scaffolding, preparations underway to celebrate another momentous arrival.

I trail three women, mid-50s, who peer at the line-up, talking and playing their glowing screens. “I think it’s for that Wii,” one says, and the others coo in understanding, before getting into a heated conversation about the quality of Five Guys’ French fries. They duck into a pizza place. When they come out, they see that oval logo, resplendent with glowing blue, and another concurs: “Yep, they’re waiting for a Nintendo thing.” Silent until now, the third hiccups an “Oh lord…” as they cross the street to take a photo of the ticking Launch Day clock, counting down from 6hr 37min 01sec.

I walk past Tanookis in lawn chairs, a Luigi smoking Marlboro Lights. I head towards Radio City Music Hall. Gigantic red balls ornament the fountain plaza directly across from the venerable marquee. I spy another line of people, a trail of breath-bursts punctuating the air above. Like me, they are hungry. The train stops at a food stand for The Halal Guys. “We are Different,” the yellow awning proclaims. I walk past and the lamb smells of Avenue Dunkerque in Lille, France, circa 2003, where I lived for a year amongst the aroma of baked baguette and pungent cheese and the swiveling skewers of cooked meat. Soon I’m the last in line, not for Nintendo but something more immediately sustaining.

In front of me, two dudes in ballcaps, Bluetooth earbuds blinking, discuss the complex landscape of 21st century romance. “My girl tells me I take too long to come,” the shorter, chubbier one says. His friend nods his head slowly. “Two hours,” the short one says, looking straight into his friend’s eyes.

I take my gyro-and-falafel pita the few blocks back to the Wii U launch event and sit across the street, watching a sea of Mii cardboard masks and glow-light sticks move in almost-time with a booming electro-pop tune of unfamiliar origin. I unfold the warmed foil in my hands and drip a deep-red sauce over the exposed meat, coated already in thick tzatziki. Twenty minutes later: My hands are sticky with yogurt and grease and my lips burn. This was not a good pre-interview meal. In an hour I’m scheduled to meet with Bill Trinen, official interpreter for El Papa de Mario himself Shigeru Miyamoto, and I look victimized by unsavory, unwanted guests. I duck into Duane Reade and borrow a short stack of miniature napkins next to the self-serve coffee. There’s no bathroom; instead, I head into Hygiene and pick up a Prevail two-sided hand mirror ($4.49), checking my face, my wind-blown hair. Good enough. I replace the mirror and head outside, back into the masses, the soundtrack to our waiting a loop of bad music and the voice of our M.C., named either Slater or Skeeter, paid to pump up the loyal many.

“Now somebody… anybody… everybody SCREAM!”

Isaiah “Triforce” Johnson, perennial first-in-line for each new Nintendo hardware since time immemorial, is eating what looks to be a corndog. A chunk of batter adheres to his PowerGlove’d right hand. He brings his PowerFinger up to his mouth and catches the errant dough before it falls.

I hear a Nintendo store employee say, “Will ya try to find someone to help Mario run a line?” Later, I hear her explain how a speaker cable needs to be run along the crowd, and I realize Mario is the name of an audio engineer, not the fictitious cartoon plumber with giant white gloves I’d assumed. Fantasy and reality are merging. The Countdown Clock strikes one hour to go.

The wait has taken its toll. I walk to the downstairs bathroom of an adjacent skyscraper. A man stands at a urinal, overhearing a neighbor’s generous stream. He touts, “That’s a race-horse pee!” Later I’ll consider the expression, and recall the lobby’s golden mural filled with stampeding equines, and wonder just what the hell that’s supposed to mean, anyway.

One block over, two 40-something women look through a glass wall into the now-empty Today Show living room, its floor being buffed by a tall fellow with blond hair sprouting from his baseball cap, the man grooving and buffing to a song we can’t hear beyond the glass. An inordinate amount of lighting equipment lines the ceiling.

“Look at all the lights!” one friend says. “You could make Godzilla look like Marilyn Monroe.”

When I return Reggie Fils-Aime, President of Nintendo of America, is onstage. A young boy sits on his father’s shoulders pumping his fists, yelling, “Re-ggie! Re-ggie!” Fils-Aime raises his hands and asks his people, “Is. Your. Body. Ready?” The crowd goes wild.

There’s a Destructoid writer, wearing a Blastworks shirt. Geoff Keighley shakes the PowerGlove’d hand of Mr. Johnson, First-In-Line. “Thanks, Triforce. Good to see ya.” Link holds his Master Sword high while bobbing to the music; Pikachu dips her shoulders, high-steps in place. Ten minutes to go. Slater/Skeeter steps on stage, blue scarf flapping in the breeze.

“Alright Wii U Nation! Let’s keep this party going! When I say, ‘Wii’… you know what to do.”

Mario and Luigi, full bodysuits and all, finally join Reggie onstage for the countdown to zero. The crowd yells out numbers ten through one in descending order; the doors to the store open and a dozen or so photographers rush toward the cash register to take the same dozen photographs, of Reggie handing Triforce the first WiiU system, of an estimated 5.5 million through March 2013, sold in the world.

I head in the opposite direction. My overnight bus back to Boston leaves at 12:30am; I’m fourteen street-blocks and six avenue-blocks away. As I jog past the lined-up faithful, moments from the purchase they’ve waited hours, in some cases days, for, I lift my hand to a Giant-headed Mii and it slaps me five, and I stumble through the crowded sidewalks of Midtown toward my double-decker bed-on-wheels.

Hours later I awaken, curled in two empty seats. It’s 3:48am. I look out through the front windshield and see through bleary sleep vision a barren highway, two dim lights pushing back the haze. The image feels portentous. I fall back into sleep, my fatigue cut with excitement, anxiety. The road ahead is uncertain and long.