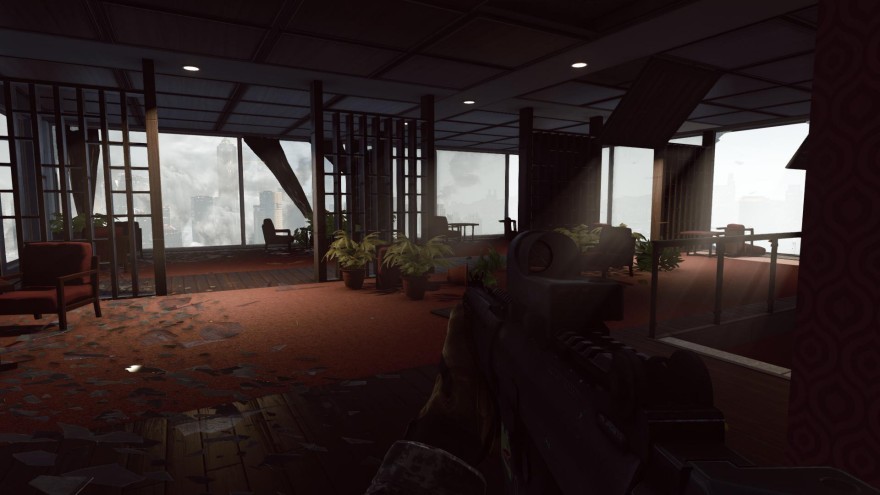 In the middle of the fight to capture control point C, I find myself alone in an elevator watching the screen laid into its wall. It displays an animated molecule, then a microscopic view that looks like a syringe entering a cell, then footage of live actors—a man and a woman, holding a child’s hands. Artificial insemination? I have time to think before a chime sounds, the elevator doors slide open, and I look out from the top of the world at columns of smoke rising across Shanghai. I see them with great clarity, because our Super Huey is circling this observation deck and the door gunner has blown every one of its floor-to-ceiling windows out.

Loose ceiling tiles flap overhead as I chase a Chinese soldier, who jumps straight out one of the holes that used to be windows; I follow, sputtering bullets at his parachute as we sail over the war, drifting down toward control point D, which is a little mall with escalators and a clothing store and a car dealership inside, which have all by now been shelled and machine gunned and burned, just like every object in the world of Battlefield, which no sane person would bring an artificially-inseminated embryo into.

At times, Battlefield 4 feels even stranger than the action movies it imitates, because it’s so finely ornamented with details that do not add up to anything. The breather in the elevator is a gag lifted from the cinema: a cool second of isolation before the doors open and the ordeal resumes. On the big screen, Bruce Willis would have time to shoot a look of disbelief at the ad as he waited, reminding the audience of the B-plot about his troubled marriage. But there is no second layer of meaning to look for in a multiplayer shooter like Battlefield. There’s only the wash of pale light over rubble, the bleed of a laser sight on your simulated retina, and the sounds of the man on Teamspeak who seems to be sucking rice through a straw.

Each control point in Siege of Shanghai—the only map currently available in the Battlefield 4 beta—is a meticulously dressed set. Shooting at a soldier in front of the restaurant or skyscraper bar throws light into a deep background of shattering bottles, flower pots, and tumbling paintings. Other touches sow visual confusion, like the mannequins in Finn’s sportswear outlets (as common as Starbucks in BF4’s Shanghai), or the red curtains that trail out of the windows of the skyscraper and turn like shifting snipers.

BF4 is about being in the shit, all the time.

Thanks to the ease of squad reinforcement, firefights are now surreally prolonged, and you’re always spawning on squaddies crouched under the counters and tables of those lovingly designed settings as gunfire rips the place apart. It feels like waking up on the floor of Precinct 13. The difficulty of getting to the action, which could be a time-consuming and almost contemplative task on a BF2 map like Kubra Dam, has been removed. BF4 is about being in the shit, all the time. It’s about glancing at a mini-map that appears to be covered in ants, hearing tanks open fire and watching the concrete barrier in front of you break apart like a very crumbly cookie. “The shit,” in this game, is not the emotional pressure of war but the presence of more visual information than you can easily process.

In her essay “The Concept of Cinematic Excess,” the film theorist Kristin Thompson explores the virtues of overstuffed images. She uses Eisenstein’s Ivan the Terrible to examine “unmotivated materiality”: details that draw our attention for reasons outside their “structural function” in the narrative. It’s not about “excess” in the colloquial sense of “excessive violence,” which could be essential to defining a character or a film’s style. Instead, Thompson’s catalogue of excesses includes shots where the camera fixates on a man’s extravagant collar, repeated close-ups of irrelevant emblems, and continuity errors such as the presence of an extraneous body in an execution scene.

The Siege of Shanghai doesn’t have a plot for its unchecked materiality to overthrow. But it does have a structure. The five flags are laid out so as to create zones of control, chokepoints at which armor can be obstructed or destroyed, sight lines, multiple access points for infantry, etc. Returning players grok these elements almost instantly, routing themselves through the less-exposed paths and finding vantage points on well-traveled areas.

It’s the excess, not the engineering, that defines BF4 in its current state.

But it’s the excess, not the engineering, that defines BF4 in its current state. Some of the happiest accidents may not survive the beta: the infamous “landboat,” which spawns not at port but at random locations on the streets of Shanghai, will be missed. The player-created emblems stamped on guns and vehicles, on the other hand, will be a layer of madness that endures.

The gleeful height of the game’s visual eccentricity, though, has to be the live-action ads that play on screens around the level. There’s the enigmatic “baby science” spot I mentioned, plus another elevator reel of grinning businessmen shaking on a deal. A towering billboard lights up with moving images of a Chinese-speaking ape and a domestic cat stalking across the screen (seen through smoke or over the rise of a bridge, you might mistake it for an approaching vehicle). Even the subterranean section of point B has a screen tucked in the corner shilling for public transit. They seem to share a common theme: “things that have nothing to do with Battlefield.”

The ads may be intended to evoke the “real” Shanghai, but they only remind us how surreal the game’s version of it is. It’s a place where parachutes open four times in a row without being re-packed, where men shot in the chest by heavy machine guns dash away at full speed. Is the heart of my twitchy begoggled action golem, who knows the peace of death in only 10-second intervals, moved by the sight of a child? Am I now to imagine that children exist in the world of Battlefield?

Is the heart of my twitchy begoggled action golem moved by the sight of a child?

Yet I love the ads all the same, for the times they pulled me out of the action and made me wonder what the hell I was watching. It’s tempting to think that as Battlefield evolved (or, if you will, LEVOLved) the maps grew smaller, the action thicker, and players’ patience thinner. But the games may also be getting weirder.

Thompson celebrates Ivan for the “wealth of excessive details which make [it] a rich perceptual field,” and the same abundance of distractions gives Siege of Shanghai its charm. The mapmakers designed for chaos. They want you to get rammed off a roof by a helicopter strut and die looking up at an ad for cat food. They never saw a perceptual field they couldn’t enrich.