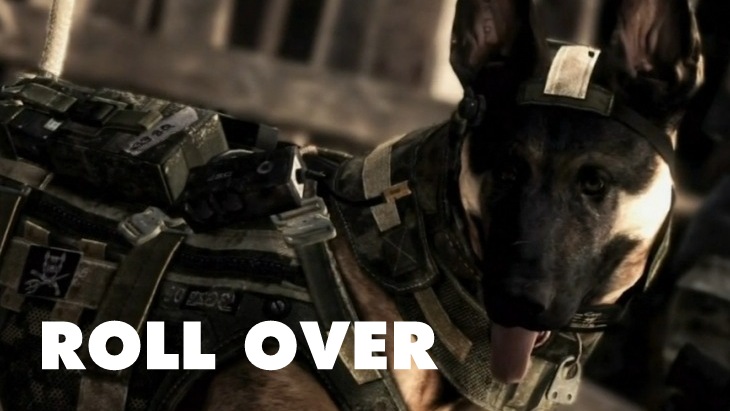 “I love him because I know he will make a fine dog. But I also love my son, and I gave him up for war work. And I will give my dog also if he can help in this war. It is not much I can do, but if you can use him, send for him any time you want him. But when the war is over and he is still alive, return him back to me.”

I saw a lot of people die this week.

Perhaps it’s to be expected, but blood continued to reign at E3 this week as title after title demonstrated exactly how many ways you can kill a man. (A lot, apparently.) And so it was with a heavy, guilty heart that I sat down for a demo of Call of Duty: Ghosts, the newest in the series that made a splash at Microsoft’s initial press conference.

I don’t need to belabor you with the narrative details of the new CoD. Having played through the campaign modes of the series since Modern Warfare, I feel comfortable telling you that story really doesn’t matter all that much. Call of Duty titles have the feel of roller-coasters—you pay $60 for admission, you strap in, the world spins by very fast, and you feel dizzy, nauseous, and exhilerated.

But more importantly, Call of Duty has had a profound effect on the way that we think about contemporary violence. The shooter has become shorthand for everything that’s wrong with games and with no bigger franchise in the world than Call of Duty, the way we think about killing in games is deeply informed by the game’s maker. But as Simon Ferrari noted in our very first web article, what’s been most remarkable for Call of Duty is its endless nature of slaughter. The smoke of gunpowder never dissipates:

social realism of the games is the sine qua non of their design: the realization that there is no end to the enemy force in front of you. Without this rule, without the hordes of your own computer-controlled teammates dying all around you as your squad inches toward the next checkpoint, all you’ve got is a shooting gallery.

The hits just keep coming, but as designer Steve Gaynor has suggested, it is exactly the ceaseless nature of enemies in Call of Duty that mutes its effect on how we see death on-screen. Gaynor coined the term “specific violence” as a better metric for how human life should be evaluated. “Violence performed by the player in the videogame is only legitimate if the victim is a unique and specific individual,” he writes. That is, if I can’t see the life drain from an enemy combatant’s eyes, then it really doesn’t mean a thing.

So when I sat down for a 30 minutes of Ghosts at the Activision booth at E3 this week, I was a bit surprised that death, for the first time in a Call of Duty game, felt intimate. Why? Well, you can thank man’s best friend. 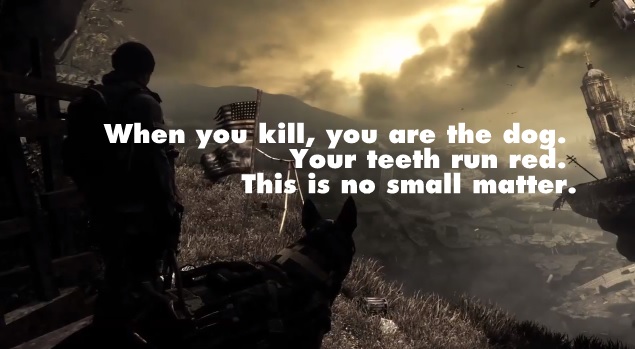 Ghosts features motion-captured dogs who serve as your sidekicks throughout the game. They whimper when they want you attention, look you in the eye for support, and can distract guards for you as they bark. But when they bite, they bite hard. Via a camera mounted on the dog’s back, you get a close-up view of what it looks like when a German Shepherd tears at a man’s throat. The victim screams and struggles. At one point, you send a dog inside a broken window to fish out enemies. There’s a pause. Then, suddenly, the door beside you explodes as a terrified solider with a dog locked in his grip flies out.

When you kill, you are the dog. Your teeth run red. This is no small matter.

In Paolo Pedercini’s political commentary game Unmanned, he draws a line between the faceless nature of drone warfare and the subdued detachment of modern videogames. In the days of yore, one character laments, you looked a man in the face when you killed him. That’s what tempered our violent passions—the reality of life passing in front of us. But games, like drones and like Call of Duty, push that experience further into abstraction until it is utterly meaningless.

Without knowing what the war was for, the dogs had done what they’d been asked to do. Because that’s the nature of the bond we have with dogs. We take care of them and ask them to trust us, and they do.

While I doubt this was intentional, the effect of the new dogs in Call of Duty is one of unexpected closness. The only non-human beings that share a similar relationship to dogs are our cars, but it’s not quite the same to run some one over as it is to close our jaws around their throat. To finally see that brutality face-to-face may subconsciously give players pause.  It might not be enough of a corrective to force tough issues about why we so mercilessly kill on-screen, but it may be enough to scratch the surface.