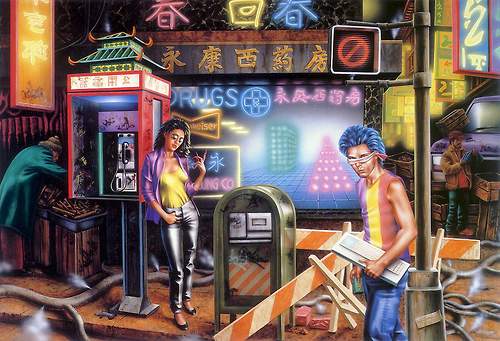 As a pioneer of cyberpunk, William Gibson occupies an extremely relevant place at the intersection of culture and technology. Speaking last month during a conference at the Chicago Humanities Festival, he made some interesting observations on the decline of cyberspace and the future of technology.

First, he admitted that he writes on an iPad, a distant cry from Case flatlining in the Matrix.

I think I wrote a novel and a half with my manual typewriter. Then, I started with an Apple 2c. I’ve never actually had a computer that wasn’t an Apple. I now have a 3 year old MacBook and an iPad. I suspect that my next book will be written on the iPad. It’s easy to do and it makes for better sprawling on the sofa.

Gibson went on to say that most of the ideas we had about the internet turned out to be wrong.

The internet [is] turning itself inside out. One of the characters in Spook Country says, “cyberspace is everting.” I think it has everted considerably more since Spook Country was published. What seems to be happening is that it is becoming something we won’t talk about, because it will have colonized everything. It was fun to have my little neologism “cyberspace” turn into a word that people use to describe something real. But what I’ve always been most interested in is how it would disappear… I think it’s starting to go out, because it is no longer describing what is happening.

When people started using “cyberspace” to describe their life experience, it was always over there. It was somewhere else. It was behind the screen of your computer. It was an nominal space. Now it’s not like that at all. We all move constantly, literally and physically, through its coordinates. We look at the Victorians, and for some reason they had a need to deny that sex existed. I think that when we are the Victorians, people will be looking back at us and saying that for some reason they had a need to distinguish between what they thought of as “the real” and “the virtual.”

Gibson ended on a note that suggests that videogames are what put virtual reality out of its misery.

The images we were shown in the 80s—the virtual reality imagerythe girl with the gloves and the goggles and her hair being blown back beautifully by the experience she was having under the goggles. That was the virtual reality future… But what actually happened was that the interactive content was sufficiently intense, and you don’t need the goggles and the gloves. There’s nothing in front of you except what you are seeing on the screen. VR was like the future that never happened. Like the flying car, or the jet pack. Still, I think we will all be living on one side of some very [mathematically] singular stuff one day.

Watch the fascinating hour long interview on YouTube. (Just be wary of the fluctuating sound quality, and the bad jokes by the commentator.)