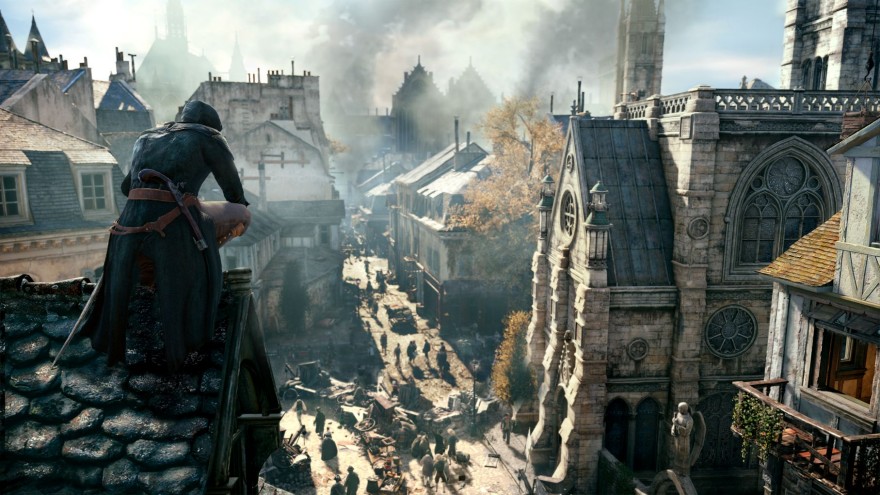 People are singing in an 18th century Paris bar, songs that stoke the fires of revolution. As the young assassin Arno Dorian, I descend from the rooftops to act the flâneur and stroll through the muddied, crowded streets. I overhear whispers and shouts of words like liberté and fraternité in a city that writhes with unrest. Drunken arguments spill out into the streets; I see hands raising mugs of ale that will soon be hoisting pikes adorned with the decapitated heads of aristocrats. I notice all these political forces of systemic oppression and reactionary violence, and then I continue to my next mission because, in Assassin’s Creed Unity, I’m told there’s more at stake than the corpse pile in the street and the city that threatens to eat itself.

As much as I enjoy the Assassin’s Creed series, I always find myself inevitably baffled by the messiness of its metanarrative. The fictional war between the Assassins and Templars provides reason enough to explore various eras of historical significance, but it has become so convoluted that it gets lost in its own fiction of ancient civilizations, digital gods, and apocalyptic visions. The games are excruciatingly meta-textual as well. In them, you actually play as a character that accesses genetic memory through a device called the “Animus,” a framing technique the developers find so clever that they must reference it as often as possible, whether through computerized glitch aesthetics or a terribly intrusive interface.

Such a removed perspective often makes history little more than set dressing, and as a result the events and eras depicted diminish in significance due to simplified presentation. The first Assassin’s Creed elucidated the religious and political clashes of the Third Crusade with heavy-handed exposition. Renaissance Italy and the Golden Age of piracy fall prey to romanticism in Assassin’s Creed II and IV respectively, while Assassin’s Creed III exhibited the authority of a grade-school social studies lesson about the American Revolution. The series is a theme park ride through Western history, insisting that these events exist in isolation and are tangentially linked by a larger conflict known only to clandestine puppeteers.

Assassin’s Creed Unity continues this trend of glossing over the complexities of its historical setting in favor of the larger narrative and the heroic tale of Arno Dorian. Orphaned after the murder of his aristocratic Assassin father, Arno is adopted by François de la Serre, a Templar with a deep respect for Arno’s father. He grows up in ignorance of his father figures’ war alongside de la Serre’s daughter (and Arno’s love interest) Élise, but a coup within the Templar order leaves de la Serre dead and Arno with the blame. What follows is an all-too-familiar tale of revenge, intrigue, and the role of legacy in a turbulent world.

Arno’s heroic arc is formulaic, and his relationship with the Assassin/Templar war is the most tired the series has ever been. It’s a shame, too, because the French Revolution fits the Assassin’s Creed franchise’s cold indifference to historical politics better than any of the other entries. The “traitors on all sides” dictum that runs through each game is suited for a time of heartless aristocrats and bloodthirsty mobs. Instead of tinkering with the political machinery, however, the game insists on simply being a tour through an imagined history, complete with caricatures of historical figures. Napoleon exercises military might, Robespierre’s guillotine becomes the symbol for his Reign of Terror, and the Marquis de Sade makes libertine mention of lecherous priests and bestiality. Historical and political giants drift in and out with no more consideration than a wink to someone vaguely aware of the French Revolution’s major players.

Though the franchise at large never had anything profound to say about its eras’ various political machinations, Unity suffers from this lack of awareness more than most. It is by far the darkest game in the series but lacks context to explain how boiling resentment of powerful monarchies and corrupt officials led to violent revolution. There are moments when the poor gather outside lavish parties, and an early section has Arno exploring a beggar’s quarter where debtors are mutilated when they cannot pay. These grisly moments are perfect for an epiphany about the plight of the poor being ruled by ignorant nobles but are used instead for set decoration for Arno’s missions, carrying no more narrative weight than a trip through any other area of Paris.

Moments like this occur throughout the game wherein history is referenced but never explored. Men storm the Bastille in one of history’s most famous attacks on a symbol of abusive royal authority, but the player and Arno never learn of its political significance. We witness Louis XVI’s execution without understanding why it mattered. Factions like the Jacobins or the National assembly seem perfectly suited for interrogation via Assassin’s Creed’s established fiction of shadowy conspirators, but they go unused. Arno himself has no real impact on or brush with history with the exception of a wonderful mission that begins the Thermidorian Reaction and downfall of Robespierre. Even so, Robespierre remained only important as he related to Arno’s story, not the much more interesting story told in streets where the masses had put their faith in a man more vicious than the witless king they had watched him kill. History becomes little more than background noise, a stage for a much more easily digestible drama about revenge and a fictional war.

I find myself inevitably baffled by the messiness of its metanarrative

And that’s what bothers me about Assassin’s Creed Unity and the series as a whole. History serves a fictional metanarrative that insists on its own cold importance. The player never becomes anything more than a tourist, the game never more than a kitschy simulation. The game’s creators, of course, are aware of this (re: the Animus as metaphor for a game system), but they never have anything insightful to say about it. Last year’s Black Flag at least provided a big enough sandbox and delightful tone to never beg for historical insight. Unity, conversely, screams for attention with brutal realism while only shouting in vague generalities about the need for revolution and égalite, ringing hollow in a larger narrative that insists on its own importance.

As I played, I couldn’t help but think of the cautionary words of French philosopher Jean-François Lyotard and his skepticism of metanarrative. He argues that any attempts in understanding universal truths through totalizing narratives is suspect and that we should instead look to what he calls petits récits or smaller, localized narratives of particular events, not to isolate them but to understand the complexities of those narratives as deeply as possible, reading history as a vast amalgam of pluralities instead of a broad, simplified story of “progress” or “enlightenment.”

When I saw that Unity appeared to be a return to early incarnations of the franchise (a single assassin exploring historical urban spaces), I hoped to see it rectify some of the sweeping scope that seems to plague the series’ fiction. Unity was a chance to restructure the series and delve deeply into how this particular event, a moment of European history so bizarre and frightening with ramifying effects that echo for centuries, could be given new life in a digital world. I wanted to help Robespierre rise to power and stop him after he became immediately corrupted. I hoped to see how de Sade’s twisted work scandalized the aristocracy. I longed to discover a unique perspective on Napoleon during the youth of his military career.

Historical and political giants drift in and out

Instead, the game meanders through a simulacrum of the French Revolution while focusing on a distant fictional plot that’s far easier to tell. Unity’s metanarrative turns something specific into something simple, general, a clean way to experience a false history devoid of any attempt to explore what made the era so significant. It’s a narrative we should regard with suspicion because media dictates, on some level, how we remember the past. Videogames afford us the opportunity to access the past with fascinating tactility, to view history, even if it is fictionalized, with fresh eyes in intricate ways. To settle for a text that dismisses such prospects in favor of a sweeping gloss of history is to sell ourselves and our games short.

When I returned to the Paris rooftops far above the rabble below I marveled at how clean and ordered the city looked. It seemed endless, pristinely crafted and elegantly set. The rabble of the people turned to a muffled hum, and I forgot about the blood and shit-strewn streets where people carried heads on pikes and screamed for justice from a conflict I would never really experience. On the roof of the city, I thought I could maybe catch the faint words of a song that had some political resonance. But in retrospect it was probably just the wind, carrying nothing at all.