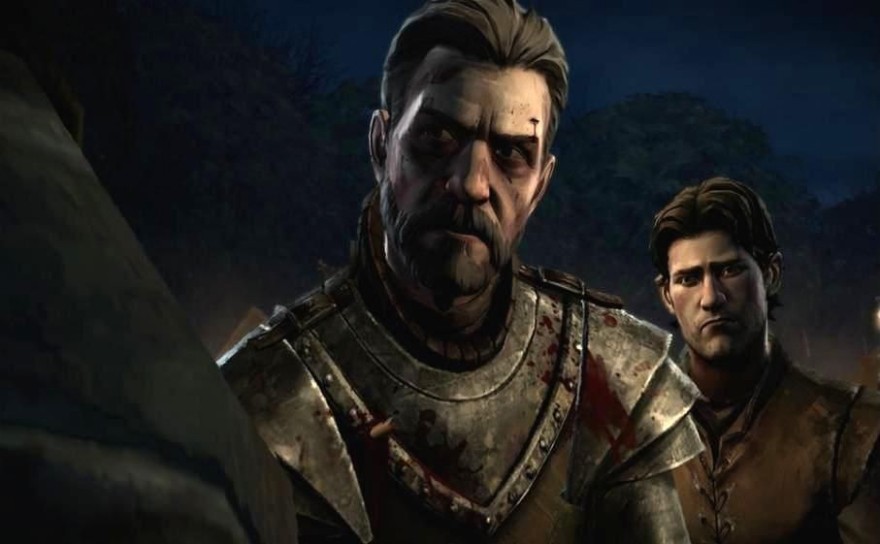 The first significant look at TellTale’s six-part episodic game version of HBO’s Game of Thrones finally arrived yesterday, with the launch trailer for part one, Iron from Ice, which also coincided with the episode’s release today on select platforms. In the true spirit of GoT, the trailer depicts an atmosphere so tense you could cut through it with Valyrian steel. (Please stop laughing—Game of Thrones is super serious. People die all the time and it’s traumatic.)

Telltale’s story revolves around the War of the Five Kings, which spans from the end of HBO’s third season up until right before season five begins. For those with too weak a heart to remember, season three left House Stark in shambles after a particularly gauche wedding, where some pretty unpleasant party favors were handed out at the end of the night. Pro tip: never let a Bolton plan any of your events. Terrible mess to clean up in the morning.

Following the unexplored House of Forrester, a noble family only briefly mentioned in George R.R. Martin’s A Dance with Dragons, the trailer details the precarious position the family finds themselves in with the Lannisters, for having been loyal to the Starks in the North throughout the war. You know who also doesn’t appear to be too big of a fan of House Forrester? The Boltons. Bastard Blonton Ramsay Snow in particular, according to the trailer. Which means I strongly recommend all players stay far, far away from anything resembling a hunt and/or grilled sausages.

The studio also revealed on their blog that, much like both the source material and the HBO series, their game will be played through five different perspectives, all of them members of the Forrester family. Though multiple perspectives is new to Telltale’s usual format, they say that “playing as five characters reflects the epic scope of Game of Thrones, but more than that, the actions of one character can ripple out to affect the rest of House Forrester—so you’ll need to be mindful of how your actions as one character may affect the rest of your house. Multiply the actions of one character by five, and you’re truly playing the Game of Thrones…where you win, or you die.”

Throughout the past month, Telltale’s been releasing more information about individual characters through exclusives to a few media outlets. Game Informer learned that one of the Forrester sons, Asher, “had always been a rebellious youth—brawling in taverns, sleeping with whores, and finding ways to raise his father’s ire.  But his life took a dark turn when, at age seventeen, he fell in love with Gwyn Whitehill, the eldest daughter of his father’s bitter rival.” To avoid war between the two rival Houses, Lord Forrester chose to exile his son across the Narrow sea, where he “remains in Essos to this day, living as a sellsword, trying not to think about the life he left behind.”

The Forrester house words are “Iron from Ice”

While they’ve only confirmed that the game will revisit King’s Landing and The Wall, Asher’s story indicates that players might also eventually come across a certain Mother and her Dragons in Slaver’s Bay (or anyone else who winds up on that continent by the beginning of season five.) Aside from familiar locations from the show, Telltale’s Game of Thrones introduces new sights like Ironrath, the seat of House Forrester deep in the northern woods, described as “an imposing stronghold surrounded by towering ironwood trees.” While we remember the Starks’ iconic motto that Winter is Coming, the “Forrester house words are ‘Iron from Ice‘, which echoes their belief that—like the ironwood itself—the adverse conditions and unforgiving landscape of the North only makes them stronger.”

With all these interesting snippets of lore and backstory, Telltale’s already on their way to proving themselves another worthwhile addition to a cross-media universe, having already achieved the feat two years ago with the acclaimed Season One of Walking Dead. Following the cultural shift toward what media scholars are calling “transmedia storytelling,” phenomenon’s like Game of Thrones are just one example of our society’s collective turn toward world-driven rather than narrative-driven stories.

From the Marvel universe to The Walking Dead, the most popular stories of our time revolve around expansive worlds rich enough to sustain exploration throughout several different mediums (comics, books, movies, videogames). Telltale already managed to show how games could uniquely contribute to the experience of The Walking Dead universe, arguably in a more personal way than a TV show ever could. Like The Walking Dead, the GoT fiction invites a kind of active participation on the part of the viewer or reader. Playing as House Forrester, fans will finally be able to answer the question that matters most: could I survive the Game of Thrones?

While Iron from Ice is available today for PS4, PC, and Mac, it will launch on the Xbox consoles tomorrow only, and come to iOS on December 4th and PS3 on the 9th.