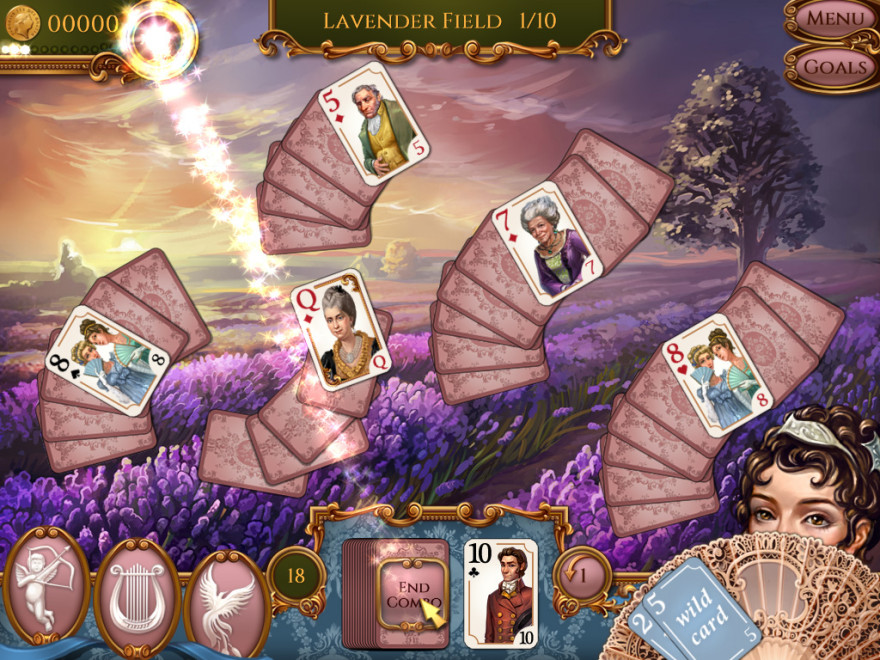 It may sound strange, but I think 19th century high society British people would’ve probably understood videogames. To some extent, buying a trendy new console that includes lots of (unnecessary and) luxurious bells and whistles, which requires a highly stable internet connection, as well as expensive (to buy and make) videogames just to play at a pastime is kinda the definition of conspicuous consumption and leisure. Why are they always playing parlour games in Jane Austen books, you ask? Because high society people have nothing better to do than waste time by waging social battles over innocent card playing. Kinda like your modern day middle-high class teen who spends all day abusing other players on Call of Duty (I think Veblen had a few things to say about mass-production and capitalism, too.)

For Helen Carmichael, one half of a husband-wife duo with Jake Birkett which makes up Grey Alien Games, the theme for a leisurely solitaire game came to her while watching Downton Abbey. Since the couple “had just recently moved back [to South England] from Canada, we were keen to revisit our favorite historial locations in the UK.” So Regency Solitaire was born, as the history buff couple set out to conduct in-depth research into their country’s visually sumptuous high society past.

The history buff couple set out to conduct in-depth research on their country’s visually sumptuous past.

After Helen suggested setting Jake’s new game in Regency era Britain, the Solitaire gameplay seemed to logically follow. “Card games were hugely popular in the Regency era,” Helen explains. And since “gambling was also a common pastime” and many families “fortunes were often lost and won at the card tables (or “gaming hells,” as gentlemen’s clubs where betting took place were called then),” the games plot came as a natural fit too.

In Regency Solitaire, you play as charming high society girl Bella, who must win back her family’s wealth after her dimwit brother has gambled it all away. To avoid an arranged marriage with the hideously boring (but fabulously wealthy) Mr. Bleakley, Bella takes charge of her own destiny/love life; while the player, on the other hand, wins a plethora of solitaire rounds while visiting historic English landmarks like Bath.

The duo revisited the museums, castles and stately homes like Stourhead in Wiltshire and the Victoria and Albert museum in London for inspiration. “As researcher and writer I have done my best to go to the original sources and locations to make every detail historically-accurate,” Helen says. “My hope is that players really will feel they have spent a few hours in England of 1812.”

While I can’t speak to historical accurateness (Bath’s did seem much muggier when I visited it in this century, I know that), the locations that paint the background of each level in Regency Solitaire are magnificent. Attention to detail and genuine wonderment for the past seems evident in every virtual stroke of the watercolor-esque backdrops. Many of the landmarks they chose also carry delectable behind-the-scenes historical tidbits to tantalize any of the era’s romanticizers. Netley Abbey, the picturesque gothic ruins featured in Bella’s travels down the South coast, for example, are the selfsame ruins that a certain Jane Austen visited and lived nearby in 1807-1809.

Bella, with her respectable yet strong-willed ways, often resembles many of Austen’s best known heroines. But Helen says that, although she’s an Austen fan, the characters of Regency Solitaire “might be more at home in a Georgette Heyer novel. They are light and funny Regency romances written in the 1930s-70s with great attention to period detail, plenty of plot twists, and slightly larger-than-life characters.”

Each hand you play in the game is a unique formation of a golf solitaire variant, with power-ups and wildcards added to spice up the mixture. The variety and progressively complex games are mostly welcome changes to the standard card game—especially for those used to only playing the pre-installed on their Windows. However, although card games and high society 18th century England may go together seamlessly on paper, some of the transitions between story and play mode can be jarring.

But, in the end, the fast-paced play in combination with the catchy, romantic storyline—all layered under a decadently illustrated setting—wins over the heart of any Yankee who paid the €50 to take a tour of Bath and Stonehenge while visiting London. Present company included.

You can buy Regency Solitaire for $9.99 on Mac and PC here. If you’re a history dork like myself, you can read more about Helen’s travels around the country through their blog.