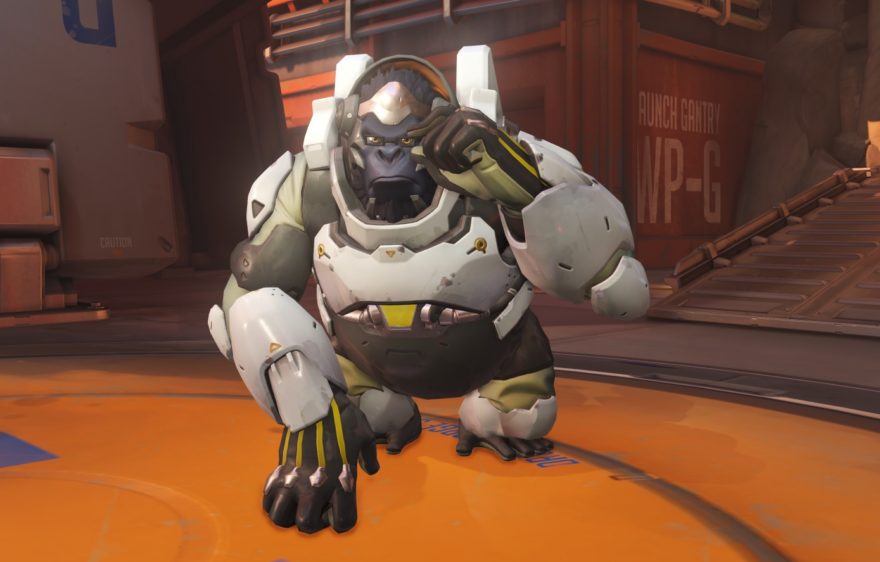 The last time I went to the zoo, I stood for a long while in front of the gorilla’s enclosure. One of the animals—an enormous guy—was sat with his back to the glass pane that showed his home to passersby. Occasionally he would turn his head around very slightly to glance at the crowds of children and parents gathered only centimeters away from him. The gorilla’s eyes were a deep brown. The expression he made (and I might be projecting; I’m not an expert) was filled with annoyance and frustration. He was too powerful and proud to stand these kids tapping on the glass and yelling for him to turn around. He was too smart to be stuck in a paddock, no matter how big it may have been.

he lets it all out

Winston, Overwatch’s glasses-wearing scientist gorilla, is a cartoon, but he looks and moves an awful lot like a real ape. He’s decked out in a high-tech bodysuit and carries an energy-spewing gun, but he also runs around maps hunched over, giant fists pounding the ground beneath him as he goes. According to the short videos and character bio he stars in, Winston was raised on the moon and genetically enhanced. He came to Earth to use his superbrains for good and serves as the Overwatch team’s de facto leader. In the game’s intro, he rallies his friends with a pretty erudite speech. He’s very collected and cerebral, that Winston.

Then, when his special ability is activated, Winston completely loses his cool. He throws himself around, smacking any enemy stupid enough to get close to him. In those moments he’s primal again. He’s a gorilla in a cage that’s too smart to be treated like any other animal.

For the rest of the match, Winston pushes up his glasses, booms polite phrases like “Pardon me” and “Excuse me for dropping in,” and generally acts far more genteel than the jerks shooting him with bullets, rockets, and lasers. It’s something good, then, that, when enough has finally become enough—when he’s given up on being too smart to care about everyone else tapping on the glass—he lets it all out.

When he spins around, glowing red with fury, cold clocking the ants in his wake, Winston allows himself to be the animal everyone thinks he is. When that happens, it’s nice. It makes you want to give him a cheer—“Fuck ‘em up, Winston.”

D.Va – An ode to D.Va, the sassiest dream girl this side of Overwatch
Reinhardt – An ode to Reinhardt, tortured scion of a broken land
Roadhog – An ode to Roadhog is an ode to ugliness
Zarya – Zarya makes Mother Russia her bitch