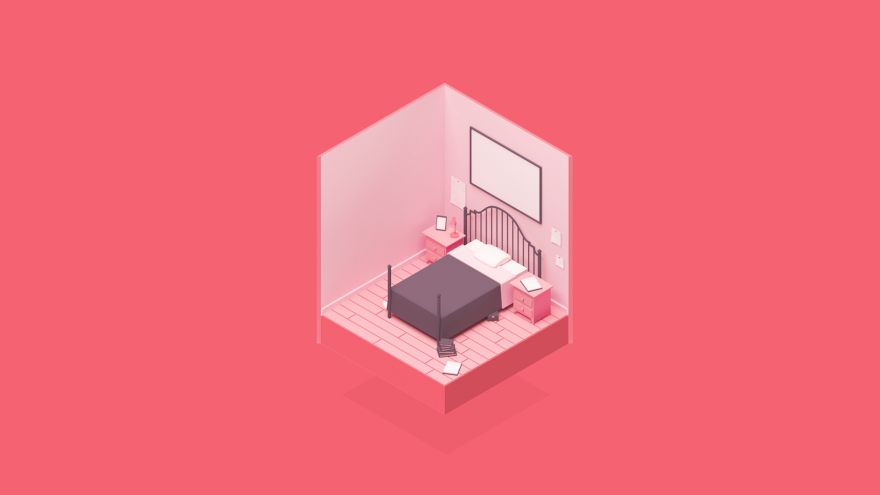 Each person in Winter‘s world is given a choice right before the moment they’re to die—life or death. Time is frozen in the one second before the outcome. Winter creator Happy Volcano calls this place The One Second World. It’s where the game takes place, across a series of beautiful dioramas.

More specifically, in Winter, players will look into a spot where a teenage girl is supposed to die (or not die). But it’s not exactly that spot. It’s recreation of what the girl remembers. It’s more of a shell. A really pretty shell.

The world is set on tiles, each its own colorful diorama—every room appears to be its own tiny habitat. Secrets are hidden throughout each snippet of the low-poly house the girl’s memory conjures, as well as throughout the rest of the world, filled with the places that others have died in the same second as the teenage girl. It’s dark stuff for the vibrant popup book–styled world.

That contrast was a purposeful decision: setting Winter in a “dark and moody” world would have been too cliche, Happy Volcano’s Jeroen Janssen said. The team wanted Winter to be mysterious, and for players to be eager to explore—a place players haven’t seen before. Moving tile to tile, the story will slowly be constructed.

“In Winter, the afterlife is conceived as a state of mind, a construction of the dying mind, combining distorted memories and references,” Janssen said. Winter is not a “deeply philosophical” game, he added—though it certainly sounds like there’s a lot going on underneath. “Dying remains, of course, the biggest mystery of all, although every religion claims to have it solved.” Winter is just another way to look at death; a way to explore “a character trying to free herself from her upbringing, however difficult and painful that can be,” Janssen said.

Check in on Winter at the Happy Volcano website. Happy Volcano expects to release the game in early 2017 on PC, Mac, and mobile devices.