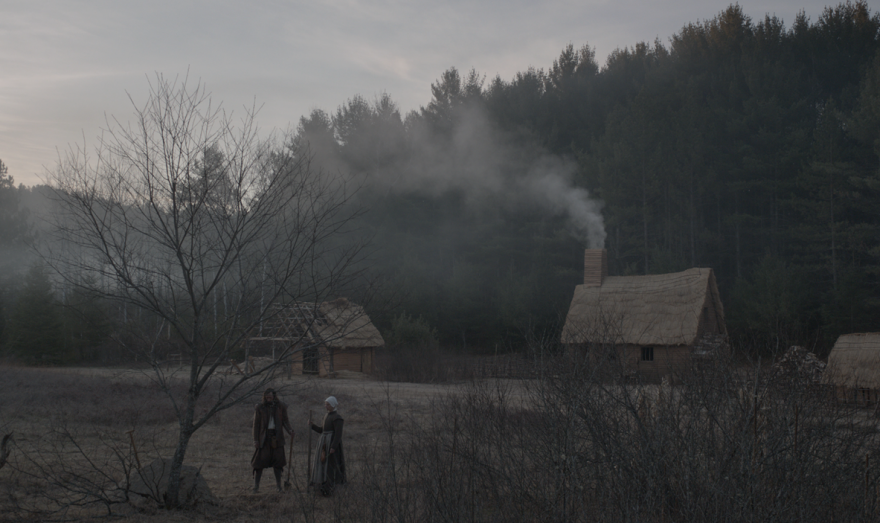 We’re still rounding up Fantastic Fest, bringing you impressions of our favorite films shown at the event. For all of our hot, hot takes, head over here.

To properly explain The Witch to you, I need to give you two pieces of context.

One: I grew up in rural Vermont. My house was sat off a dirt road winding through woods, woods I never really explored. They were just there, ever-present. Our town had a few ghost stories, born of boredom, I imagine. We even had our own cryptid, the Pigman, who lived in the woods near a particularly suspension-straining stretch of back road called “the Devil’s Washbowl.” The Pigman is, as far as I can recall, a naked guy with a pig’s head and he runs across the road or just stands there, in the woods, watching as you pass by.

It’s a fairly standard small-town spook story. But there’s a reason they find such traction in sleepy rural places: when you’re out on a dirt road at 2am in the dead of winter in a car with barely any gas and your friend decides this is the best time to mention the Pigman, it gives you this thrill somewhere in your gut. Your stomach turns over. What if—somewhere, in these woods, there’s something? Something ancient, something unimaginable? It’s at once terrifying and exhilarating. What if high school isn’t all there is? To have your bones gnawed clean by the Pigman … well, it’d be something for people to talk about, at least.

the appearance of a waking nightmare.

Two: the first time I ever got that thrill in my gut was when I watched Night of the Living Dead as a preteen. Two scenes stick out in my mind as sites of blood-curdling horror: a pack of zombies devouring the shattered remains of two would-be survivors after their truck explodes, and a mother being stabbed to death by her zombified daughter. The scraping, atonal soundtrack, the prominent gore, and the callous brutality got to me. I wasn’t ready for that shit.

I got the same feeling when I watched The Omen not long after, except there, it was compounded by years of churchgoing and catechism classes. I never believed in God or any of it, but the idea that Satan might come to earth disguised as a sallow little boy? And not with fire and many-eyed minions but with simple, direct violence he could calmly dispatch anyone in his way? It preyed upon so much inside me.

I left The Witch with tears in my eyes: partly from the exhausting, draining ordeal of watching the film, but also from joy, at finally recapturing that feeling of primal terror that led me to fall in love with horror in the first place.

The Witch bills itself as “A New England folktale,” and this is crucial to appreciating what it’s up to. It depicts a Puritan family cast out from their village thanks to their patriarch’s pride, left to live on the edge of the woods with only God’s grace and their small harvest to sustain them, and their slow descent into madness. Remember the line “Nature is Satan’s church,” from von Trier’s Antichrist? This is along those lines.

The dialogue is all ornate, archaic speech. The music is an intensely hellish din of droning strings and wailing, wordless chants. The slightly boxy 1.66:1 cinematography is claustrophobic, lit by flickering candlelight and draped in suffocating gray gloom. The end result is that you barely understand what anyone is saying between the accents, the syntax, and the music; it has the appearance of a waking nightmare.

When the family’s infant son goes missing (in a bloodcurdlingly matter-of-fact scene), their oldest daughter comes under suspicion of witchcraft. But as the audience, we’re given a glimpse of what presumably happened to him, and it is fucking horrifying. First-time (!!!) director Robert Eggers recasts familiar folkoric imagery in alien terms: a witch on a broomstick becomes a shot of the moon being gradually obscured by something looming into frame. The witch’s cackle becomes a squatting, naked old woman laughing a toothless, mirthless laugh. The Satanic goat becomes a billy named Black Philip who might be constantly whispering filthy, evil ideas into two young twins’ ears. The bubbling cauldron full of unholy potion becomes … well, you should probably see that for yourself.

The film builds patiently, as it needs to. It strands you in a place where there is no help and little sanity: young boys are drilled on their inescapable original sin, the woods loom dark and thick, and any ills are the devil’s work. By the time it tips its hand as to what’s really going on, we’ve descended so far into subjective madness that any line between the metaphorical and the literal has been obliterated.

If you didn’t grow up with Catholicism and tall tales, perhaps you’ll find The Witch slow and stagey, and you’ll think I’m just another hyperbolic internet clown who wants to crown The Best New Thing.

But The Witch moved me. It reached into me to a place past logic and cynicism to scare me on a visceral level. Several scenes have the sheer wrongness of that guy standing in the corner at the end of Blair Witch, that sudden sick shock: chief among them might be a fucking soliloquy. Yeah, this movie makes a soliloquy absolutely chilling. Whatever Robert Eggers does next will probably split the world in two.