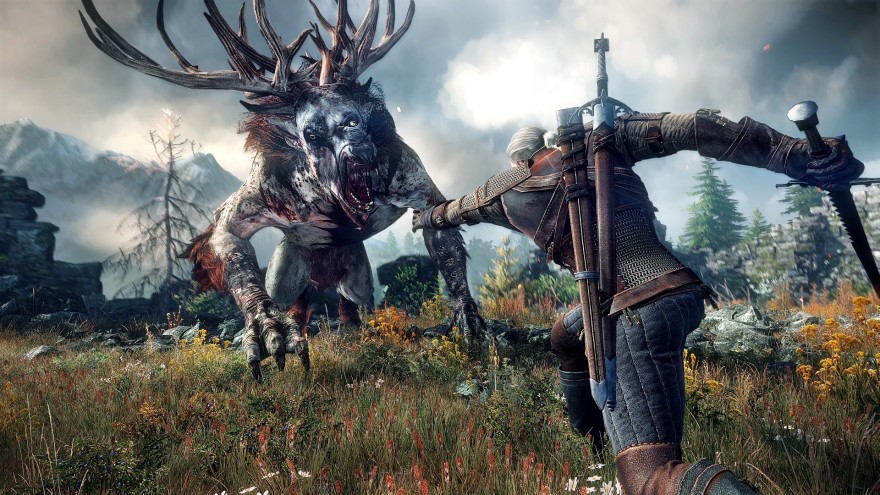 The word on everyone’s lips these days is whoreson. People mutter it into tankards of beer, shout it at dogs, sing it from the rooftops. Some drawl out both syllables, others crush them together into something like “hawson” or “orson.” If any character in The Witcher 3 lets slip an exclamation as mild as “son of a bitch,” it is only a supplement to their rich diet of whoresons and fuckers. When you’re actually introduced to a character named Whoreson Junior, you wonder how often he thinks other people are addressing him by mistake. It’s like being named Mr. Hello.

Whoreson is a constant presence in the script of Witcher 3, as cocksucker was in Deadwood or frakking was in Battlestar Galactica. (For old fans of The Witcher, no term of abuse has greater sentimental value than whoreson; a prison guard howls it at you in the opening lines of Witcher 2, and you can scarcely walk into a room after that without hearing it again.) The latter followed the old fantasy and sci-fi custom of finding an antiquated or invented word to stand in for familiar obscenities. But it’s rare to add Shakespearean novelties to your swearing lexicon while also keeping all the regulars in rotation, as The Witcher does. Its characters may use the earthier, peasant-inflected ploughing to mean fucking, but they also say fucking all the time; there simply aren’t enough words for all the cursing they need to do.

The results may not be up to the Bard’s standards, but they’re always inventive. The game’s dialogue rolls along in its own rhythms, with undercurrents of humor and compassion that build quietly and then strike you all of a sudden. The extravagant profanity is only the most visible evidence of a robust and unusual vocabulary. All of the Witcher games share a deep reverence for their source material—Andrzej Sapkowski’s books about the mutated monster hunter Geralt of Rivia—but they now far exceed the English translations of those stories in their mastery of language. The game can verge on parody in its relish for the lilting tones of a heiress or the ‘umble suggestions of a farmer, but it manages to wring humor and pathos out of virtually everyone, in all their diverse modes of speech. Like Gone Home, it’s one of those scripts that reminds you of how badly written most games really are.

There’s such a surplus of great lines that many are dropped unannounced in the background or spoken in quests most players will never find. “In this hole, this reasty mire … what could go right here?” a character muses. As looters pick over the bodies on a battlefield, one urges his fellows: “Hurry, afore the corpse-eaters wamble out.” A man bleeding out on the floor of a tavern asks a witness to “Pour me a nip atimes.” A servant scrubbing mansion floors mutters that “Nothing hurts so much as life.”

In these and other inconsequential scenes, minor characters are suddenly invested with life by a team of writers who hold themselves to a higher standard than anyone else working in their genre. Would a company like Bioware ever trust their audience to know the word “reasty”? They spent a whole development cycle making one city, and they named the bad part of it “Darktown.”

The Witcher 3 is never less than human. Even the game’s journal has its own garrulous voice: as in The Witcher 2, it’s an in-world work by Geralt’s friend, the bard Dandelion. Notes pinned to the public notice board in each village are capsule tragedies and comedies: there are personals ads, a doleful announcement that “Our Bilberry’s Died,” and a message from a new father seeking advice on naming his daughter. A running series of notices warn readers about the crimes of the wandering drunk Odrin, a very minor character from Witcher 2; somebody even found the man himself in the city of Novigrad, asleep on a pier.

No other developer has brought an open world to life the way CD Projekt Red has here. I can’t imagine what it cost. Novigrad is a great rambling metropolis, full of sinking buildings tilting against one another, jagged alleys, luxury brothels and cheap brothels, various taverns, a theater and a sauna, warring gangs of criminals, glowering shirtless sailors on the docks, monied cultists wandering the temple district, and persecuted mages hiding out in basements. Even standing in a refugee camp in neighboring Velen, you can see the city lights burning at night. Compare that to Dragon Age: Inquisition’s Val Royeaux, a half-finished impression of a city that could only be fast-traveled to, and which holds little more than a courtyard, a cafe, and a few shops.

The Witcher 3 is not the sort of cynically-designed game we’ve grown used to, in which designers create little narrative façades without committing the resources to build a full story. It is generous in everything, from the torrents of cursing that pour from characters’ mouths to the amount of detail packed into their apartments. Before beating the game, which I did not really want to stop playing, I finished every Witcher contract and all the secondary quests I could find, except the collect-every-card one. (If this review was any later, it would be a Game of the Year recommendation.) Almost all of them contained a moment that was simply a gift: a genuine surprise, a solid joke, a memorable grotesque. In the hallucinatory “Cave of Dreams,” a bright blue whale swims peacefully over your head; in “Lord of the Wood,” an ancient root-monster casually walks behind a distant tree-trunk and steps out from one much closer, in an effect worthy either of Magritte or The X-Files. Even a series of bare-knuckle fistfighting bouts—the paradigmatic low-effort questline—builds to an outlandish conclusion.

those who venture inside it never return

Comparison to The Witcher 3 would embarrass almost any RPG. It excels at everything most games suck at, from comic timing to narrative follow-through. It has the most expressive faces, the best drunken banter, the funniest throwaway gags, the most casual sex, and the deftest camera movements. But its best trick is to mold narrative from the materials that games have lately used as a sort of flavorless stuffing. In almost every side-quest and monster-hunting contract you undertake, there are telltale signs of someone at CD Projekt Red actually giving a shit.

The moment that brought this home to me was not part of the mostly wonderful core story, which is somehow true both to its literary source and to the developer’s own characters, which have accumulated over the last two games. Nor was it one of the big secondary quests that can affect the story’s endings. It was an optional, even dispensable late-game sidequest on the island of An Skellig, “The Tower Outta Nowheres,” that had nothing to do with anything. A tower appears overnight on the rise above a village, accompanied by an unending storm; those who venture inside it never return. A local hires Geralt to investigate, explaining the situation to him as they stand under a line of wet laundry.

Geralt goes in and eventually solves the problem: the tower disappears and he’s flung out of a magical portal into the ocean. He only has to swim back to town and collect his pay. But there’s nothing perfunctory about the way the game handles this. The entire village comes out to the water’s edge to greet him. The storm has broken and they can fish again, so they’re all in good humor. They crack jokes and thank him; a kid asks for flying lessons. “Never seen such marvels in me life!” someone says. As the crowd disperses, a man lingers to ask about his brother, who went into the tower earlier. But the guy was dead when Geralt found him (the people Geralt is hired to find are always dead). “Ahhh,” the man sighs, having figured as much.

I don’t think I’ve ever seen a game’s protagonist get such a hero’s welcome after an out-of-the-way job. It’s a whole standalone scene with thoughtful camera movements and blocking, four voiced roles (not including Geralt), a small dialogue choice, and even a memorable line reading from the last guy. It’s a low-key but oddly moving ending, a rush of gratitude when you expected nothing. That’s the sort of trick The Witcher 3 pulls off all the time: emotion out of nowheres.