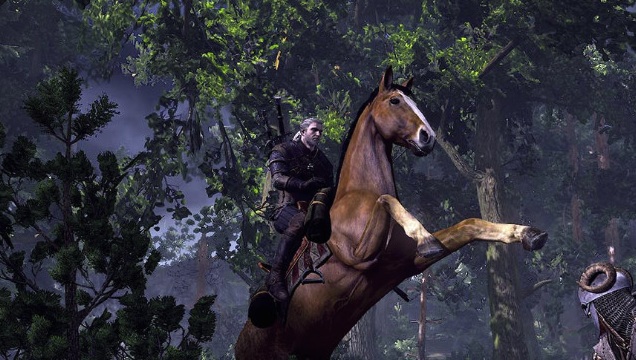 Wednesday, the Polish developer CD Projekt RED announced The Witcher 3, the latest entry in their fantasy RPG series about a white-locked alchemist in a morally-ambivalent middle earth. But we’ve known it was coming since a week ago when some people on the internet found a secret message in the trailer for Cyberpunk 2077. In all the news that’s surfaced, the most vital is that it will take thirty to forty minutes to cross the world on horseback.

This is great, but not so great.

Don’t take this the wrong way. We have a large degree of respect and love for horses here at Kill Screen, and that will never change. These majestic beasts are steadfast, tireless, rustic. In games, they’re legendary. The first time I heard you could ride a horse in The Legend of Zelda: Ocarina of Time, I was incredulous. But when I saw for myself, her tail and hind hooves reflecting in my high-school friend’s spectacles, I had to have the game right away. Epona jumping the fence at Lon Lon Ranch was a defining moment for me and for gaming.

We need some valiant real or imaginary animal and/or vehicle, exclusive only to videogames, that can get us from point a. to point b. faster.

However, as controversial as it may sound, there are plenty of arguments against horses. For one, a horse broke my sister’s arm when it threw her from the saddle before she quit taking riding lessons. Two, and this is my real point, they’re plainly inefficient at crossing the plains and the prairies of open-world wildernesses. It’s impossible to hate on the faithful steads from Red Dead Redemption, who were always ready at a whistle. But truth be told, when I needed to get from Mexico to Texas, I was wishing it had wings.

What I’m preposing here is radical. We need some valiant real or imaginary animal and/or vehicle, exclusive only to videogames, that can get us from point a. to point b. faster. Fast-travel options that warp you across the map are nice, but I always feel that I’m missing out on the largest appeal of the game: traversal across digitized nature. But when I’m in a jeep or on horseback, and the landscape is stretching on for ages, I just want to get there already. I thought maybe another animal would do. However the fastest mammals, cheetahs and antelopes and jackrabbits, would be absurd, as would jet planes in most cases.

So we just need to make something up and stick with it. I suppose a really fast horse would work, but that lacks imagination. Someone should ask Hayao Miyazaki. These are imaginary worlds that operate on rules that differ from our own, and our equine companions aren’t cutting it.