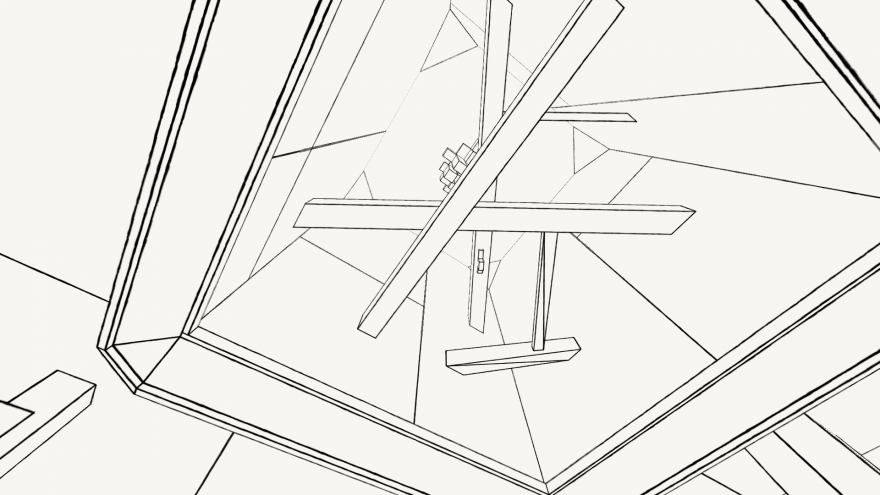 Being stuck inside the four white walls of what could be a padded cell has you desperately spinning on the spot, looking for a way out, at the beginning of Within. By its end you’ll be scrambling to get back inside.

Playing it is like trying to turn your head fast enough so you can see the back of it in a mirror. The delineated walls of its maze are tricksters that hide their passages just to mess with you. They’ll wait until you’ve ran back-and-forth between cul-de-sacs enough times to make you question if the game is broken.

you’re a lab rat chasing the cheese around a maze devised to break your mind.

The walls snigger as they look down at your network of confused footsteps. Only then, when you’re about to give up, do the slopes and doorways appear. This cruel Pavlovian conditioning lacks rhyme and reason so that you never know when you’re circling back on yourself (which is most of the time). Even when you do progress the twisting interstitial corridors defy any map sense.

Then there are the contents of the rooms to contend with. Infinity symbols sit like potent art in the middle of empty galleries. Criss-crossing beams cut up large shafts into sharp geometry as if the webbing of a particularly dangerous breed of spider. Daunting brutalist architecture leads you upwards along thin planks just to entrap you at another dead end.

It feels like you’re a lab rat chasing the cheese around a maze devised to break your mind. Except the cheese turns out to be a shadowy spike-ball of colliding geometry that hunts you. Hearing its loud vacuum-bass droning through the walls is as terrifying as the encroaching sound of thunder on your location. This relentless hunter chases you around the maze as you struggle to figure out which direction is the furthest away from it. It’s an almost impossible situation given that this nightmarish predator passes through the walls that work to deceive you.

The ever-shifting contours of this 3D maze invites a comparison to the perplexing puzzle spaces of Antichamber, but it’s not warranted. Whereas in Antichamber you gained a masterful understanding of how to navigate its interconnected rooms, Within makes less sense the more time you spend with it. It has a dictating nightmare logic that serves only to lead you back to the same terror you just tried to escape.

Within‘s creator calls it an “experimental” game. But what they don’t tell you is that it’s you that is the experiment, not the implied virtual spaces, and that you’ll be trapped inside this puzzle box against your protests. As hellish as that may seem, it’s a powerful reminder of the architectural terror that’s possible to realize with the endless expanses of virtual spaces.

Within can be downloaded for free on itch.io.