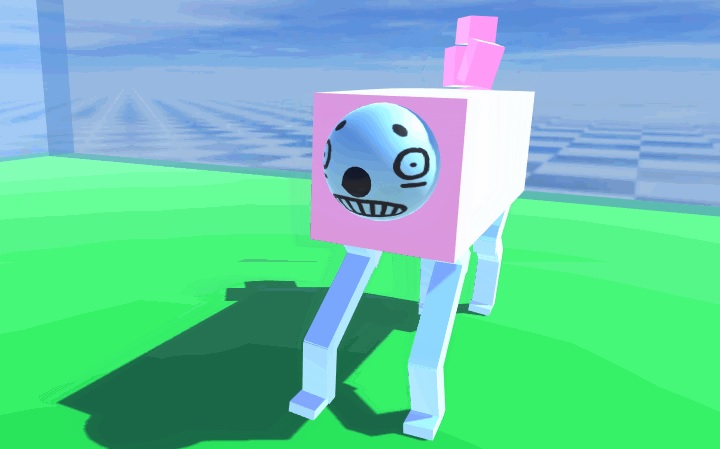 My favorite Dwarf Fortress (2006) update briefly describes the elimination of a bug wherein cats were ”dying of alcohol poisoning after walking over damp tavern floors and cleaning themselves.” The causal logic that leads to an issue like that is both immediately understandable and completely ridiculous. These sorts of unintended consequences are at the core of games that rely on random interactions to tell stories and create characters. The generating algorithms have to be precise and functional to produce readable results, but if there’s just enough noise, things get weird and funny with it.

Tom Astle is working on a project called Wobbledogs that combines the fun of watching computers try to tell you what dogs look like with the fun of watching dogs do, well, anything. My real dog steals shoes and the occasional vegetable. Astle’s virtual puppies had an issue where they “would kick [small food objects] as they walked up to them and get stuck in a loop of chasing them around the pen.”

as adorable as it is horrifying

“It was pretty funny,” he says, “but also a great way to guarantee that all the dogs [would] starve.”

His ultimate plan for the game is to allow the player to breed and train a multitude of goofy-looking dogs. Nintendogs (2005) is plenty of fun, but it’s pre-packaged, and sterile—Astle’s game is as adorable as it is horrifying. The face painted on every dog has enormous eyes and teeth. Wobbledogs is also intensely specific, with every interaction controlled by physics or the dogs’ different desires. Astle writes, “Every time I add something I try to think about how it could play into dog uniqueness.“

Dog’s appearances are defined by “genes”—a long string of 1s and 0s that are translated into fur colors, leg lengths, widths etc. Over the course of the hilarious breeding process those values can “mutate” (by flipping from a 1 to a 0 or vice versa) and produce a slightly different dog, meaning you can select for or against certain traits. Behaviors, meanwhile, can be trained with scolding and rewarding based on what you want to reinforce. Dogs have rudimentary memories, too, so they might pick a favorite spot to sleep, or figure out where you always place the food.

Reading what Astle has to say about his goals, successes, and failures is a great time, and it’s peppered with excellent GIFs of dogs flying through hamster tunnels or waving their bendy sausage bodies and big ol floofy tails around. For real, just look this little monster dog in its terrified little face and tell me it is not the cutest mistake of virtual genetics you’ve ever seen.

You can follow the outstanding Wobbledogs devlog on TIGSource.