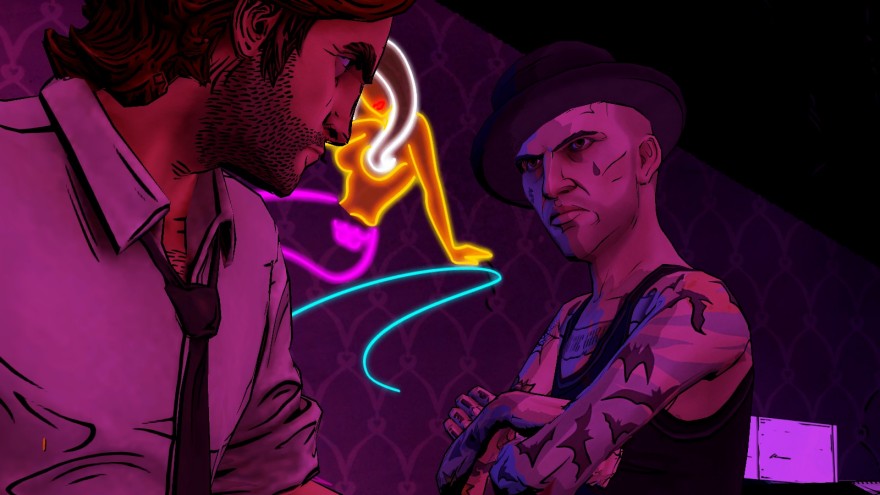 Title:
Wolf Among Us: Episode Two, Smoke and Mirrors

With as nebulous a name as Smoke and Mirrors, it’s unsurprising that the second episode of The Wolf Among Us doesn’t land as well as its predecessor. Telltale’s followup to the enjoyable first episode of its serialized fairytale noir, like its title, is sadly lacking in substance. While the narrative prolongs the momentum and suspense of the tension-infused Faith, it is unable to stand on its own as a singular experience (unlike the dark short story that unfolds in The Walking Dead‘s second installment, Starved For Help). Given Faith‘s final dour note back in October, the clipped pace can’t help but feel something like a cheat.

For those who have just tuned in, The Wolf Among Us is a fantastical detective story set in 80s New York focusing on Bigby Wolf, the sheriff of a displaced community of fairy-tale has-beens. Wading through the sorted underground of Fabletown, Bigby follows a trail of clues in pursuit of the serial murderer from Episode 1. If there were any doubt that Bill Willingham’s dark Fables source material plays hardball, let it rest: the Georgie Porgy of your nursery rhymes has become a tattooed pimp who teaches the Little Mermaid how to pole dance in his strip club. Aside from a few basic point-and-click investigations, the narrative involves players by giving them numerous dialogue choices that affect Bigby’s character and his relationships with the storied denizens of Fabletown.

While every scene, setting and character brims with personality, the experience feels rushed.

The game itself continues to boast Telltale’s characteristically sharp writing: the problem is that there’s just so little game. Bigby’s investigation takes him to approximately four places, being spoon-fed evidence until the cliffhanger twist and hurried fade to black. While every scene, setting and character brims with personality, the experience feels rushed. And for this reason, moreso than its predecessor, Smoke and Mirrors is sorely lacking. The relentless pacing and focus on finding the killer rob the middle and final acts of their appropriate emotional weight, seemingly more concerned with moving the plot elements into place to deliver the episode’s final dramatic cliffhanger.

Telltale have modeled their games after prime time serials, replete with recaps and “next on” teasers. But in the great serialized narratives of Dickens and quality television, it is the characters who carry the story forward. The strongest moments in the narrative are those in which the player makes character-defining choices: how he comforts a frightened child and placates a fighting couple should matter more than discovering the next likely suspect. As in most stories, it is the characters who will stay with us long after the plot has finished, and if there is one area in which Smoke and Mirrors suffers, it is that these crucial character moments are given backseat to the plot, which barrels forward at a breakneck speed and seems to end too soon, without giving Bigby many significant choices.

What scraps of interactive drama Telltale does include are quality stuff. Bigby’s introduction to Georgie Porgy is particularly striking, accompanied by a desperate 80s guitar riff and the fittingly awkward pole dance. The dialog and choices allow one to nuance Sheriff Wolf a shade or two in either direction, to lend him the tortured depth so fittingly prescribed by his contemporaries. Yet the meat and bone of the story is wanting. Shock twists and cliffhangers are the lifeblood of a serialized narrative but Smoke and Mirrors‘ middling 90 minutes of playtime seems anemic. When all five episodes have been released and players are able to cycle directly to Episode 3, the bare-bones investigation of Smoke and Mirrors likely won’t seem so much like stalling as it does right now, with numberless weeks or months until the release of the next episode.