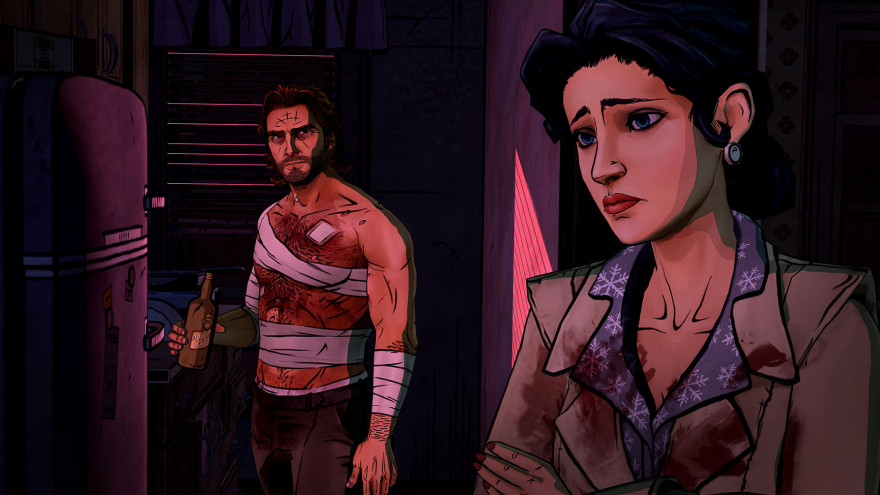 Title:
The Wolf Among Us: Episode 4

There were three surgeons traveling the countryside practicing their art, and one night they stopped by an inn to boast. On a bet, one cut off his hand, another gouged his own eyes, and the third plucked his own heart from his chest. They promised the innkeep’s daughter that in the morning they could mend themselves. However, because of a careless mistake on the daughter’s part a cat made away with the organs; desperate with worry, she replaced the missing organs with a hanged thief’s hand, a cat’s eyes and a pig heart.

In the morning the three surgeons reattached their organs and, boasting of their prowess, went on their way. Not much time passed before they realized something was wrong. One surgeon could not stop himself stealing, the second couldn’t help but see every white mouse in its hiding place and the third wouldn’t stop sniffing in the dirt for truffles. They returned to the inn demanding their true hand, eyes and heart, and threatened to burn the building if they weren’t given recompense. The innkeep gave them all he had and more, and the three surgeons left rich men, though each would have preferred his own organ.

An act of hubris turned Dr. Swineheart strange; his blind anger made him rich.

The Wolf Among Us‘s penultimate episode opens with the third surgeon, Dr. Swineheart, treating Bigby Wolf’s injuries as the sheriff’s jagged ulna juts through his forearm. The scene, Bigby smeared in gore and cradling the unset bone, is the most striking in the episode. But it is the knowledge of every Fable’s past that is arguably the most unsettling. An act of hubris turned Dr. Swineheart strange; his blind anger made him rich. Though the idea isn’t explored here, it’s an interesting thought experiment to imagine what one of Grimm’s three army surgeons would think to find himself displaced with all the rest of the Fables, treating a community of outcasts in Brooklyn so much later. Does he regret his lack of mercy there at the inn, all those years ago?

The sense persists that every Fable, like the three surgeons from the Grimm Fairy Tale, have lost something—some true thing—and, like the three surgeons, are reduced to threats, lies, cheats, in an attempt to get it back. Beauty and Beast hang onto the past by racking up debt to the Crooked Man and accumulating useless paraphernalia for their tiny apartment. The Woodsman cracks skulls to get back the last reminder of his glory days, an enchanted axe. With no happily ever after in sight, the Fables fixate on what they used to be, or whatever appetite it was that drove them originally. “We have to find our own way: grasping and fumbling in the dark,” the Little Mermaid confesses in Sheriff Wolf’s office.

This uncertainty dominates In Sheep’s Clothing. Even those Fables “on the inside” like Beauty and Beast are slowly being pushed to the fringes, where they are preyed upon by the Crooked Man. What little plot there is in this fourth episode is concerned with revealing the extent to which the Crooked Man has infiltrated Fabletown; those who cannot find refuge in the broken system find a place in the Crooked Man’s family where they can work, provided they work relentlessly. He is indiscriminately accepting and merciless. It is this consistency, the game suggests, that draws each Fable in. There are no secrets, no nuance out in the wild beyond: one must serve their role or perish.

There is a shadowy reflection of the Three Surgeons tale in the game’s sleazy pawnshop. The Lucky Pawn is stuffed with magical tchotchkes inherited from the hapless Fables in Bigby’s community, often found or stolen, or sold out of desperation. Who is Faith without her donkey skin coat, the Woodsman without his axe? The past is as ephemeral and subjective as the opinions of those who tell the stories. But when the people of Fabletown trade their very personhood for the past (as Beauty and Beast have, working for the Crooked Man to sustain an illusion of wealth), the results can be devastating. Every Fable can either howl for settlement like Dr. Swineheart did in the Three Surgeons story, or they can put their nose to the plough and keep on.

Who is Faith without her donkey skin coat, the Woodsman without his axe?

The Wolf Among Us has strummed an uneasy tension since Episode 1: the question of whether or not the Big Bad Wolf, much like Dr Swineheart, made an unwilling exchange of his heart—his old nature—for the new. In this chapter, Telltale have backgrounded this tension for the more standard investigative plot. In Sheep’s Clothing is not a particularly strong episode of The Wolf Among Us, largely because it doesn’t have to be. So much of Episode 4 is table setting for the upcoming finale that the episode never finds its own identity: it’s all middle. There’s no real beginning or end, no narrative arc.

In large part, the ultimate success of The Wolf Among Us rests on how well Telltale handles Episode 5. Will Bigby’s often ill-gotten attempts at philanthropy (rather, philanthropomorphy) yield any fruit in the climax? And will that climax provide something deeper than the spectacularly bloody setpieces Telltale have relied upon to this point? We have nothing else to do but wait and see.