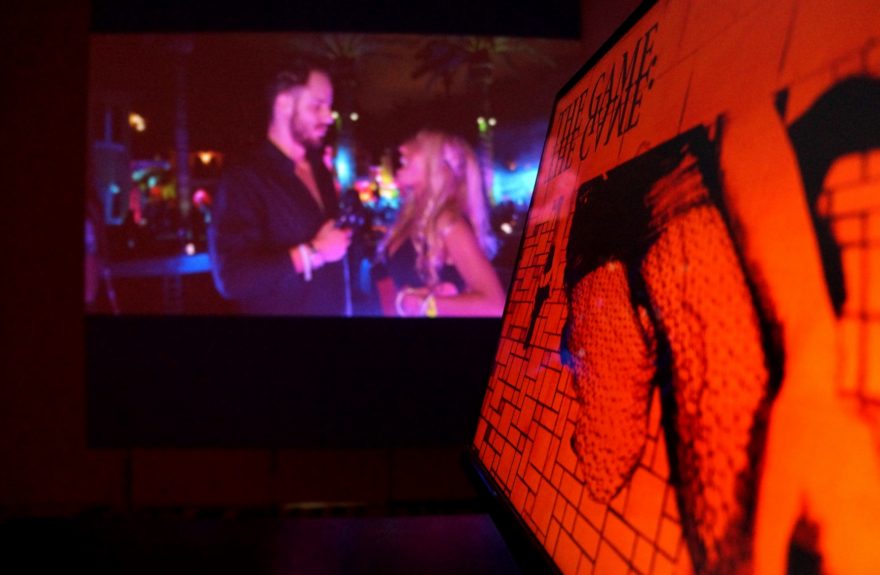 The dating sim has been experiencing something of a reexamining of late, finding itself in the broader public eye as iterations upon its core tenants are warped, distorted, and pushed past their typical use cases. Whereas dating sims were once predominantly focused around a male protagonist trying to date—and eventually have sex with—beautiful women, the modern dating sim is unbounded. It rejects the notion that a potential partner is hetrosexual (Kindred Spirits on the Roof and Don’t Take It Personally, Babe, It Just Ain’t Your Story), “perfect” (Katawa Shoujo), or a human at all (Hatoful Boyfriend and Hot Date). The modern dating sim focuses on the idea of love, writ-large, and is less concerned with the titillation of the player or upholding what could be seen as “normal,” “right,” or “obvious.”

Angela Washko, the prolific game art (and now art game) creator of “The Council on Gender Sensitivity and Behavioral Awareness in World of Warcraft“ and Free Will Mode, a project curated into the Memory Burn gallery show, among many other projects, is continuing to push the dating sim forward by reflexively focusing on dating itself. Upending the idea that the game must only tangentially acknowledge real-life dating, Washko’s latest exhibit titled The Game: The Game centers around its female protagonist’s interactions with real-life Pickup Artists like Julien Blanc and Roosh V—people whose work focuses on teaching men how to get women to have sex with them. “The Game” of The Game: The Game refers to this “skill,” and forces you to be on the receiving end of these teachings, an experience that is, perhaps unsurprisingly, unsettling.

The game, debuted at the Transfer gallery in Brooklyn, is overwhelming. Far outside the cozy narratives of “just finding love” forwarded by even the most progressive dating sims, the cumulative effect of having to reckon with the in-game characters (only Blanc in the version I played) and an ominous soundtrack by Xiu Xiu, makes the player feel supremely assaulted. In addition to that, the curation of the space at Transfer featured Blanc himself on a screen preaching his teachings, as well as women-as-object postcards painted on the ground. It casts a different shade of light on other dating sims (and dating in general), forcing an increased sense of awareness about the receiving end of whatever mechanic you’re exploiting to woo a woman. It literally places you in the shoes of someone who could be thought to be on the receiving end of some other player’s own dating sim.

“When two or more people think they are playing the same game, but are in fact negotiating different rules, and when each player’s meta-participation in the game that they think they are playing is through the self-aware persona of a player (of those different games), then decoding the signal, niche, and response boundary cues of who is saying what to whom about what and why lends to interpersonal conspiracy theory and comic obliviousness.”

Except that, in the case of The Game: The Game, we are able to pin down what the men are saying, as it’s backed by their words, pulled from the material they’ve contributed to discourse around “the game.” Washko uses this ground truth as an inflection point, and injects her own game in front of the game that people like Roosh V and Blanc are known to be playing, forcing each “player” to reckon with the the realities of the other. Washko is giving a voice to those that are forced to be a target of the tactics of these men, empowering the player to simply not be a consenting agent to the taught tactics of a pickup artist’s game, offering the potential for an alternative narrative to the one forwarded by the books of Roosh V and videos of Blanc.

attacked and rated on how “bangeable” she was

This agency given to the player, to be implicated in both their game and their own, is important. Washko gives her players a wide range of dialogue options to choose from in each scenario, allowing them to choose whether or not to let Blanc “win” or “lose” at the game he is playing. Your victory state, as it relates to his, is unclear, and purposefully so; Washko sees you as a consenting adult, implicated in whatever passes, able to cognizantly choose what to say, reflecting the fact that Blanc’s real-life tactics do sometimes work for some people.

The environment Washko creates around these situations and the agency the player is given is part of her larger, ongoing exploration around cultural touchpoints—those that position women as objects, as well as a critical interrogation with pickup artists and their tactics in general. After a lengthy performative Skype interview with Roosh V, she found herself wrapped up in his community as well, attacked and rated on how “bangeable” she was. This was one-sided though, and The Game: The Game acts as her response to this; her act of looking and examination passed to other players, in hopes that they too can see what she has been looking at. The Game is not meant to be derogatory or condescending, as stated above, all of Blanc’s lines are pulled verbatim from his own videos, but when placed in front of someone with agency not typically granted by someone like Blanc, his advice turns seemingly malicious.

The game-ness of The Game: The Game, crystallizes the points Washko has been getting at ever since she first interviewed Roosh V. Though they speak of having sex with women like a game, the complex dynamics of social scenarios make such a discrete projection difficult, as each new bar, each new club, has a different set of challenges that allow them to obscure any dismissal of what they do as fundamentally flawed or misguided. These differences allow people like Roosh V and Blanc to slip through criticism of their own failings (evidenced in Blanc’s videos specifically), but with Washko’s game, their movements and their tactics are mummified, allowing the player to pass over them multiple times, through different vectors, while external factors remain constant. The “game” is laid bare and illuminated in The Game as Washko shows that there are, in fact, two players, not just one.

Find out more about The Game: The Game on its website.