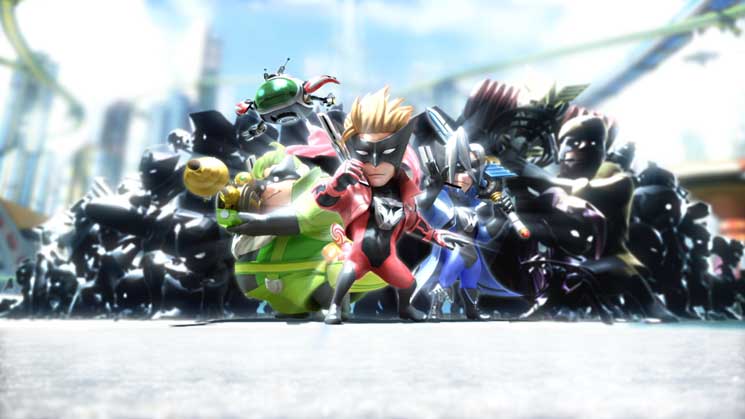 The Wonderful 101 is kind of a mess. Some messes can be pleasing—think the alluring chaos of a Jackson Pollock—and some are not, like the toy-filled floor of an irresponsible toddler. At times this Wii U exclusive action game, directed by Hideki Kamiya, brings to mind Pollock’s spackles: glorious in its randomness, forged by the mysterious beauty of luck. Sometimes, though, it feels like that floor filled with toys, their sharp plastic pegs sticking in the soft undersoles of your bare feet, day after day, no matter how many times you’ve asked the child to pick them up.

You control a mass of up to one hundred tiny heroes, each a part of some intergalactic world-saving coalition brought together to save humanity. Power Rangers these are not: behold Wonder-Beer and his frosty mug ‘o brew for a head; Wonder-Signal is a working traffic light; Wonder-Ribbon is a rhythmic gymnast; Wonder-Kung Fu knows, well, Kung Fu.

Except, of course, that he doesn’t. These characters don’t have specific moves or abilities at all. Instead each fits into one of a few categories, aligning with five color-coded main heroes and their power. By drawing on the Wii U Gamepad (or swirling the right thumbstick) in a particular shape, these miniature action figures combine to form one of several weapons: a circle makes a red fist, a line makes a blue sword, a right-angle makes a green gun.

What begins as an arcade-style brawler often will slip into a slapstick cartoon, or an interactive meta-joke.

Alone, they are but fancy foot soldiers. Oh, how I wish to know Wonder Toilet’s anti-clogging capabilities! Wonder Gamer’s face is a Famicom controller, the Japanese predecessor to the NES; imagine entering a cheat code onto his facial features (eyes, eyes, mouth, mouth, nose, ear, nose, ear, chin, cheek). Wonder-Painter is captured in a frame, his visage a chunky blog of cubism. Might his face change styles to overcome different obstacles? No. The titular hundreds are each individually rendered in humorous detail on-screen but ultimately a cog in some very complicated machinery.

But while The Wonderful 101’s brusque behavior took me aback, its personality started winning me over. What begins as an arcade-style brawler often will slip into a slapstick cartoon, or an interactive meta-joke. One boss battle begins with an extended conversation between Wonder-Red, the main hero, and his newly-revealed nemesis. The Big Bad says his backstory will take between fifteen and twenty minutes to tell, if you’d like to hear it. And so he explains his youth, his schooling, that one day that would change his life forever. For such a fast and chaotic game, it delights in slowing you down on purpose, almost to poke fun at how action games start and stop in order to tell inane stories that add little to the experience.

At another point a spaceship flies onto a giant robot’s shoulder socket, forming a massive ship-arm. This ship-armed robot jumps and lands on top of a tower, and your heroes brace themselves. An expectant beat: This is your next epic battle. But then the robot slips, falling to the earth below. (Spoiler: you still fight him.)

One of these many things is the cause of my destruction, but which I can’t verily say.

I love the poked holes in all this unwarranted drama. I don’t love when the game expects you to know what it’s thinking and then punishes you for your lack of clairvoyance. Too many times I died, the screen blinking off as in a power outage, having no idea what killed me. My sense is this is purposeful, another jab by its creator against our modern expectations, or the training-wheels-ification of contemporary game design. My dozens of controllable heros move as a loose swarm of angry bees; the tiny enemy soldiers blend into the background; two mech-walkers covered in spikes shoot missiles into my horde, spraying them and knocking them unconscious; heaven-sent lasers blast me from some unseen cannon. One of these many things is the cause of my destruction, but which I can’t verily say.

This is my fault. I died because I can’t keep up. I suspect it’s due to pacing, or my own lack of stamina. I get tired. My eyes fail. Whatever part of my brain that sifts through visual stimuli shuts down from overuse.

Indeed, Kamiya, famed creator of Viewtiful Joe, Okami, and Bayonetta, brings the same visual energy and ecstatic perspective to his latest. But it’s this same high-octane sensibility that breeds game sessions which feel almost caustic to the player. With The Wonderful 101, Kamiya ripped off those training wheels, duplicated them, lit them on fire, then tossed them to you all at once, expecting you to juggle.

Sure, we’ll bruise our elbows and knees. But the scabs heal stronger each time.

But, but, but. That’s the lovely thing about high expectations: You’re forced to learn to survive. There is a system at work here and you need to understand it before finding success. Taken this way, design that at first feels aggressive or stubborn becomes something more hopeful. Kamiya doesn’t mire the game in tutorials or step-by-step instructions because he trusts us. Sure, we’ll bruise our elbows and knees. But the scabs heal stronger each time. Soon we feel nothing at all.

As the enemies repeat you gain a sense of their weaknesses, and with each passing mission you understand better how to make sense of the screen. The Wonderful 101 is that kind of game where, after suffering through it for a dozen hours, you beat the game with a final halting movement, muscles replete with a lactic acid pain, mind blurred from the incessant visual puzzle-solving, and then with that final blow the game clicks into place, like a hundred tiny bodies forming a clenched fist, and suddenly what were hieroglyphics become language. What sounded like aimless noise reveals itself, at last, as song.