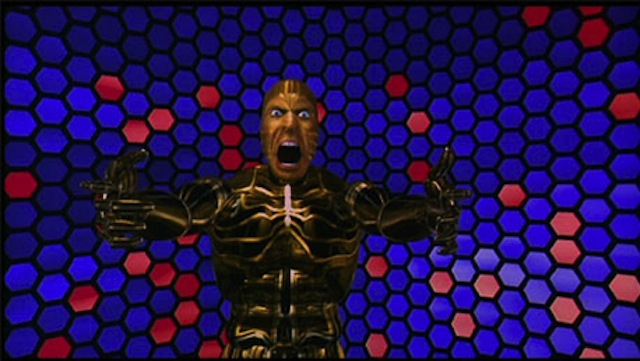 Last Sunday, the Times ran an article about Valve called “Game Maker Without a Rule Book”. What I took away from it was this: Steam is shaking up the games industry (Valve doesn’t have a rule book, so it can’t help but shake things up), one employee doesn’t know who the CEO is (turns out it’s Gabe Newell), and the reason he doesn’t know is that Gabe is some humble-swami combo of Jerry Garcia, Steve Jobs, and a bear. Getting profiled by the Times is definitive business, and I was very nearly convinced of Valve’s status, except, there is this photo of a man wearing a bulky metal helmet on the first page. In the picture, the mask is connected to an orange power cord, secured by electrical tape, running down the man’s large arm and extra large t-shirt that doesn’t look ironed. Either Valve employs a white MF Doom, or they are building a virtual reality headset, or gosh, both.

“Behold the future of video games,” the second paragraph said. Oh? A headset? Virtual reality has been dead since, what, 1992? Is this a team of cultured, forward-thinking programmers and computer engineers or a band of Lawnmower Man revivalists? Before you go and take that the wrong way, let it be known here, there, and everywhere, that Valve has done undeniably huge stuff. Steam, Half-Life, Portal.

But I’ve always pictured Valve as a real-life version of Aperture Science, the fictional research company featured in some of their games that specializes in making smart aleck robots. I totally expected them to be secretly working on a portal gun, so that I no longer have to use stairs, or walk to the mailbox. Instead, a VR helmet? Thanks for nothing, dudes.

I guess it isn’t so surprising. Tech companies are famous for coming up with irrelevant pet projects to keep themselves busy. Microsoft made Flight Simulator and Songsmith. Google has self-driving cars and mirror shades and, formerly, China. At least those were good publicity stunts. Valve is facing a landscape where big budget games are gradually losing their profitability to the Fruit Ninjas and Infinity Blades of the world. I doubt Valve is creatively bankrupt, but I get the feeling companies that specialize in shooters don’t always know what to do next. That’s why John Carmack––president of id, which created Doom––was donning an Oculus Rift at E3.

What I can’t figure out is why anyone would want to enter virtual reality in the first place.

1. It’s bound to be stuffy inside that helmet. Bad for your T-zone, a potential bonanza for OxyClear.

2. The screen is like two inches away from your eyeballs. I have a Virtual Boy, and I can tell you, one does not blink the entire time. After a while, it starts to feel like behavioral reconditioning with Anthony Burgess, with an EEG reader strapped to your forehead, and appendages that look like little crab claws prying open your eyelids, but without the beneif of a nurse applying Visine to your eyes.

3. How am I supposed to tweet about this disgusting zombie who vomited on me as I chainsawed its mother?

That raises another important question: who besides Charles Manson would want to be any closer to the grotesqueries in a game like Left 4 Dead? I take comfort in the degree of separation provided by my computer screen. When Jaron Lanier first dreamt up virtual reality in the ‘80s, he envisioned it with wild-eyed idealism, saying that it would complete culture by allowing people to communicate beyond symbols and experience real empathy, or something like that. An account published in 1989 says that when Lanier used his VR goggles, “he was on the carpeted floor, sprawled with his mouth open, slowly writhing into a new position.”

I guess what I’m trying to say is, if I can’t have virtual self-enlightened Kama Sutra mind sex with the universe, you can count me out, bro.