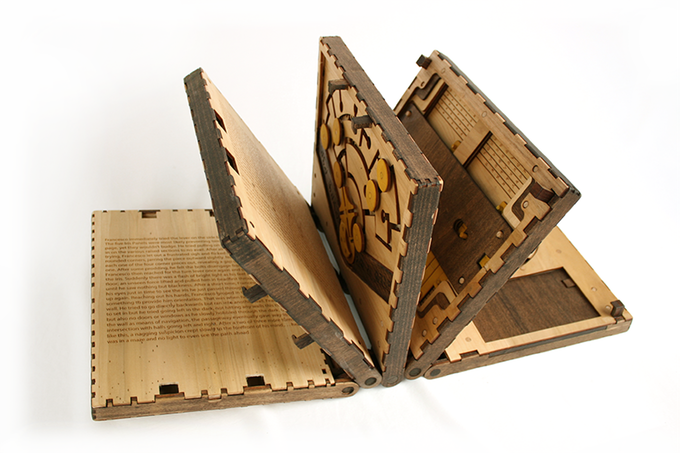 The Codex Silenda is a set of intricate wooden puzzles that quickly reached its funding goal on Kickstarter many times over. It’s the kind of object you’d expect to be hand-carved by a slightly eccentric artisan, but it’s laser-cut, and one of the reward tiers gets you the pieces, which you would then assemble into the puzzle yourself. As it turns out, the laser-cutter can do for the mechanical wooden toy what the printing press did for books.

There were books before the printing press: painstakingly hand-copied manuscripts with margins full of knights jousting snails, but hand-written and hand-bound books represented a huge investment of time and money, not just for the book itself, but for the expertise necessary. The press itself is often credited with bringing about a new age of education and literacy—books were suddenly significantly cheaper to produce, and therefore more common and easier to move from place to place.

Expertly hand-carved wooden objects have a long history—the cuckoo clock is an icon of German engineering and craftsmanship, and multi-step Japanese puzzle boxes are more about the experience the box provides than whatever object is hidden inside it. The Codex Silenda and all its moving pieces call back to these forms, but it is not worked over by a woodcarver making one at a time and selling them as luxury items, it’s made by a designer with the help of a laser-cutting tool, and they’ve already sold all 600 of them. At a different reward tier, they’re offering the laser files—the Codex can belong to anyone with $80, a bunch of wood, and access to a laser-cutter.

made up of beautiful wheels, gears, and irises

The Codex has five pages, each with a different puzzle that must be solved in order to open up the next one. It is made up of beautiful wheels, gears, and irises, and covered in laser-cut runes. The book also has a story in it, about an apprentice in Leonardo DaVinci’s lab who’s trying to solve the puzzles as quickly as possible. Like the Rubik’s Cube, The Codex seems to be a challenging and visually arresting puzzle, but it’s more pleasant to hold and more attractive to display than plastic and stickers. It is at once an update of an old style of wooden puzzle and a new kind of toy, available only through the help of modern machinery.

You can find out more about The Codex Silenda on its Kickstarter page.