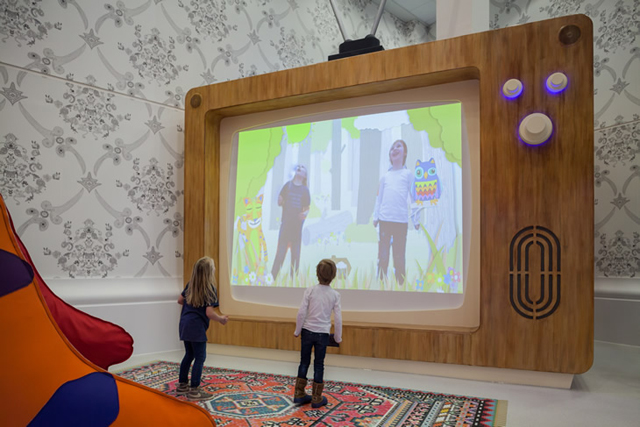 It’s been said many times, many ways – but it’s true that the most interesting uses on the Kinect platform are almost never commercial games. Woodland Wiggle is not only one of the coolest – a combination art installation and play space – it’s also one of the most heartwarming. You see; it’s a permanent installation at The Royal London hospital, aimed at helping sick children heal and deal with the obvious stressors of illness and hospitalization.

Woodland Wiggle is an interactive game displayed on a television the size of a room. Children can enter into a storybook illustrated world enabling them to paint and play music. They can also trigger sun, rain, snow and rainbows weather effects with animated animal characters across a number of woodland scenes.

Working in close consultation with clinical teams at the hospital, and following a series of workshops with physiotherapists and occupational therapists, I was able to determine a range of movements that would give children the best health benefits which strongly influenced the format and design of the games created. The installation had to work with a wide range of abilities, from wheelchair users, visually impaired, to bed bound children, so simple movement filtering allows for triggering of music & paint with just a wave of the hands.

It works by using a Kinect Camera rigged to a massive TV in a big, open room with whimsical objects and bright, inviting colors. It basically looks like the exact opposite of a depressing hospital ward (and that’s the idea).

The accompanying video shows a simple, appealing game played by hilariously hyperactive children, which is always a welcome sight, especially in a hospital. As a pediatrician’s significant other, I know a little too well about the effects of prolonged hospitalization on young children, and just how important it is for them to be able to play and feel normal, no matter how bad their condition.

I also know that this installation will be the envy of child-life specialists the world over.