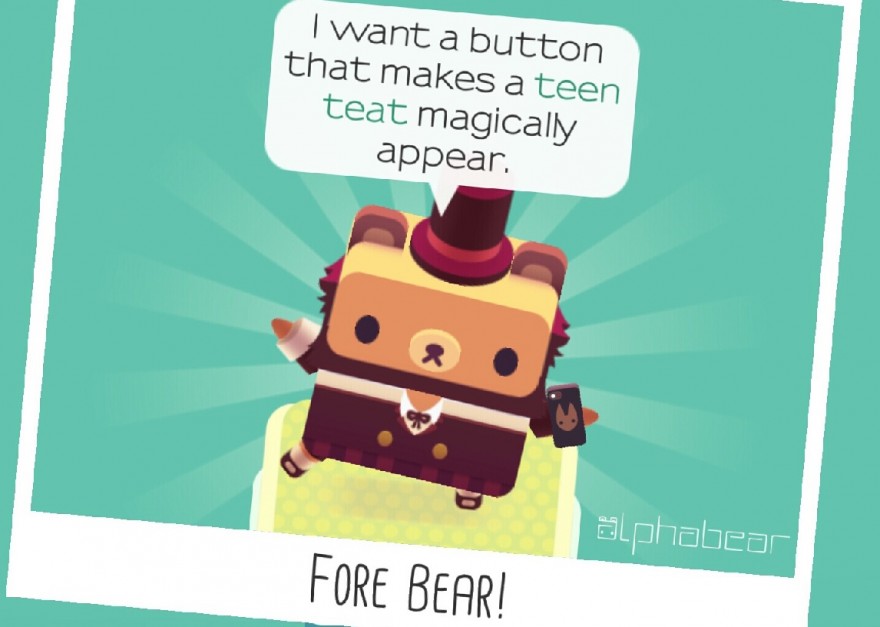 Alphabear is a fun little mobile game. Combining word search puzzles with Neko Atsume’s pet collection mechanic, it draws you in with such adorable characters as Pirate Bear and Golfing Bear, who each possess their own set of unique bear powers—along with a themed outfit, of course. Designed by Brent “Meowza” Kobayashi, these furry little rascals could melt even Dick Cheney’s heart (if it still existed). After picking your bear buddy for the round, he takes center stage on the board, surrounded by letter tiles. It’s your job to make the best word possible, while also expanding your square bear (and ultimately racking up more points) with optimal letter arrangements.

On the surface, the most evil part of Alphabear appears to be the free-to-play model that uses cuteness to blackmail you into paying $4.99 for virtual honey (which is required to play more rounds). Within the first ten minutes of the game, you come to love (and even get hooked on) this world of bear logic and magic, where words feed mammals and mammals wear tiny pants. I mean, what could be more innocuous than a spelling game with little themed bears, right?

Well, from the looks of the screenshots popping up on Twitter, serial killer Jeffrey Dahmer might be one good candidate for the “More Innocuous than an Alphabear Bear” award. Because hidden behind their square frames and button-black eyes is a perverted predator who thirsts for the literal taste of teenaged human flesh.

I’m not sure what he means, but it sounds terrible #alphabear pic.twitter.com/lp1ShWFiSj

#alphabear never accept a ride from a friendly-looking bear pic.twitter.com/6EY2hcCMnN

You see, in Alphabear, every time one of your bears levels up, they say some adorable sentence by randomly selecting your words from the last match. Which is an adorable connect in theory. But in reality, since the source material for these Mad Libs comes from the dirty minds of human beings, things can take a turn for the disturbing pretty fast.

For example, just look at this unkempt mess of a bear, who only needed to play a few rounds of Alphabear with a human before he started expecting other bears to fit a strict beauty standard:

I, uh… I mean… Sure? #alphabear pic.twitter.com/BZGrQAp7OT

Or Mr. Stretch Bear, who developed a decided lack of respect for anyone or anything—especially not your wife. Spry Fox actually responded to the poster, warning that “the bears can be rude. Someone suggested that we add an option to slap them for 10 coins. Not where I thought this game would go…”

Well maybe that’s where it should go, Spry Fox. Because the sass on some of these bears is nuclear, especially when contrasted with the game’s “innocent veneer.” One bear even mocks the classic Got Milk? advertisement campaign with a self-satisfied smirk on his face, replacing the calcium-filled beverage with genitalia instead. Even their pickup lines prove extremely forward at best, and straight up sexual harassment at worst.

the “Mad Libs using the words you made” feature in #alphabear is cute in theory, but then stuff like this happens pic.twitter.com/HKseV8kA0J

In their defense, however, the alphabears can provide some sound advice to players; like what to do in the event of a fart emergency and how to call out a friend for defecating in an inappropriate place. Really, you might as well rename them Carebears, as they flip flop back and forth between considering world domination and taking another nap.

Still not sick of this even a little. #alphabear pic.twitter.com/2Z8RbYmvKs

It’s important to remember that any and all demonic vocabulary uttered by an alphabear could only have been learned through its player. Whats that saying about dogs, again? There are no bad alphabears—only secretly demonic players teaching them horrible language. Something like that? Like a mirror reflecting our hideously adorable souls, Alphabear‘s Mad Libs feature remind us of the insanity lying in wait beneath the surface of each and every one of us. So next time your alphabear gives you some sass, consider your own share in the behavior.