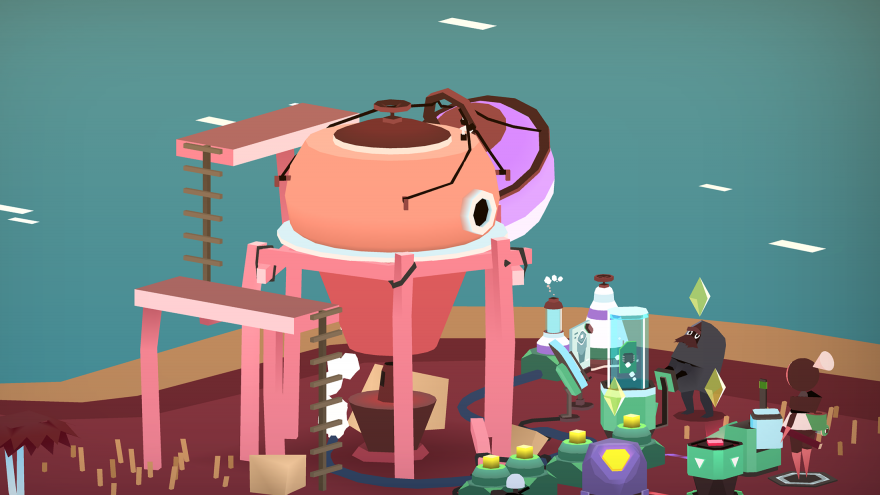 There are no words in Pan-Pan—just bubbling variations of boops and beeps. After crash landing on Pan-Pan’s colorful low-poly world, you’ll be introduced to a bunch of little dudes with bushy ‘staches. They’ve come to your aid after the crash, and despite there being a language barrier, they’re trying to fix your ship. But you’ll have to help. Scattered through Pan-Pan’s knotted puzzles are the pieces needed to fuel your ship and head home.

Curiosity is the language in Pan-Pan. It’s a curiosity powered by the world’s design. Developer Spelkraft uses a visual language to express its intentions; it’s not always obvious, but that’s the point. You’re not meant to solve Pan-Pan’s puzzles in 20 minutes. It’s not always clear where to start: at times, you’ll have to go at it with brute force, wandering around with your stick, hitting everything in your path. Click anything and everything until something starts to make sense. And most of the time, Pan-Pan’s design language is enough to give the clues needed to solve its puzzles, for something to make sense.

A cleverly-placed vase. An apple core tossed to the side.

One of the first puzzles I encountered—and it might be different for you, as Pan-Pan lets you untangle its obstacles as you choose to—required me to work myself through a graveyard-like maze of tombstones. Each tombstone has an eye, or doesn’t. Some eyes are sleepy with drooped lids. Some eyes are caffeine-fueled and wide awake. And some have no eyes. A garden of tombstones in front of the maze serves as an environmental primer for players; it doesn’t give the exact path, but it does give enough information to solve the puzzle. Sometimes you won’t have all the information available to solve a puzzle, though. You’ll have to wander more. But the clues are there, and when you get it, you’ll get it.

Visual cues of this kind are strewn across Pan-Pan’s candy-colored world. For the most part, they work; many of the cues embedded in the environment are important in solving the puzzles. Each area is distinct in its color and mood, so finding an object outside that visually aligns with that area may provide clues as to where it’s to go. There are moments, though, when an object’s significance can be muddled or inflated.

Take the forest area where you meet a strange little woodland fellow as example. This particular bit of land sticks out from a design perspective—visually, it’s much more green than the rest of the space. Fir trees dot the landscape. There’s a pond teeming with life. An owl-like creature watches you as you move through the environment. Fireflies flit around. There’s a tent, too—there’s a character outside, with the same suspiciously-pointed legs as you. These visual clues seem to belong to the game’s puzzle language at first glance but that’s not necessarily the case.  I spent more time than I’d like to admit trying to reach the owl and collecting the fireflies; pursuits that the rest of the game’s puzzles would indicate were my goals in this area. But that wasn’t the case.

I wanted to keep exploring the world of Pan-Pan. Spelkraft is successful in creating a place I want to learn to live in, even if it’s frustrating at times. The clues are there—study the language, and you’ll see it. A cleverly-placed vase. An apple core tossed to the side. Nothing means nothing in Pan-Pan and so my time spent wandering in Pan-Pan wasn’t time wasted. It’s time spent learning a design language and that takes time. It’s trial and error; there are hiccups and missteps. Get curious and take your time. There’s no rush, really.