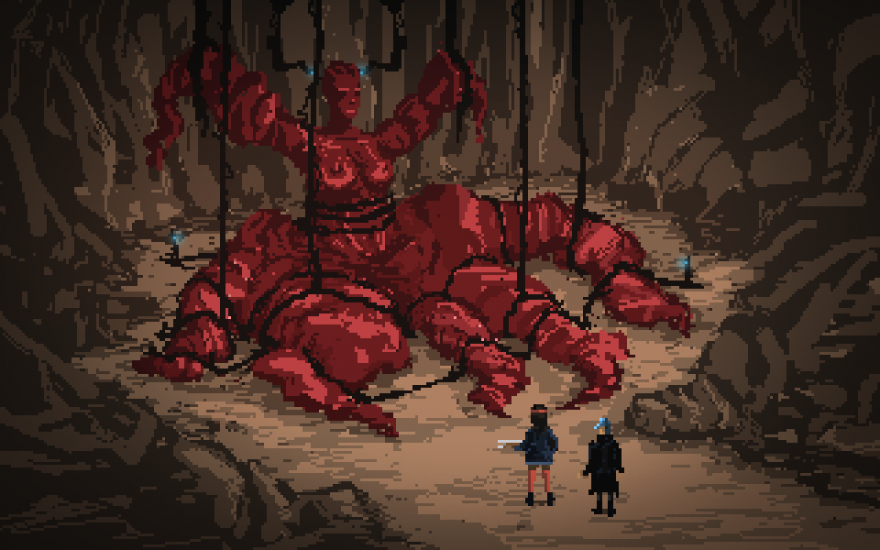 Desert punks in a puke bar. Gore on the cave walls. A giant weeping blood into a lava pit. It can only be… Death Trash!

Death Trash is an upcoming game pitched as a post-apocalyptic RPG mash-up of Planescape: Torment and Ultima 7, with added helpings of sex, cyberpunk, and horror. At first glance, I’m not personally interested in the role-playing elements—what captivates me most is how casually disgusting this world looks.

Sickness and violence seem to be at the heart of this abrasive new society, where sweet-talking, telekinetic punks with shotguns roam and raw, gory meat seems to burst from the earth like a disease. Why, I don’t know. But this will apparently be a normal exchange in your journey:

Skim through some of its screenshots for some similarly profane sights. A giant, red-fleshed blob of a person sprouting sinuous tentacles sits tied up in a cave, evoking images of Akira’s mutated Tetsuo. A mass of swollen, pus-dripping sludge snakes its way up a cave wall, bulging eyeballs of all sizes from its gory pink sinew. Pleasant.

According to its website, Death Trash will feature “rich dialogue,” real-time combat, a stats system, item crafting, and local co-op.