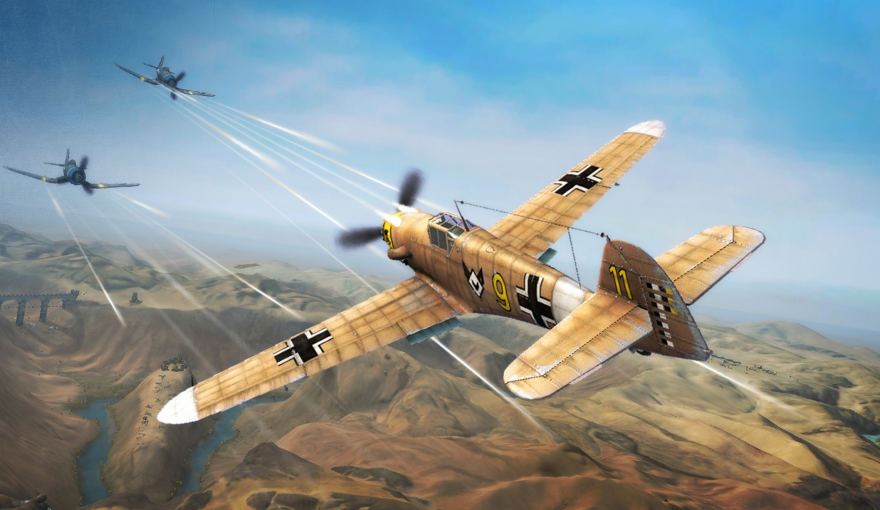 I feel pretty safe in guessing that someone behind World of Warplanes owns a big collection of war-memorabilia. You can just tell these things sometimes, and this game—just like its slightly less silly-named predecessor World of Tanks—has the stench of a collector all over it.

Because sometimes, it cares very much about its historical accuracy. All of the planes (right now the game has 119, ranging from late 20s biplanes to early 50s jets) come with historical background, details on where and how they were built, if they ever flew at all or if this plane was just a failed prototype, production numbers, period-correct emblems and various information on its different engines and guns.

But then, at other times, World of Warplanes doesn’t seem to care about history at all. The game mode where you use these period-accurate warplanes feels like Counter Strike in the sky, a team-based last-man-standing situation in which planes from a bunch of different eras and nations go at it. British fighters helping Nazi attack planes bomb San Francisco? No problem! Just remember the difference between a Messerschmitt Bf 110B and a Messerschmitt Bf 110C-6.

I feel like I have found my granddad’s precious collection of pewter soldiers and brought them to the sandbox, recklessly mixing napoleonic cavalry with roman legionaries and playing at a naive, child-version of war. The planes—hodge-podged together—fly more like toys in a child’s hand than like objects governed by physics. Of course, a child’s hand does fun much better than physics, and doing the movie-thing of nose diving, machine guns roaring, on an unsuspecting opponent feels just as amazing as you would want. Realizing that your nimble plane can turn much quicker than that powerful one that follows you, and starting a crazy chase around river valleys, bridges and canyons feels even better. Like toys, even—fast, fluid and fun; not realistic, just a playful approximation of flight.

The future potential of World of Warplanes outweighs its current reality

And like any good toybox, the future potential of World of Warplanes outweighs its current reality: it will continue to evolve, adding more planes and maps and modes, for the foreseeable future. Eventually, World of Warplanes and its precursor World of Tanks will get a third sibling, World of Warships, and together the three will combine into a single mega-game: the ultimate toybox for randomly assembled armies of historically accurate, circa WWII death-machines. Full of information, devoid of life.

Because Wargaming does not care for humans, it prefers its machines, and since so many games already give us variations on the man-with-gun theme, a blatantly non-human approach feels refreshing, in a way. Perhaps replacing blood with explosions makes this a better way to enjoy war, revel in the machinery and take humans out of the equation—replacing the romance and horror of a Spielberg movie with the obsession and joy of a collector.