The Titan, at the Oak Ridge National Laboratory in Tennessee, is the world’s most powerful supercomputer. It does 17.59 thousand-trillion calculations (petaflops) per second. The 4,300-square-foot monster achieves this insane number of parallel by pairing powerful CPUs with GPUs (graphical processing units):

GPUs have many threads of execution. While each one may run slower than traditional threads, there are simply so many threads that a much higher performance can be achieved, with a minimal increase in power consumption. 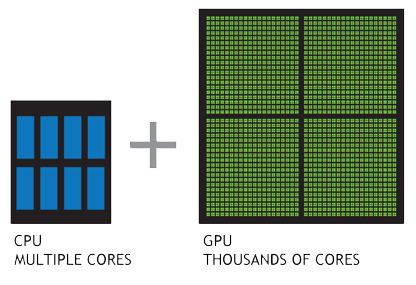 Modern GPUs were introduced by Nvidia in the late 90s as a way of handling the myriad numerous graphical functions necessary to render 3D games; the California company is still the leader in the industry. Titan uses almost 19,000 of the latest and greatest, “Tesla” GPUs. Yes, the computer that will be used to do everything from massive-scale climate simulations to nanoscale modeling of hydrocarbon fuels is based on the same tech that was brought about to play games like Everquest and Counterstrike.

The real question: will it run Crysis 3?