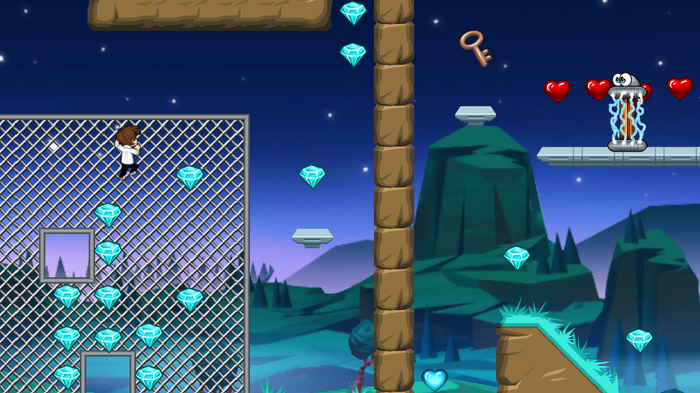 The team behind Worlds of Wander wants to make game design (well, 2D platformer level design) easy, intuitive, and open to all. They also want to give you the spiritual successor to the beloved Commander Keen series in Secret Spaceship Club – that is, they do if you back their Kickstarter campaign.

Headlined by Tom Hall (the creator of the aforementioned Mr. Keen), the project is offering two products – the game, and the editor. While the game looks nice and all, it’s the editor that’s worth getting excited about. Boasting both an “easy mode” where budding designers can click and drag objects around in the 2D interface, and an advanced mode that allows much more control over the toolset – even some light scripting.

Tom is making SECRET SPACESHIP CLUB with this tool and then giving you the game to play, AND all the data to play with! This game will return to the quirky, funny, clever Tom Hall universe in style, and give you lots of concrete, useful data to start with. It’s easy to make a game when you start with one! You never leave the game environment — the editor is built in! Start in easy mode and just mess with something already made for you. It’s that simple!

What’s even more impressive is the array of platforms this will work on – Windows, Mac, iOs, etc.

The whole user generated content paradigm is in an interesting place right now. When LittleBigPlanet came out a few years back, it was hailed as potentially the most exciting thing in all of gaming. Here was a wildly powerful, user-friendly tool to make stages (or even tiny games)– and when Media Molecule actually hired on promising level designers based on their work building community levels (and added several examples to the boxed special edition of the first game), folks went around saying that future level designers would have LBP stages in their portfolios.

It was a very cool system – and a terrific set of tools – that could never quite democratize the experience the way a PC platform could.

In the meantime, a whole slew of new game-making technologies and tools have popped up: the beginner-friendly GameMaker and GameSalad, a number of web developer-friendly HTML5/Javascript engines (like ImpactJS), and the almighty Unity (which the team developed the tool on, by the way) rose to prominence, pushing the DIY movement onto the open waters of the PC.

Onto this stage comes a project like Worlds of Wander, looking to make the design process even more intuitive than a GameMaker-esque program, and adding in pretty art assets, data and pre-built stages.

It does demand a direct comparison to Media Molecule’s work, if only because the draw is precisely the same – you can enjoy the game that comes with it, play community levels, and/or dig in deep and make your own fun. It’s very “play, create, share”, and it may very well work out; thanks to the far more open toolset (and variety of platforms it works on).