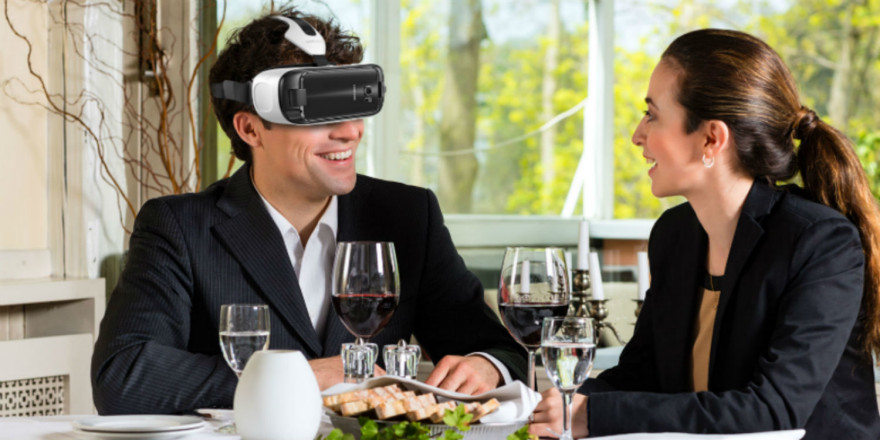 They say we eat first with our eyes, so it was only a matter of time until a restaurant told its patrons to strap on virtual reality headsets and enjoy some retinal feasting.

That scenario is not a joke—well, at least not entirely. “Sublimotion, along with award-winning chef Paco Roncero, recently hosted their second virtual reality event using this technology at the Hard Rock Hotel Ibiza,” Samsung reports. “The concept earned Sublimotion the Best Innovation in F&B award at the Worldwide Hospitality Awards in 2014.” No mention of how the food tasted can be found in Samsung’s statement, though “sensory experience” and “wow factor” feature prominently.

Unless eye contact really isn’t your thing, VR dining is probably not the greatest of first date ideas. Strange events in Ibiza notwithstanding, however, it could still be an interesting idea. Sensory deprivation and overload are, after all, not new ideas in dining. Many cities have dining in the dark restaurants which use the lack of visuals to take taste buds by surprise. Again, insofar as we eat first with our eyes, total darkness can be the best way to catch diners off guard. This is a novelty experience, sure, but a culinary experience nonetheless.


VR dining, however, would more closely resemble a course British chef Heston Blumenthal served at his flagship restaurant, The Fat Duck. “Sound of the Sea,” a seafood dish presented in a manner that resembled waves lapping up against the shores of a beach, comes with an iPod hidden in a seashell. Diners put the ear buds in their ears and listen to the waves. The audio was meant to heighten the sensory experience, and it worked well enough for The Fat Duck to be named Best Restaurant in the World in 2005.


This same sort of sensory overload is what VR could conceivably provide to diners. You can see the scene your food is supposed to evoke while eating. Of course, you can’t see what you’re eating with a VR headset on so things might get messy. Indeed, that is the main difference between “Sound of the Sea” and VR dining; whereas the former only added to your sensory experience, VR cancels out everything you’d normally see in order to show its own world. That world may be great, but it comes at a cost. Hopefully that cost does not include VR sickness.