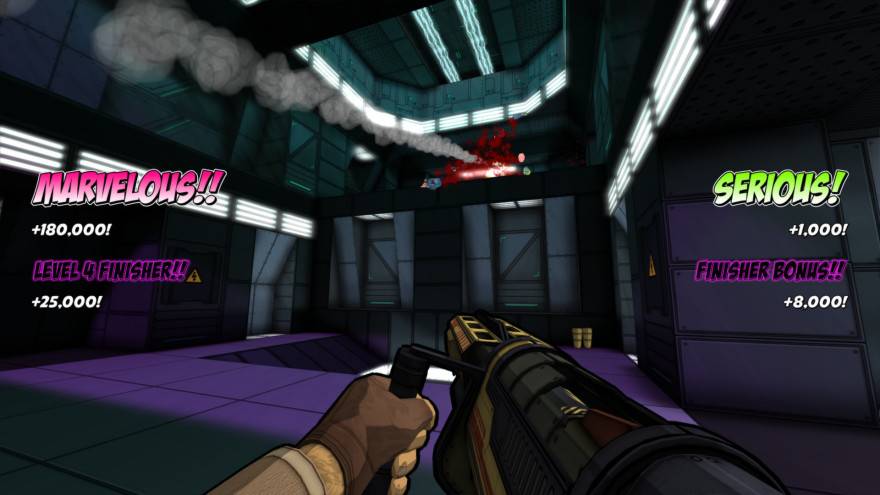 If you press the Tab key and type “IDDT” twice while playing the 1993 first-person shooter Doom, do you know what happens? You enable Doom to be played from its overhead geometric map. It looks like Geometry Wars without the explosive colors. All of the Giger-esque biomechanical textures and the dim flickering lights, all of that in-your-face horror: gone, stripped back to its core. What you see is Doom at its most naked; all straight lines, hexagonal rooms, and moving triangles.

You shouldn’t play Doom in this way, as that misses the entire point of Doom, but it goes some way to proving that its design is almost identical to the popular top-down shooters that preceded it. It makes sense considering that this is the established blueprint of the genre that id Software had to work from as a base when almost single-handedly consolidating what the first-person shooter would be.

you have to keep moving and shooting, always.

This is why Doomguy, as he’s known, doesn’t move like a human as we’re used to in shooters now; he travels at a million miles per hour—he’s a 2D spaceship. He doesn’t have a recharging shield (as in Halo), he doesn’t lock-on to cover, and so his best defense is his maneuverability, just as in Robotron and Tempest. In accordance with this, most enemies in Doom don’t fire instant-hit projectiles, instead, the fiery orbs and rockets move slowly towards you so that they can be dodged. It’s a game of speed and flow, in which the worst situation arises when you slow down or stop altogether—you have to keep moving and shooting, always.

Id Software would go on to perfect this formula with its Quake series throughout the rest of the 1990s, and then something strange happened to first-person shooters. In 1999, Dreamworks Interactive released Medal of Honor, a slow and tense World War II era first-person shooter. As you played a soldier of the (Office of Strategic Services), Medal of Honor emphasized the use of false papers, silenced pistols, and espionage to proceed.

It proved very popular, earning it sequels that steadily moved towards louder experiences at the frontlines of war. By 2003, Medal of Honor even had a competing franchise in Infinity Ward’s Call of Duty, the two series battling to be the top-seller with more violence, more scenic scripted sequences, and supposedly increasingly realistic campaigns.

Gone were the maze-like level designs and the projectile dodging of the early first-person shooters. Gone was the brighter colored palette of sci-fi and the varied bestiary of gross aliens and demons. Sure, communities of PC players still rallied around online twitch shooters such as Unreal Tournament and Quake : Arena (and still do today), and Counter Strike never really died down, but the focus of the single player experience in first-person shooters seemed to converge into the same corridor of military man-shooters during the first decade of the new millennium.

We’re almost halfway through the next decade now and there are signs that this trend is easing down. Then again, maybe I’m repeating what was said in 2011 when Flying Wild Hog released its electric blue, back-pedalling robot shooter Hard Reset. And, obviously, any theorizing is spitting into the gale that is Call of Duty, which still seems to be bigger than ever. But, if you look off to the sides, there are old-school arcade shooters such as Reflex that have people excited, and the one I’ve been playing, Wrack, is demonstrably glorious.

connect spaces through the art of high-speed murders

The first thing you should know about Wrack is that it is the six year project of Brad Carney; he who created Skulltag, which is a multiplayer source port of Doom and Doom II that modernized the decades-old games so that they could be played on modern hardware. Through Carney, Wrack has a physical connection to Doom, to the Ghost of First-Person Shooter Past, and that shines through in a number of its features: the slow-moving projectiles, the orthogonal labyrinthine levels, the satisfying bite of the shotgun. If you could type “IDDT” twice into Wrack and bring up a barebones overhead map of its levels, it, too, would be synonymous with a 2D top-down shooter.

That’s not enough. I played Wrack a year ago and found that it lacked any of the spirit of twitch shooters at first. It felt like it was a degenerate offspring that had only read the first couple of pages of a book about its ancestors, and couldn’t be bothered to read the rest. Its spaces felt flat and empty, the environments wholly uninspired, and the enemies existed only to jog casually and shoot occasionally. It turned out that I was playing it wrong.

Wrack needs to be played at high-speed so you don’t have the time to look for detail or textural depth, which is an activity most modern shooters half encourage. You should be in a frenzy, only having momentary glances to see formations of enemies as shapes to be shot, bouncing off the walls while straferunning in beelines to collect armor and ammo. It’s a game for speedrunning but, unfortunately, it didn’t give enough direction to play it in this way—perhaps my muscle memory had also dullened and needed a kick.

Carney took note of my observation back then and has since carved out a new niche for Wrack for it to make a nest in. The most defining of these changes are the combos and chain kills that you can perform and blast off, respectively. Shoot enough enemies in quick succession, flying through the levels to connect spaces through the art of high-speed murders, and you build up a combo. Doing this gives you two choices: you can either let the score mount up and perhaps get an extra life, or you can turn that combo into a chain kill and send out a deafening blast from your gun that knows only massacre.

In other words, Wrack now rewards you for blazing pace and efficient killing. That’s all it needed. It incites you to reach a refined degree of skill that only comes with lots of practice, to build up to moments of pure flow when the combo counter has reached its highest pitch, and begs for you to unleash a demonic spray from your shotgun to kill an entire sprawling room of beasts.

Wrack‘s chain-killing system invites you to figure out and perfect the quickest and deadliest acrobatic route through each level, annihilating time and scores. It’s the multi-button combos that win matches in fighting games re-imagined for the first-person shooter. All of Wrack‘s similarities to Quake were blemishes until they were aligned under this time-attacking, head-spinning combo system. Carney has, after six years of fumbling, found a way to make the first-person twitch shooter feel as alive as it did back in the early 1990s. Maybe, just maybe, it will inspire others to do the same.

You can purchase Wrack on its official website and on Steam.