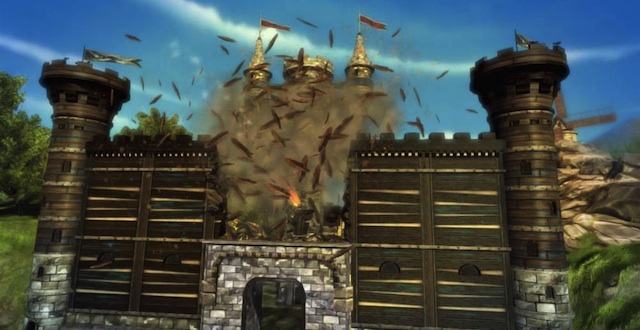 Destruction is in our DNA. Maybe that’s because all of us are doomed to erode, the foregone conclusion to a life of building ourselves up, only to inevitably, irretrievably, fall down.

Kidding! It’s fun, is all. You build the pillow fort so as to knock it over. You rake leaves into piles only to jump into them, scattering your hard work. We’re hardwired to destroy what we create. (See: Pete Townshend’s Stratocaster, the USA’s 60-percent divorce rate, the 1998 Florida Marlins, etc.)

No game from my youth captured this feeling better than the boardgame Crossbows & Catapults, originally released in 1983 and created by the prolific French designer Henri Sala. I came across it maybe five years later, in elementary school and happy to play with toys while crouched on the carpet. Each player constructs a miniature medieval city of plastic bricks. You place your plastic flag atop your plastic tower, which is manned by plastic people and defended with the titular plastic weaponry. Each side has a collection of plastic discs—read: boulders and/or cannonballs—which you then fling back and forth in a calculated effort at amassing big-time wreckage. There’s an official set of rules to play; as is often the case in war and love, I’m pretty sure we ignored those and blasted each others’ structures until all that remained were ruins.

And so when Microsoft announced Iron Galaxy’s Wreckateer as one of its “Summer of Arcade” downloadable games for Xbox 360, a small part of my stomach flipped in delight. While everyone else called it a “3D Angry Birds,” I knew what it really was: a virtual Crossbows & Catapults.

Except that it’s much more similar to Angry Birds. You use Microsoft’s Kinect to mime the loading and launching of ballistae, flinging projectiles toward a succession of castles overrun with annoying goblins, trying to crush as much as you can. Wreckateer has two major differences from Angry Birds: 1) It takes place in 3D space, and 2) it uses motion control.

Our movement through the world is much more Stumble-and-Grope than it is Calculated Perfection.

Something about games with 3D environments still hinders the inexperienced player. Which is odd, since we live in a world comprising, last I checked, all three dimensions, and most of us have little problem walking through a tight hallway. Place a controller in the hands of someone who doesn’t normally play games, though, turn on the latest Call of Duty, and watch them perform a series of ground-staring, wall-bumping stumbles.

There’s a reason New Super Mario Bros. Wii, a 2D platformer, sold more copies in two months than its 3D predecessor Super Mario Galaxy did in two years. Flatness flowing left-to-right is easy: the movement of reading, the language of charts. It is how we simplify the most complex of processes, from evolution to chronology. It is why Angry Birds has been downloaded over 100 million times, and why Wreckateer won’t be. X and Y make sense; add that finicky Z axis, and whoa Nelly, where are we again?

This is why the advent of motion control, and of technologies like Kinect, is so important. Our columnist Abe Stein wrote about sports games and the paradoxical benefit of simplifying complex movements into button presses. And while I agree to an extent, I also think there’s much to be gained by allowing true, kinetic energy back into play.

In traditionally controlled games, a swiveled stick and tapped button are capable ciphers, easy to execute and symbolic of athletic prowess. But, for the player at home, there is very little physicality. It’s all in your mind. Motion control, when successfully employed in games, returns intuitive sensation to your body. In Wreckateer, you pull back the crossbow by pulling, not tapping. You add english to the flying boulder not by nudging a pad in your hands, but by pushing your hands themselves.

Further, most real-world action cannot be directed as gracefully as a series of button presses. Take a rubber band in your hand and fling it across the room. Did it go exactly where you expected? Probably not. Not to the degree that a game player, fine-tuning the aim, angle, and velocity with a DualShock, could have predicted. And so we have our games cheat for us, giving us unrealistic expectations of control, because they are games and an explicit connection to reality and its physics-based rules is not always what we sign up for. Motion control allows chaos back in. Our motor skills are finite, often dubious. Our movement through the world is much more Stumble-and-Grope than it is Calculated Perfection. Our games should, at least sometimes, reflect that. In this regard, Wreckateer succeeds in aping our own imperfect flailings.

Games often ask us to destroy our surroundings—even when they don’t, we do anyway, in games from SimCity to 2008’s Boom Blox. Wreckateer tries for this universal sense of glee but, like a styrofoam cannonball, flies low and falls short.

You proceed through a sequence of castles. It’s your job to destroy them, for some reason; your two helpers, both medieval caricatures (one of which is named Wreck Wreckington—this is the level of nuance on display here), never fully explain. This is no experiment in ludonarrative dissonance—the castles exist to blow up, the end.

A computer-controlled minion loads up the ballista with one of a half-dozen projectiles. You, in your living room, step forward and bring your hands together—your onscreen avatar successfully mimics your behavior and grabs onto the machine. Step back and lean down, and now you’re pulling the crossbow backwards. The Kinect follows your movement with impressive precision, enough so that slight inch-by-inch shifts affect your aim and velocity. Pull your hands apart and your avatar does the same, releasing the flying shell into the air.

As the rock floats in slow motion towards its target, you affect its trajectory in various ways. Some rocks can be swatted up/down/left/right, as if pushing them with phantom hands. Others split apart into four smaller rocks held together by psychic energy. Another sprouts wings and flies—thrust your arms out in a Y-shape and manually pilot the rock into the tower’s base, soaring through floating icons on the way boosting your score or speed.

For a game about flying balls of destruction, everything moves slowly—a curious but effective choice, reminding me of a kid holding a balled-up sock in their hand, pushing it through the air, and making “whoosh!” noises, approximating a great meteor about to land on the earth/carpet below.

The textured wall of stone is immediately replaced with a shower of toothpicks and crushed Oreo.

But perhaps more fun than colliding into towers of stone is missing them altogether. In a way, Wreckateer turns into an airborne sandbox (sandstorm?), where the fun arises from finding out what you can and cannot do: grazing roofs; flying around corners; aiming high in the air only to land a foot away; spooking goblins sailing around in hot-air balloons; crashing through doorways, hitting nothing at all.

Perhaps such passivity feels satisfying because the actual destruction lacks a certain panache. The destructible environments show off some shoddy physics and weak effects, a problem when the entire premise of your game is to destroy the environment. I’m reminded of certain highlights from my middle-school filmography, when I used a VHS camcorder to render such incredible effects as the “Disappearing Apprentice,” whereby a magician friend pointed his finger at his little sister, I hit the REC button to stop filming, my friend’s sister moved out of the frame, and we placed a liter of 7UP in her spot and continued filming, thereby zapping our poor apprentice into a lukewarm bottle of carbonated soda.

When a flying boulder crashes into a tower in Wreckateer, the resulting explosion reminds me of that cheap magic—the textured wall of stone is immediately replaced with a shower of toothpicks and crushed Oreo.

In another odd choice, due to low budget or a design team high on something, every moment of impact is celebrated with miniature firework displays, not overhead in the sky as if to celebrate all this magnificent wrecking, but over the damage itself, like haphazardly tossed sprinkles.

Why am I bothered by insufficient window dressing? The game itself is fun; the mechanics are addictive and work quite nicely, with Kinect’s all-seeing-eye noting your hand movement and gestures well enough for such simple demands. What it fails to do is improve upon the gold standard: my nearly-10-year-old’s brain computer, processing outrageous scenarios and fantastical explosions with every pulled rubber band and plunked-over chunk of plastic.

Wreckateer wasn’t built for me, though. It was built for today’s nearly-10-year-olds, born in the Angry Birds age, who just might have a hoot blasting virtual boulders into digital walls. And if not, there’s always the carpeting, some socks, and a few piled-high toys.