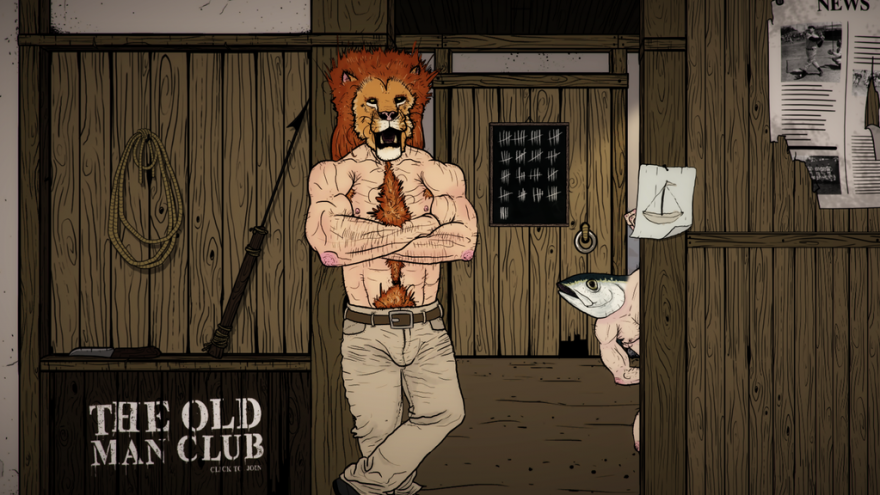 If you’ve never read Ernest Hemingway’s 1952 novel The Old Man and the Sea there is now an abridged version in which you arm wrestle a marlin. It’s a videogame with the superb title of The Old Man Club, which not only refers back to the novel’s title, but may also allude to a critique of those who have interpreted Hemingway’s writing as expressing a supreme form of manliness.

embody everything that is considered to be traditionally masculine

In The Old Man and the Sea, the masculine reading is found by those who seek it in the struggle of an aged man, who wrestles for three days with a large marlin on the end of his fishing rod. He’s determined not to let go as prior to this the old man experienced an 84-day streak of foul luck that saw him unable to catch a single fish. Upon eventually catching his aquatic adversary, the old man has to then bat off sharks that eat the majority of his catch while heading back to the dock many miles away.

All of these events are turned into arm wrestling matches in The Old Man Club. At first, the club’s interior appears to house only a lion-headed bloke (referring to the old man’s dream of his African childhood in the novel) and a salmon-headed fella who are both up for some elbow-to-elbow ruffian action. Below the neck, they are each distinctively hardbodied: thick forearms, chiseled all-over, streaks of body hair from chin to dick. They embody every shallow trait of what is considered to be traditional manliness and you must beat them in a competition of strength, will, and determination.

Slam the back of their fists against the wood of the table for victory and the panels in the club will start to disappear, revealing more opponents for you to take on: a muscled dolphin, a couple of shark bros, and of course, a hulking marlin. You win each arm wrestle by clicking a button on the screen as frequently as possible. It’s a proper test of endurance and grit that appropriately tests your physical capability.

This performance of bravura is what Thomas F. Strychacz sees in many of Hemingway’s novels and that he confirms many have used “to consolidate a philosophy of masculinist modernism,” as he writes in his book Hemingway’s Theaters of Masculinity. The idea here being that manhood is primarily gained through acts of violence. We see this in The Old Man and the Sea and especially in the ceremonious bullfighting in Hemingway’s earlier novel Death in the Afternoon. Those who subscribe to the supposed “philosophy of Manhood,” as coined by Joseph Waldmeir in his praise-heavy essay on Hemingway, would also trace similarities in more modern texts such as Fight Club.

anyone needing to prove their manhood is an unnecessary pastime

The problem with worshiping this idea of masculinity is that it makes manhood unattainable to many and champions the most boorish traits known to, well, man. And this idea of gating manhood has hardly been left in the past either, as it still thrives to this day, especially with the prominent “bro” and “lad” cultures, encouraging goofish acts of prickishness to others mixed with an unhealthy dose of self-harm masked as a good time that often involves downing excessive amounts of alcohol (and often other drugs) to prove oneself as part of the group.

The Old Man Club doesn’t necessarily have a view either way on all the masculinity its transferred from word to sketched graphics. But interpretation of it, as with the novel that it’s based on, is entirely equivocal. That said, surely we can accept that anyone needing to prove their manhood is an unnecessary pastime and, if it were to be entertained as a viable idea, then it must constitute more than raw knuckle-headed strength, right?

You can download The Old Man Club at pay-what-you-want price on itch.io.