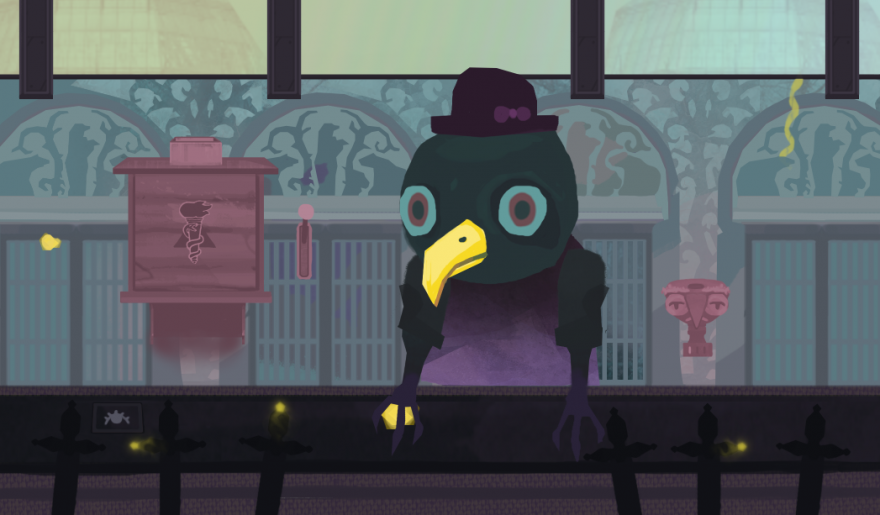 In 2014, German game maker Konstantin Kopka released a small game about “looking beneath the surface of serious medical conditions” called Wunderheilung. It had you diagnosing both a bird-person and a strange gentleman with a magnifying glass, searching for the symptoms of their maladies, and then curing them with your cursor. What stuck out about the game is how it used a mundane job to offer a window into its bizarre world.

Made in only 48 hours, the slew of positive attention that Wunderheilung managed to attract took Kopka by surprise, and it encouraged him to turn it into a bigger project. Now he’s working on Wunderdoktor, which is essentially the same game expanded with more patients, illnesses, and a proper narrative to unfold as you dish out cures. Having teamed up with his illustrator and animator sister Elenor Kopka to form the studio Ghostbutter, Kopka’s current aim is to make an experience that’ll last between two to four hours with some hidden content to find that can potentially lengthen the playtime.

a coal-mining dog with a case of “Arachnocough”

Kopka describes Wunderdoktor as a “mix between frantic Wario Ware minigames, a road movie (riding a train), and a Tom Waits song.” You play as a doctor who is assigned to a train that is mysteriously full of ill people. You’ll steadily see to each passenger, looking to cure their illness against the time limit, and hoping not to accidentally kill them in the process, which will “have grave consequences.” The wider story involves trying to find out why you’re on this train in the first place and why all these ill people are on board.

While working on the game, Kopka has been able to draw inspiration from his experience working in a hospital, as well as stint as a painter who studied traditional painting and drawing. “I find the topic of quackery, unusual diseases and the history of medicine in general super fascinating and that has been driving the development of Wunderdoktor so far,” Kopka told me, “although I guess I’m taking some liberties on what actually constitutes an illness the more you progress in the game.”

The illnesses shown off so far on the game’s development blog include an eel living inside a shark’s body, a coal-mining dog with a case of “Arachnocough” (coughing up spiders), and face shrinkage. As with the original prototype, you’ll also be popping pimples and detecting diseases, as well as cleaning skin and slicing flesh with scalpels. It’s often gross and morbid but the scrappy crayon-like art makes it delightfully lighthearted in spite of this. “My goal is to make something genuinely fun that feels almost arcadey but on the other hand also really weird and kind of grim and also to tell a story of transition and soul-finding in between the patients’ encounters,” Kopka said.

You can follow the development of Wunderdoktor on Ghostbutter’s blog.