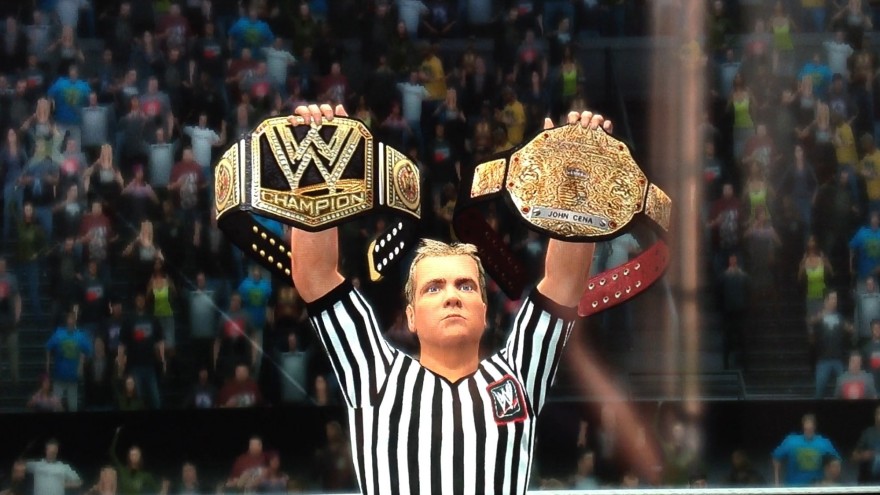 Wrestling is not a sport. We know this. Or, rather, wrestling is a sport—a sport governed by hundreds of arcane rules and practised by young men in singlets and protective headgear, who roll around rubber-stinking mats in high school gyms. That sport has its transcendent moments, mostly involving the Olympics, and it involves feats of skill and strength and control and conditioning and strategy that most of us will never understand, let alone master. One of the assistant coaches in my local Division I collegiate wrestling program lives in my neighborhood, and his daughter is about the same age as my daughter. He has two cauliflower ears, and he and I talk about rap music sometimes when those daughters are at the playground together. I like him a lot, and I have vast respect for what he does. I would not, however, play a videogame based on his sport, and you probably wouldn’t, either.

Wrestling gave up even the flimsiest of pretenses to athletic legitimacy.

Let me start over. Professional wrestling, as we’ve come to know it, is not a sport, even if it also involves feats of strength and skill and etc. that boggle the mind. It’s a stage show, a carny ruse, a bajillion-dollar entertainment enterprise, a ferociously American form of art, and a tremendous source of personal gratification, even if I’m usually embarrassed to tell other adults how much I love the shit. Decades ago, wrestling gave up even the flimsiest of pretenses to athletic legitimacy, and now even the smallest children generally now know that they’re cheering and booing characters, office-crafted personas and the actors portraying them, not real-life competitors. Wrestling has rules, but those rules are dramatic conventions, and they exist to be flouted or worked around or entirely negated based on whatever new match stipulation Vince McMahon and his lieutenants can think up. It’s a sport the same way the Buddy Holly stage musical is a rock show: It’s pretending to be one, and it isn’t pretending very hard.

And yet—wrestling now has 2K status. Like basketball and baseball and hockey before it, pro wrestling now has its own 2K Sports game franchise. It has the franchise because the 2K Sports people took over from the bankrupt THQ. And let’s take a quick moment for THQ, the company responsible for a late-90s/early-00s Nintendo 64 run of wrestling videogames that mark the art form’s pinnacle. In those games—WCW Vs. NWO Revenge, Road To Wrestlemania, No Mercy—the wrestler avatars looked and moved like the wrestlers they imitated, and the in-ring mechanics followed algorithms that nicely replicated the established reality of actual pro wrestling matches: If you spent the whole match wrenching or stomping someone’s arm, for instance, they’d eventually have a whole lot more trouble lifting you. The recent THQ wrestling games didn’t have the elegant simplicity of those earlier games, but they were a lot of fun, and it was still a nice little nostalgic rush seeing their logo come up when I’d turn my Xbox on. Now, that logo has been replaced with the one I’d see before endless afternoons spent trying to get my season-mode Wizards off the ground.

Of course, if you play NBA games, even the ones that have legendary team-rosters in there as bonuses, the game does not expect you to reenact classic games. There’s no moment where you have to replicate Larry Bird’s steal of Isiah Thomas’s inbounds pass in that 1997 game, or where you have to get through a playoff game as Flu Mode Michael Jordan. There’s no moment where you’re playing as Robert Horry and you have to press X to forearm-smash Steve Nash into the scorer’s table. That’d be weird. But that’s one of WWE 2K14‘s prime selling points.

It allows for some serious wallow-in-nostalgia moments.

This edition of the game is built around Wrestlemania—the entire 27-year history of the WWE’s biggest annual event, and the big matches that have come to define each of the individual events. There’s been some great behind-the-scenes-likeness rights negotiating, which means that Hulk Hogan and the Ultimate Warrior and various other no-longer-contracted types are in the game. And the designers have taken care to recreate the stadiums and entrances of the wrestlers and the looks of the stadium and even the closed-circuit-TV fuzz of the early Manias. All this looks great and allows for some serious wallow-in-nostalgia moments for aging fans like your boy right here.

But you don’t just replay those old matches; you recreate the big moments as accurately as you can. If you’re Razor Ramon and you’re taking on Shawn Michael in the Wrestlemania X ladder match, you don’t just have to win the match; you have to set the ladder up in the corner and whip Michael into it and then win the match. If you’re Ricky “The Dragon” Steamboat and you’re fighting “Macho Man” Randy Savage at Wrestlemania III, you can’t just win the match with your flying cross body block finisher; you have to win it with a rollup, the way Steamboat did at the actual show. This leads to some deeply irritating sequences (“gah fuck wait how do I steal opponent’s finisher again?”), and there’s a strange Civil-War-reenactor quality to the entire idea of it, but the end result is profoundly satisfying.

Compared to last year’s edition, the game is full of fresh and fun and talented present-day wrestlers—the Shield, Antonio Cesaro, Tensai. The gameplay is essentially the same as it was in the THQ games, albeit a bit smoother and faster, with some more creative counters. There are some fun wrestling-dork options in there, too, like the option to play in the NXT Arena. But the real reason to stick with it is that strange rush you get, that combination of nostalgia and accomplishment, when you successfully get your onscreen character to do the same thing as a real wrestler once did, years ago. Doesn’t matter if it’s a sport or if it’s real: It’s occurring right there on your screen, which is exactly where it belongs.