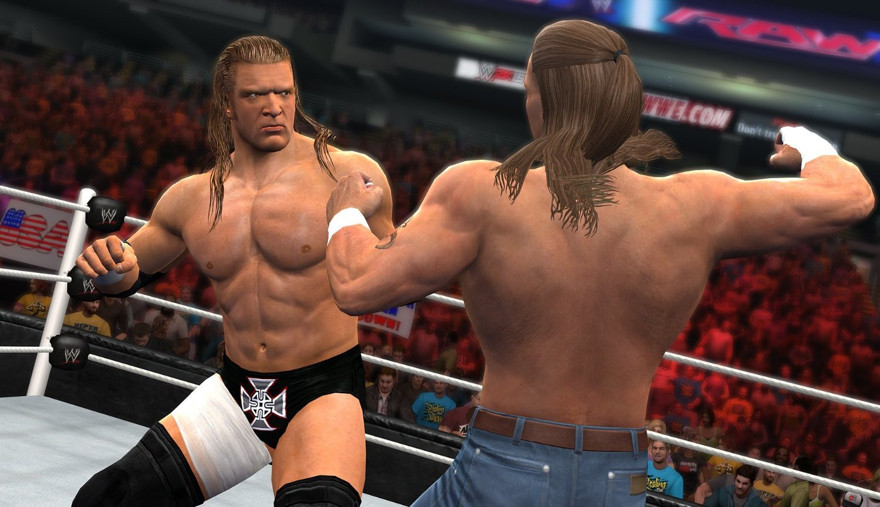 On the surface, sports entertainment (or professional wrestling) is all about pomp and circumstance. It’s about outsized personalities, amplified emotions, and a strict adherence to black and white morality. Shades of gray certainly exist in the storytelling; bad guys (or heels) can be fighting for something worthwhile, and good guys (or faces) can do bad things. Stone Cold Steve Austin, throughout the ‘90s, was the embodiment of the face doing heel-ish things. Underneath that surface of heroes and baddies though is a business, and, by all accounts, a particularly ruthless one at that. There’s the stiff competition—the WWE is really the only significant sports entertainment show, and there’s only so many spots available on the roster. There’s the lack of a union, and the toll performing takes on the body of every wrestler. There’s the time commitment and the travel, with wrestlers often on the road for more than 300 days a year. Wrestling is a job, and WWE 2k15 acknowledges that more than any other wrestling game has in the past. Whether or not that makes for a compelling videogame is up for debate.

The most obvious example of WWE 2k15 treating wrestling like a job comes in the form of its newest feature, the MyCareer Mode. Familiar to anyone who has played a 2k sports game in the last few years, the mode lets you create a wrestler and bring him up through the WWE ranks. You train in the Performance Center, wrestle on NXT (the WWE’s version of the minor leagues), then hope to get called up to the main roster, where you compete on shows like Smackdown, Raw, and eventually pay-per-views. Training your wrestler is a lot of work. I spent about 8 in the gym before I was called up to even the most mediocre of WWE shows (WWE Superstars—not even Main Event!), wrestling in a few boring Performance Center matches, where trainer Bill DeMott yells stale, repetitive lines at you about how your job is in jeopardy.

The attention to narrative detail here never really finds a balance between crafting a compelling verisimilitude and being overbearingly dull. The inclusion of “chain wrestling,” a kind of mini-game that comes at the beginning of just about every match, is meant to add to the verisimilitude, as is the new pace of the matches. No longer does your critical-condition wrestler lie on the ground like he’s dead after a finisher, only to pop up again, completely refreshed, once an allotted amount of time has passed. Instead, there’s a revelatory feel here that’s essential to building tension in a wrestling match. Watching your exhausted wrestler slowly getting up, pulling at the ropes for support, while your opponent stalks you with his finishing move locked and loaded, adds significant stakes to the matches like no wrestling videogame before it. Getting to that moment, though, is a sluggish process.

Not everything in WWE 2k15 is so tedious. The 2k Showcase mode, where you play through rivalries between CM Punk and John Cena, and Triple H and Shawn Michaels, manages to capture the intensity and believability that can come with good wrestling storytelling. The best wrestling storytelling, whether in the ring or through promos, makes you forget that you’re essentially watching a stage play. The 2k Showcase mode does just that. It’s one of the few instances where the storylines, perhaps because of their familiarity to wresting fans, feel consequential. Even the MyCareer mode, with its backstage interactions and illusion of narrative choice, can’t muster up much in the way of meaningful conflict.

It’s fitting though that much of the game, outside of the Showcase mode, is tedious. I imagine that dullness and repetition is part of what it means to be a real life, successful WWE superstar. In representing that, WWE 2k15 is remarkable. If you want to be a superstar like John Cena or the Undertaker, you better be prepared to go out to the ring every night and perform the same moves, and say the same catchphrases, then hop on a bus, go to the gym, sleep, then do it all again tomorrow. Sure, you might get your Wrestlemania moment one day, but will it really be worth all the blood, sweat, concussion symptoms, and hours that you’ve put into getting there? For a videogame based on grown men and women in spandex fighting each other while forwarding overblown soap opera storylines, WWE 2k15 is surprisingly misanthropic. The game seeks to be a “realistic” portrayal of the WWE career arc, asking you to grind your way from an unknown to a Superstar, and finally winning the WWE Championship. WWE 2k15 certainly propagates that fantasy, but along the way, it also stumbles into a repetitive pattern that, completely by accident, reveals a harsher and poignant truth about what professional wrestling, and being a sports entertainment performer, really is: it’s a job, just like any other job.