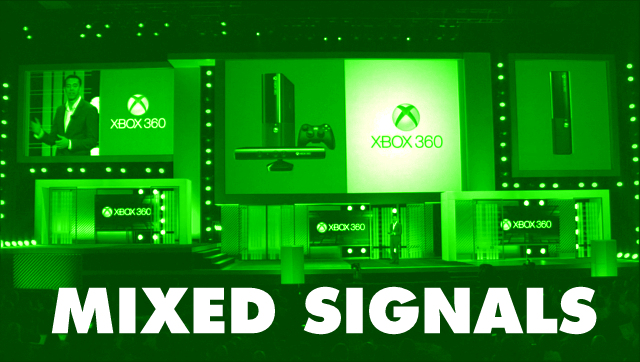 A couple weeks, as you may know, I was quite excited about the prospects of Microsoft’s new entertainment device Xbox One. Their live-streamed event was a deliberate hodge-podge of prognostication on the future of television, partnerships with Steven Spielberg and the NFL, and, well, digital attack dogs.

For those who want the tl;dr version, my initial assessment of Microsoft’s strategy was simple. The Xbox One was a device targeting everyone, not just gamers. It was the realization of the original dream that Bill Gates had presented with the original Xbox and eerily similar to the all-purpose device Steve Jobs dreamed of shortly before his death. I was cheerfully optimistic that this had potential for becoming a living room that would attract people like my girlfriend to the strange and beautiful world of videogames.

But something curious happened today. At E3, on USC’s campus, Microsoft held a nearly two-hour press conference for gaggles of media and on-lookers. (Also, as an aside, who cheers at press conferences?) These are yearly displays for big publishers and the first of four that would happen today. One would think for a box that’s so positioned to pull everyone under one roof, it would at least reflect that ethos during its games presentation.

But that was not the case. New titles like hyperbole-prone Hideo Kojima’s newest Metal Gear title The Phantom Pain featured the wry voicework of Kiefer Sutherland and a child named Eli who apparently “curses his own fate.” There was a bombastically cartoonish new shooter from Insomnia titled Sunset Overdrive and Sam Lake, the mind behind Max Payne, explained how his new outing Quantum Break blurred the line between television and games. Generally pretty exciting stuff if you like to hold a gun, but not really the sort of spread that you would expect from a device aimed at courting a wider audience.

This, of course, is not unusual. At Sony’s big press event for the PlayStation 4, the line-up was quite similar, with the exception of a brief diversion for some of the independent titles Sony has been cultivating over the last year. But titles such as surveillance-hacking thriller Watch Dogs and the Ellen Page vehicle Beyond: Two Souls rounded out an otherwise expected outing from the Japanese electronics giant.

Frankly, Sony’s event bristled with energy. By placing games at the center, the presentation felt focused and spirited. Unlike Sony, however, who has defiantly claimed the mantle as the “gamer’s box,” Microsoft’s display at E3 was, well, confusing.

Social psychologists might call it cognitive dissonance. Leon Festinger coined the term in 1956: when our expectations fail to meet reality, we freak out and try to push things back into order. Such a theory might explain why Microsoft overweighted heavily male, violent core titles—this was a love letter to the jilted gamers who complained a couple weeks ago.

But the more troubling piece came at the close of press conference. Microsoft Studios head Phil Spencer took the stage to close the day and announced the date of release for November. Then in an epitome of anticlimax, he quickly chimed  that Xbox One would be $499.

Let’s be clear. This not a surprise. It’s only 30 bucks higher on an inflation-adjusted basis than the Xbox 360 launch price and the price will surely come down each year. It’s completely in line with other consumer devices, like an iPad.

But for those looking for a reason to add an Xbox One to their living room set up, the cost sends a clear message—you should know what you’re doing. Not only will this price ultimately be $100 dollars more expensive than the PlayStation 4, but it seems directly contrary to the more open message the company had sent the public. Features like group-calling on Skype and fantasy football integration are fantastic onboarding tools for the uninitiated, but at nearly $500, such a proposition pales in comparison to an iPad or new mobile phone. The reality is that Microsoft by aiming their sights elsewhere now must face a different sort of competition—consumer electronics.

It is then, no surprise, that Apple was right there alongside Microsoft, announcing new hardware and software features at WWDC within hours of Xbox One’s big day. There was a new mobile OS roll-out, a complete design overhaul, and the buried news that controllers would now be supported.

Apple has a long history of making their products reach, not only their core consumers, but moms, educators, design nerds, and, well, the rest of us. If Microsoft hopes to carry the banner of “liberté, égalité, fraternité,” they’d best find that flag.