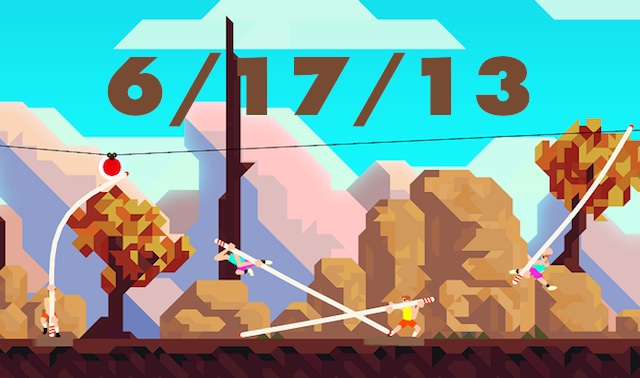 Pole Riders, the fiercely-competitive, super-simple, mega-fun, zany “sports” game, is coming to PSN as Super Pole Riders in the Sportsfriends bundle. What makes it so super? It’s up to four player, so it will have twice the chaotic energy of the pole-vaulting original. Cannot wait!

The up-side to getting stuck on Antichamber’s rather daunting puzzles was the hum and drift of its ambient score. You can now get drenched in its sound waves here.

If you haven’t already read Tom Bissell criticism on The Last of Us, which calls into question how these high-budgeted single-player games can be masterpieces and yet so incorrigibly tactless, you probably should.

Wow, Snake can truly be played on anything, even a solid oak nightstand.

We know which games we will be playing when the Xbox One arrives this fall. Still unconfirmed if PRISM comes preinstalled.

Also, a couple of thoughtful video game articles were among the floatsam we found on Longreads. First, there’s the breakup story of Activision and Call of Duty creators Vincent Zampella and Jason West (whose upcoming shooter Titanfall has giant mechs and looks none-to-shabby.)

At the other end of the spectrum, check out this memoir of a college student from genocidal Burundi who was frightened and baffled by American youths fascination with big guns in violent videogames.