We keep trying to answer the question of what a game is with finality. Journalists, academics, and YouTube commenters have all weighed in on the subject with varying degrees of cocksureness and vitriol. “All games have X; no games have Y.” This debate got old fast. It has felt, as it keeps circling back into prominence, a bit like “Are Games Art?: Die Harder.” But in 2014, the games themselves started to strike back. Mountain. Goat Simulator. And Rock Simulator, gaming’s analogue to that Kickstarted potato salad.

What defines these anti-games as a subgenre is that they’re implicitly rather than explicitly goal-oriented. That means that the onus is on you, the player, to find good ways to spend your time in these games. Traditional games give you goals and achievements and ways to win. Anti-games suggest, they afford opportunities, but they never demand. You can’t fail an anti-game, but you can fail yourself in it.

You can’t fail an anti-game, but you can fail yourself in it.

That openness makes anti-games really hard to assess on their own terms. When they don’t claim themselves as serious or silly, it becomes almost impossible to know whether they’re highbrow pastiches of videogames, or lowbrow, anything-goes sandboxes. In fact, I’d argue that we can’t even map this highbrow/lowbrow binary onto anti-games. Anti-games are nobrow. As Peter Swirski puts it in one of several definitions he offers in From Lowbrow to Nobrow, nobrow art is “a half-nostalgic, half-ironic farewell” to everything that preceded it.

Take Mountain, for example. After creating the world with a few doodles, the game tells you: “You are Mountain. You are God. Please enjoy your time here.” That’s it. That’s what you do. You are Mountain. You are God. Go on, then. Zoom in, zoom out. Rotate. Run your finger along the bottom of the screen, playing the music of the spheres. Recognize that here, too, you are powerless against the march of time. Much has been made of Mountain’s menu, which goes out of its way to let you know that, as far as controls are concerned, you have “Nothing.” In fact, it’s incredible that, in a game where your play can’t affect the outcome, there is even a pause menu. After all, there’s nothing for you to stop.

Sometimes things happen in Mountain. Suns set, seasons change, pies and rocking chairs and kaleidoscopes crash into you and stick like ideas: resilient and unchanging. That is Mountain. You are Mountain. You are God. Surely you must know how to enjoy your time here.

Mountain’s attitude—that defiant “Nothing” in the Controls menu, for example—seems designed to raise the hackles of game formalists. The people who believe that games need challenges, fail-states, and competition. A quick run-through of App Store reviews taking this side of the argument: “I don’t understand nothing ever happens don’t know why i payed $0.99.” “I thought that this game would be more of a city building and customization game.” “No. This isn’t a game.” “How do you get items.”

Mountain is about how you can’t change the world you’re in.

Game abstractionists, on the other hand—the people who want to stretch the boundary surrounding the term “game”—love Mountain. Game abstractionists would say that Mountain’s moving the medium forward; that, by asking you to do nothing, Mountain is demanding more of you than most other games would ever dare. Often, games are about how you respond to and transform the world you’re in. Mountain is about how you can’t change the world you’re in. It’s a game about nothing, and not in the Seinfeldian sense. It asks you if you are able and willing to do nothing. Mountain finds out whether you are.

Because it doesn’t scan as funny, Mountain seems like the anti-game most likely to get tagged as “highbrow.” But I think that’s an open question. On its website, Mountain’s genre is described as “Mountain Simulator, Relax ‘Em Up, Art Horror, etc.” These genre labels parody popular game genres—simulators, shoot ‘em ups, survival horror—at an absurdly local level of detail, such that they clearly don’t apply to whole genres of games. Mountain positions itself in this self-aware, postmodern way to deflect claims of self-importance. Mountain knows exactly what it looks like to its detractors: a pretentious l’art pour l’arte, game-cum-Game. Knowing that and responding to it changes what Mountain is. 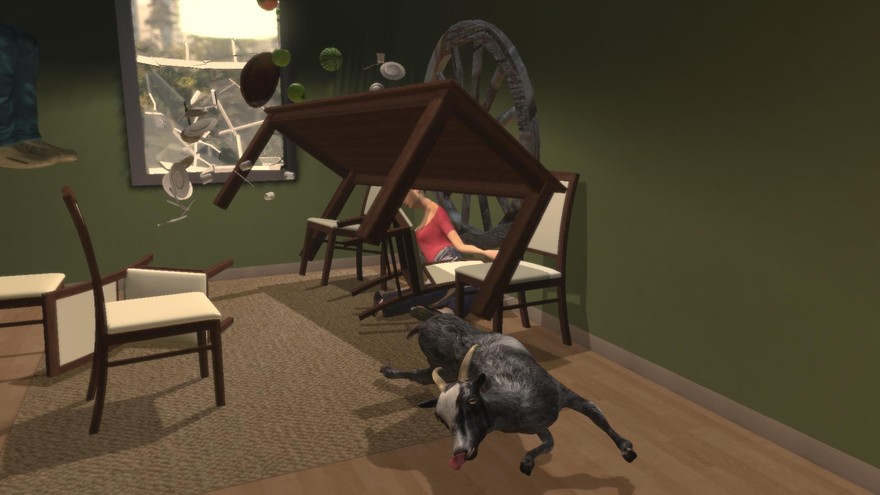 Goat Simulator feels like an outgrowth of the anarchical energy lying dormant in Garry’s Mod, the Source Engine toy box based on Half-Life 2. You’re a goat with a lolling, hyper-adhesive tongue, not unlike those sticky hands from the 90s. And, most likely, you’re on a rampage. As with other anti-games, Goat Simulator doesn’t give you a goal per se, but, given an environment full of opportunities to wreak havoc, havoc you shall wreak. I see Goat Simulator as a house of cards you get to knock down without having to clean it up. Everything in the world is just a little push away from chaos. Open fires burn right next to propane tanks, cars drive indefinite doughnuts in the dirt, trampolines somewhat brashly ignore gravity, sending you higher with each bounce. It’s a bit like one of those junkyard playgrounds: open lots filled with junk, accompanied by the tools for kids to turn that junk into an adventure of their own devising.

As with Mountain, Goat Simulator takes a pretty laissez faire approach to the question of fun. The game occupies this strange intellectual space epitomized by a favorite Das Racist line of mine: “First I get real smart, then I stupid up.” Postmodernism opened up the possibility of irony as an aesthetic. Tired of the current forms, art began to find new things to say by subverting and breaking the things people always used to say. We already had Farm Simulators; individual livestock simulations just take that argument to its logical conclusion.

Irony as an aesthetic.

Rock Simulator, then, took that one step further. It is the game equivalent of that old koan, “When you look at a rock, you’re not looking at a rock; you’re looking at yourself looking at the rock.” It’s an idea that helps you remember that you’re never free of your own experiences, ideas, and biases. If we’re talking about this in the context of 2014’s anti-game, we have to acknowledge that Rock Simulator isn’t out yet. But, in this case, the zeitgeisty campaign—a crowdfunded, early access in-joke made real—is as much of the game as the final product will be. Rock Simulator’s trailer is soundtracked by a mashup of the Thomas the Tank Engine theme song and Notorious B.I.G.’s “Come On.” The cognitive dissonance that Biggie going hard over the song that cued up Sir Topping Hat and Ringo Starr’s voice-over almost perfectly embodies the feelings that Rock Simulator seems to be gunning for: alienation, destabilization, an odd middle-ground between two worlds that would never overlap in any other circumstance. Like other anti-games, Rock Simulator puts you in the middle of an impossible Venn diagram.

What Das Racist, Warhol, Lichtenstein, Pynchon, Burroughs, Cage, B.S. Johnson, and Mountain, Goat Simulator, and Rock Simulator are all getting at is this: The relationship between highbrow and lowbrow isn’t a descending staircase; it’s a circle. Anti-games’ proposition isn’t either/or, but rather neither/nor. They’re not highbrow or lowbrow—they’re nobrow.