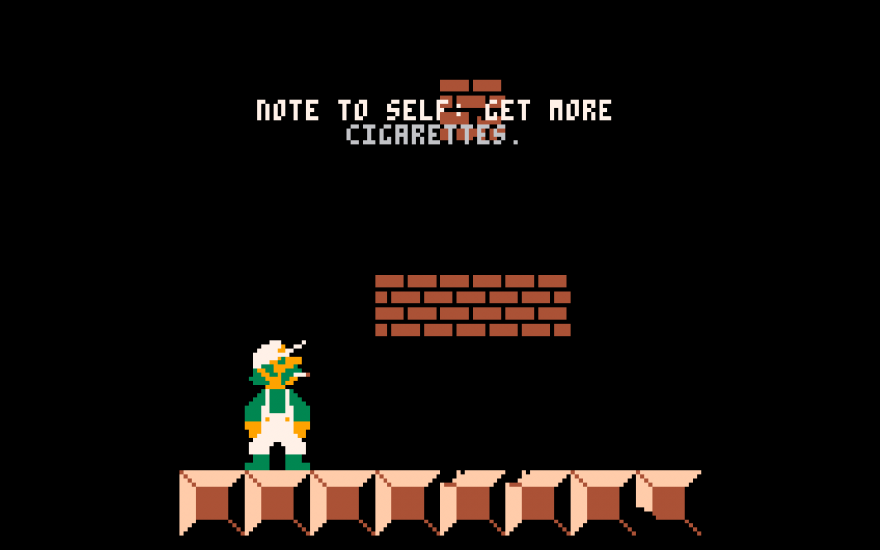 The world is weightless, a black abyss we disguise behind shades of blue and brick. But when the paint washes off, you see this strange land for what it is: a place without death because no actual life inhabits it, a blackhole without meaning beyond the veneer we coat it in. You go right, not out of any real desire to, but because turning left would only get you further away from the end, where the promise of nothingness awaits. You take a drag from the cigarette clutched between your fingertips. It hisses, a sound too real for an otherwise unending melody of artificiality. “Another castle,” you say to yourself, exhaling smoke, relishing the burn. “Always another castle.”

You were never the hero of this story, but that doesn’t matter anymore. It used to irk you, watching your undeserving brother bask in a glory you knew in your heart meant nothing. Now, you wish to be him in a different way. You wish the facade was enough. Wish you could even feign the happiness that comes so naturally to him. You wish you could ignore the unbearable listlessness of existence, if only long enough to give a single jubilant jump. “Woo-Hoo!” you try, but the exclamation catches in your throat, coming out in a growl. Your head collides with a brick wall that crumbles into disintegrated ash. “It’s-a-me,” you mutter, slumped on the ground, “depression.”

having read a bit too much Nietzsche

Ennuigi is a sadness simulator/interactive expose on the bleaker side of the Mushroom Kingdom. Seemingly having read a bit too much Nietzsche, Luigi finds himself in a funk. Instead of his usual confident stride, he glances in the direction the player tells him to move begrudingly, before finally taking a laconic step toward it, dragging his feet. Creator Josh Millard has forgone the jump and crouch buttons, opting instead for buttons to chain smoke and ruminate on “ontology, ethics, family, identity, and the mistakes he and his brother have made.” Born out of Millard’s unanswered theoretical questions regarding Nintendo’s beloved Super Mario Bros. universe, Ennuigi is a game that wonders “who are these strange men?  What motivates them? By what right do they wreak the havoc they do on this strange place? What do they feel about where they are and what they’re doing?”

You kind of half expect Luigi to start calling people “good old [insert Nintendo character here]” or accuse them of all being phonies. But Ennuigi‘s inner monologue sounds more like a mid-life crisis than the hormonal rant of a dissatisfied teen in a J.D. Salinger novel. Looking back on his life’s work, Luigi questions the purpose behind their quest, and hidden evil in their careless actions. And for what? To save a princess? Fight the bad guy? Get the glory? It all seems so trite, so superficial in the grand scheme of things.

This version of the Mushroom Kingdom appears only half finished, the occasional green hill or decaying brick castle interspersed between utter darkness. The chipper melody that scored so many of our childhood memories is replaced by a melancholic spiral of sadness. As Luigi shuffles from screen to screen, he comes up against obstacles he cannot pass, though he might’ve easily overcome them in the golden Year of Luigi back in 2013. Defeated by meager warp pipes, Luigi turns back the way he came, only to find himself in a totally different area than what it had been seconds before, representing the dullness of a world that passes him by without notice.

we leave them a shell of what they used to be

But Ennuigi captures much more nuance than just the plight of a less famous sibling (obviously, no one wants to be Daniel Baldwin). Ennuigi reveals the torture we put our playable characters through, making them do the same asinine things over and over again to our satisfaction—actions, let me remind you, that are only barely justified by the premise of the world. Level after level, they lose a little piece of their pixelated soul. By winning, we leave them a shell of what they used to be. And not just any shell, but one of those useless green shells in Mario Kart.

You can play Ennuigi for free on your browser.