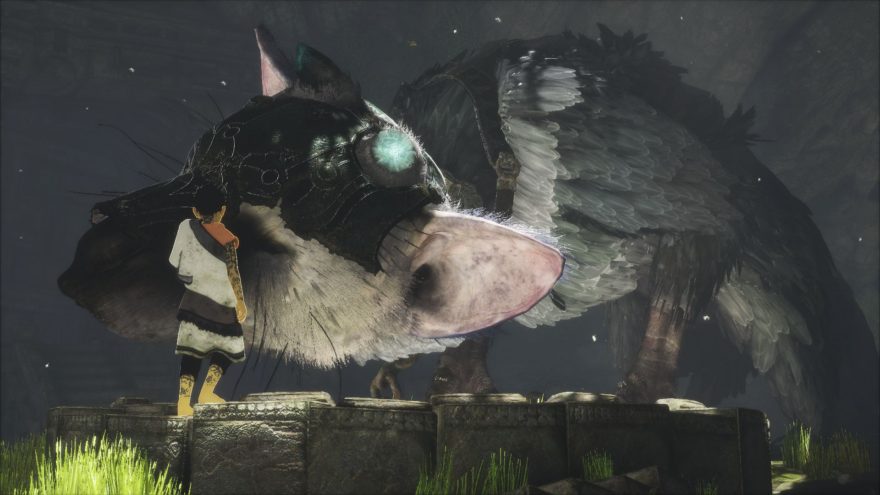 It’d be foolhardy to make any big claims about The Last Guardian, Fumito Ueda’s massively long-in-development third game, after 45 minutes of playing it at E3. So I will start with what I know, which is that the big feathery chicken-cat, who is the ostensible star and raison d’etre of the videogame, is a very nice thing. She—I do not know her gender, but she reminds of my cat, who is female—has a nice face, and eyes that glow like malfunctioning PlayStation Move controllers. After throwing barrels at her face for a while, I freed her, and then threw more barrels into her mouth, and then she laid her big head down, snout first, and I climbed on top of her where I pressed the circle button to pet her head. It was good.

There’s something off about the juxtaposition, though

There are many ways you can pet the sentient, bone-colored landfowl. You can climb on her head and rub it gently and whisper something into her horn. You can move onto her back or her leg and rub in wider swoops and yell slightly louder. Petting the nice Frankenstein’s creature does not seem to do anything. Getting a chance to sit down to play this portion of the game was a harrowing odyssey requiring patience, subterfuge, and tactically-employed aggression on my part, and as I sat in a big leathery chair patting the freak’s body and whispering and yelling things, I began to feel the eyes of the next in line boring into my head, and so moved on. Let me express some measure of disappointment that there were not _more_ ways to pet the beast; let me express an earnest hope that the varieties of cat-monster affection grow as the game itself continues. The demo ended without the promise of a pet-move upgrade.

As for the game itself? Who knows. It feels, shockingly, like a 2016 videogame, with cutscenes that you mildly influence and contextual animations galore, and big Hollywood oboes and choirs and such. It also feels very much like a Fumito Ueda videogame, not just in tone (somber) and color (brown) but in big floaty leaps and gnarled puzzles, built into ancient architecture. There’s something off about the juxtaposition, though—like a Tarantino script under someone else’s direction, or a band you like finding a new producer. It feels like an investment being shoved into profitability.

Perhaps nowhere is this most jarring than in the game’s wistful, past-tense narration, which carries you from its very opening moments through the end of the playable portion. It’s so endemic that I can’t imagine it isn’t a full throughline for the game. (I confirmed with a PR person that it is in the final game.) Previous Ueda games featured the quiet sounds of nature and howling winds, almost exclusively. Narration would have worked against the solitude this bed of near-silence was supposed to evoke.

At one point, as I laid atop the zombie dog’s face and whispered sweet nothings, the narrator told me something like, “I sat atop the beast’s back and headed toward the origin of the smoke.” Well, okay, I could’ve maybe found the smoke at some point. I hadn’t wanted to. Eventually, I followed it toward its origin to advance the plot, and found an alabaster-white shrine and glowing ambient music. But I hated that insistence. It was an imposition of order and narrative over a world—and relationship—that didn’t require it. I strayed from the path often and aggressively, much to the dismay of the people in line behind me, and every time the narration swept in to gently suggest that I do otherwise. I would rather lay atop that stupid thing’s face and tell it that I love it, as I do my cat, Athena. I would pet that gorgeous idiot forever. I hope The Last Guardian lets me.

The Last Guardian comes out for PlayStation 4 on October 25th.