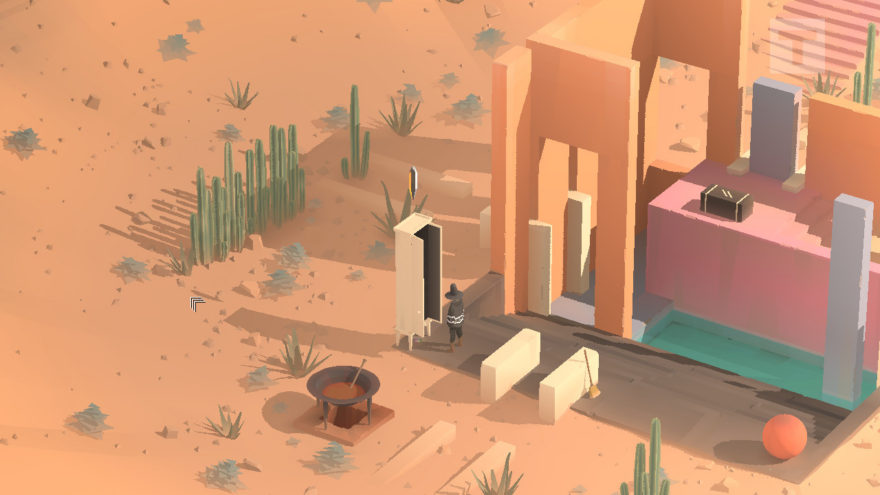 If you didn’t get to play the Triennale Game Collection when it came out for mobile earlier this year then perhaps you’ll consider picking it up for PC. It came out for free on Steam today. It’s essential for anyone who is into interactive art or experimental games.

Put simply, the Triennale Game Collection is a package of five games, curated by the independent studio Santa Ragione—makers of MirrorMoon EP and Wheels of Aurelia. It was commissioned by the Milan-based museum La Triennale di Milano (hence the name) for its XXI Exhibition, the theme of which was “design after design.” I spoke to Santa Ragione co-founder Pietro Righi Riva earlier this year who told me that the museum had contacted him as “they wanted to cover modern videogames as one of the shapes taken by contemporary design.”

a friendship evolve over several days in a mysterious desert

The whole thing was put together over the course of about four months. Righi Riva reached out to some game makers he knew shared his and the museum’s design sensibilities, giving them a month to put together a prototype, and then another two months to make the whole thing—that gave Santa Ragione a month to wrap it all up into a single package.

There were some design constraints given to the designers due to the games being intended for a collection that would first be released on mobile, so no online play and no graphical interfaces were a couple of demands. “Other than that, the artists had full creative freedom,” Righi Riva told me. “We encouraged them to integrate some form of progression in the vignettes, so that players would be interested in exploring the games more than once, but it was not a strict requirement.”

It so happens that the five independent creators chosen by Santa Ragione are some of our favorites. The full list goes as follows: Mario von Rickenbach and Christian Etter (Dreii, Plug & Play), Tale of Tales (The Path, Sunset, Luxuria Superbia), Cardboard Computer (Kentucky Route Zero), Pol Clarissou (Orchids to Dusk), and Katie Rose Pipkin (Mirror Lake). In fact, the last in that list, Katie Rose Pipkin, features in Issue 10 of our print magazine, which is now available to order.

As to the games, you’re gonna want to check them out yourself, but I’ll give you some teasers. One tells the magical story of everyday objects that seems to combine stop-motion animation with tangible interactions like pulling on a cord. Another uses circular motion to navigate the many layers of Christian cosmology. The third sees a friendship evolve over several days in a mysterious desert where you can dig up various mundane treasures. There’s also a game that has you move through a dreamlike labyrinth uncovering memories. And the final one is an endless journey through generative greenhouses.

You can download the Triennale Game Collection for free on Steam. It’s also available on the App Store and Google Play.