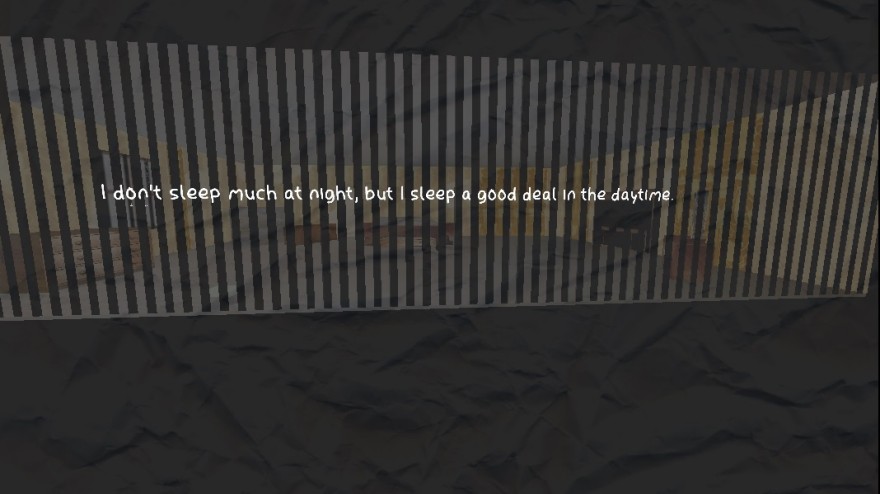 Famous for its visceral depiction of obsessive behavior (H.P. Lovecraft was a noted fan) as much as its social subtext, “The Yellow Wallpaper” tells the story of Jane, confined to bedrest in an attic by her physician husband John.

Bedrest feels much like prison, as it turns out; the windows are even “barred for little children” (or wives). The cadence of the prose quickens with Jane’s onrushing madness. She begins to hallucinate a woman behind the wallpaper, the “florid,” “repellent” yellow wallpaper “committing every artistic sin.”

John traps Jane with the tools of the day: namely, that catch-all diagnosis for anything female, “hysteria.” Driven off the brink of insanity Jane conflates herself with the woman behind the paper and breaks with reality—in the end causing her husband to faint as she “creeps” around and around the room in a haze.

How, you may ask, does that translate into a game?

Fitfully, imperfectly, but promisingly. Creator Edward Curtis-Sivess (in Space) puts the player in Jane’s shoes, of course, but also in a strange viewpoint that looks in on the papered room from outside—presumably the woman in the wallpaper.

Jane rushes around the room after the silhouette—tearing sections of the paper away with an unsettlingly loud sound—and the silhouette wanders outside as lines of Gilman’s text scroll onscreen.

There’s not much else to it, but the repetition of the gameplay, like the repetition in Gilman’s prose, is form fitting content: Jane is boxed in on all sides by her husband, by the societal structures that empower him, by her sex. All you can do is tear at the walls, and in the end that illogic provides perverse victory over John’s manufactured diagnosis.

Curtis-Sivess created all the assets in the game—even the font!—and per the rules of the jam, anyone can remix and repurpose the assets available at the download link.

To the jam’s larger purpose of broadening the base of go-to source material in games (Cthulhu and zombies are two bugbears the site singles out): mission accomplished.