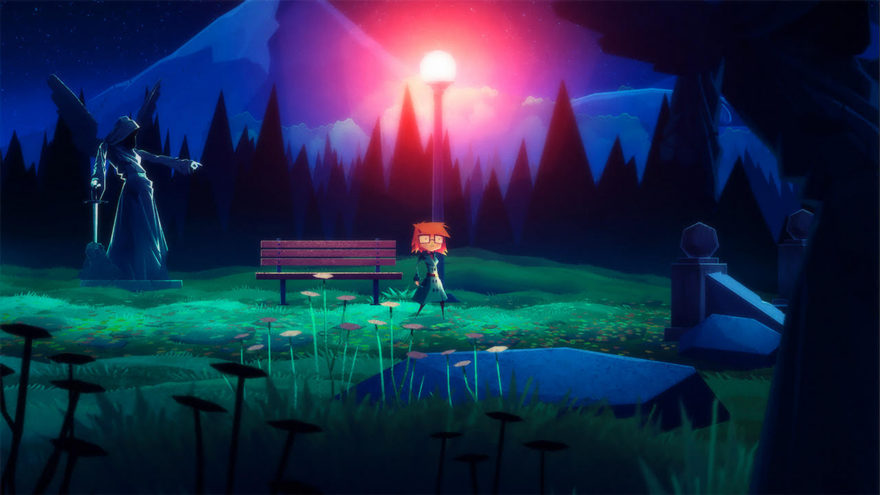 Oh, look at that, it’s 2017. You want some new games to look out for this year? Well, my dear, let’s start by focusing our lens on the upcoming teen girl detective game Jenny LeClue.

Its creator Joe Russ has re-confirmed to me that Jenny LeClue will be out for Steam later this year. It will also be coming to PlayStation 4 and mobile but only after the Steam version is out. Got that? Good.

However, you don’t need to wait any longer to actually play the game. There’s a playable teaser of Jenny LeClue available on itch.io that is meant to give you an idea of its atmosphere. It puts you on the hunt for the journal of Professor Zazer, breaking into and creeping around his office to gather clues as to its whereabouts. You won’t get much of an idea of the game’s storytelling techniques—which include manipulating a meta-narrative, searching environments to inform dialogue choices, and forking path decisions—but the puzzle design and handmade art is very much on display in this teaser.

it’s actually quite adult in places

To give you an idea of the broader plot of Jenny LeClue, it takes place in the town of Arthurton, where not much happens and where Jenny resides in boredom. But then her mother is accused of murder and so Jenny jumps at the chance, not only to absolve her mother of the accusation, but to go on an adventure. As Jenny is still a teen, there’s some coming-of-age lessons wrapped up in her pursuit, mostly about the blurry lines between right and wrong. Oh, and while it may look like a darling, with its sharp cartoonish visuals, it’s actually quite adult in places exploring themes of death, loss, and family.

Russ was also kind enough to send over seven new images from the game. Together they showcase a graveyard scene that you’ll presumably have to explore with Jenny in the full game. Let’s go through them below:

Not much going on here but I do enjoy the stencil-cut of those roadside trees. The cop car’s siren appears to be on, too, so I guess they’re on the way to a crime scene … the graveyard?

This looks like the entrance or exit of the graveyard. That big imposing iron gate, with mist creeping out from under, and those bold lights making it resemble a face.

Oh, Jenny, looks like you’ve found some ghostly fungi clinging to that tree. Enjoying that blue crescent moon in the sky too.

A statue with a sword in one hand while the other points towards a set of stairs. Hmm. Do you trust that statue or not? Maybe just take a break on the bench.

Hmm, another statue. This one looks the same BUT it has ivy growing down it and is pointing in a different direction. Still creepy.

Ah-ha, see that staircase, is this where that first creepy statue was pointing to? Get busy detecting Jenny, the ancient spirits demand it!

And our final shot sees Jenny without her flashlight, alone among the gravestones and bare, crooked trees reaching out like terrible fingers. Ain’t looking good, girl.

You can find out more about Jenny LeClue on its website. The game is coming to Steam, PlayStation 4, and mobile in 2017. There’s a playable teaser available on itch.io.