I can’t believe I’m going to say this, but I think a videogame might be depicting something more realistically than most movies, TV shows, and even paintings ever did.

Yes, My Grace is a king simulator. But while those words might at first call to mind images of glory on the battlefield, pretty girls in frocks, and drinking, this king simulator paints a different story. Yes, My Grace—in a sheer stroke of historical (but often overlooked) accuracy—instead makes you sit in a throne room, and listen to your subjects whine, moan, and gossip about how you’re running the kingdom into the ground. Oh, and there’s map plotting. Because, seriously, kings that tended to rule the longest also tended to do lots of map plotting.

As a mix between a strategy game and a text-adventure, the Yes, My Grace gameplay trailer released yesterday may not present itself as the most gripping thirteen minutes of internet you’ll watch today. But, like most gameplay trailers (whether exciting or otherwise), watching the demo doesn’t necessarily give you a sense of what it’s actually like to play the game.

The strategy system taps into some really interesting balancing concepts that anyone with a penchant for management-style sims will appreciate. For one, the subjects that come to you with offers, deals, and problems could very well be lying to your naive, stupid, trusting king face.

“The game is very much about deception and manipulation. Only information that is revealed to you by characters will be shown on the map and it’s not always correct,” says the Brave at Night studio team on TigSource. “The only way to be certain is to investigate with loyal characters (loyalties can also shift and the only indication of this is the characters behavior—no numbers to help.)” 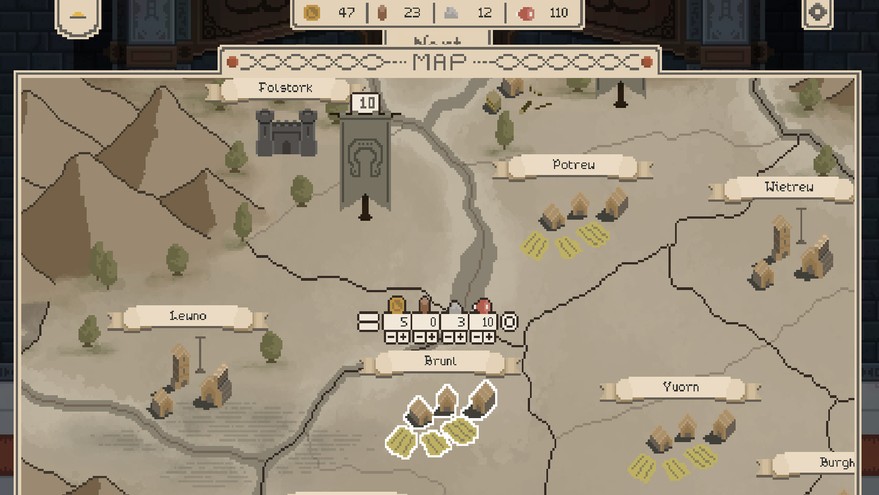 Which is where the realism really kicks in. Because most kings depicted as always gallivanting into danger or chopping off heads of anyone who looks at him funny, were probably a) a type of king who generally didn’t live to make much of history, and/or b) mostly fictitious. A king couldn’t rule successfully unless he knew how to negotiate his lands, keep people from starving, and listen to important subjects. Even battle consisted of much more pencil-pushing than we usually imagine—especially if you’re a king who serves his kingdom by, you know, staying alive.

But, being a videogame and all, that’s basically where the realism ends. Yet even the fantastical elements of Yes, My Grace seem purposeful and fitting for the story’s context. Deriving from Slavic mythology (!!), the fantasy adds another duty to the daily tasks of The Almighty Pencil-Pusher. Which is, of course, to pencil-push monsters out of existence by striking deals with monster hunters. In fact this is most certainly the best part of the gameplay video, where the narrator casually intones, endearing accent and all, “Okay, so, we also have some problems with monsters recently.”

Your job is still basically to wipe the asses of everyone who helped put you on the throne in the first place.

I don’t know about you, but I sincerely hope something like the Leshi will appear, which is a legendary Slavic giant-type wood creature who takes his victims into caves in order to tickle them to death. But right now it seems as though the game will stick to more general types of mythology, like using magic and witchcraft to maintain your kingdom’s health or soothe your subjects’ morale.

But magic aside, Yes, My Grace still paints an oddly nuanced portrayal of kingship, in that it basically recasts you as an over-glorified and overpowered state senator. You might have impunitive power, but your job is still basically to wipe the asses of everyone who helped put you on that throne in the first place.

You can follow the dev’s blog and Steam for more updates.