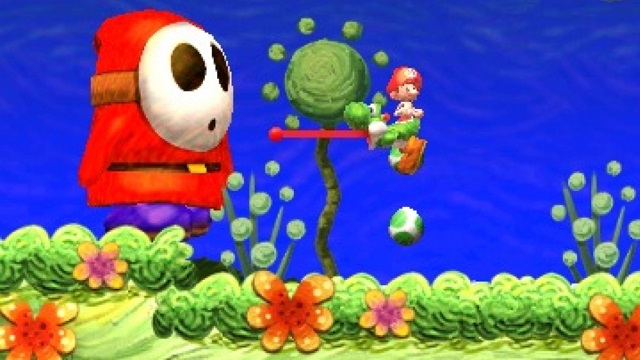 One of Nintendo’s shotgun spread of videogame announcements this morning included Yoshi’s New Island, which hopefully carries on the Super Mario World 2: Yoshi’s Island tradition of being totally bizarre. There are quiet legions of Nintendo fans who hold the game above all other Mario titles. Miyamoto’s departure from typical Mario form with Yoshi’s Island strongly appeals to a section of his fanbase, like the Weezer fans who swear by Pinkerton. It’s nice to hear someone break out of their established form.

There was no shortage of that in Super Mario World 2: Yoshi’s Island. You played Yoshi instead of the baby Mario on his back, health was based around you rescuing Mario before he got kidnapped, and you could eat enemies and birth (?) them in egg form to be thrown at other enemies. The graphics looked like they had been drawn by Miyamoto’s kids, baby Mario could skip on water and run on ceilings, and on and on. Miyamoto hardly ever works on all-new ideas, but Yoshi’s Island felt like he unraveled the concept of a Mario game, tied in some threads of dinosaurs, children, and just a dash of batshit crazy to create an unapologetically unique game. Here’s to hoping Yoshi’s New Island follows through.