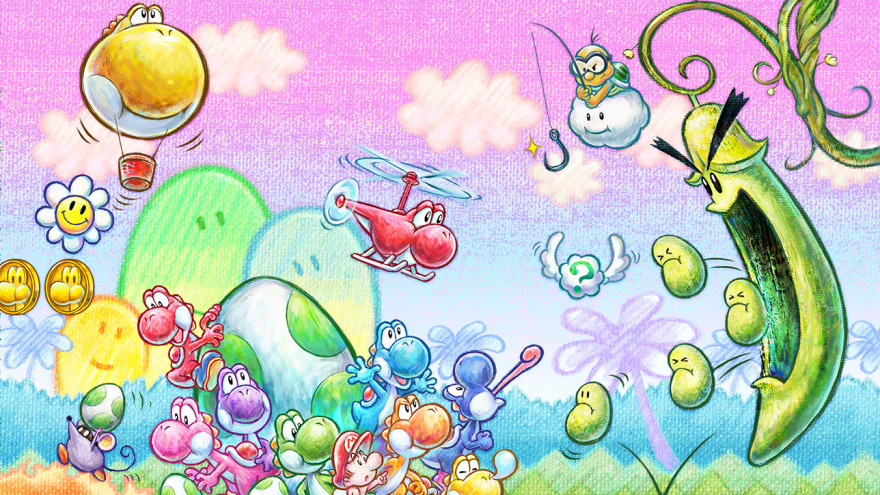 How had it never once crossed my mind that Mario and Luigi don’t seem to have a family? That, in almost 30 years of toadstool-jumping and ghost-busting their parents have almost never come up?

Yoshi’s New Island got me thinking about this for two reasons: a) this game’s plot is Dumbo with dinosaurs, so it’s The True Meaning of Family back to front, and b) its game mechanics are a metaphor for child care.

Let’s look at those one at a time:

Like its predecessors, New Island starts with yet another stork off to deliver yet another set of brothers sporting red and green newsboy caps. (Sidebar: In case you’re wondering, fairy tale storks deliver babies because their migratory patterns take them out of and back to Germany every 9 months. Grimm brother poseur and long-lived postage stamp Hans Christian Andersen wrote a pretty bleak story about it.) Said stork mis-delivers said babies to a set of would-be loving parents who apparently did not get the babies they had ordered. After flying off full-tilt to wherever babies come from to figure out where these kids were supposed to go, the stork gets stopped by Kamek, who swipes baby Luigi and causes havoc, as per his MO.

During the scuffle, the stork loses her grip, and baby Mario falls from the sky straight down toward Yoshi’s (new?) island. Our favorite future plumber falls directly into the middle of a circle of Yoshis trying to figure out what to do about the fact that an extra-imperialistic Baby Bowser has recently turned their island into his vacation home. Landing deus ex machina softly, baby Mario immediately crawls off looking for Luigi, and the dinos decide to help. Yoshi throws baby Mario on his back, and the game starts.

tl;dr: Take Dumbo’s premise and all of the identity crises that come with it, cut out Mrs. Jumbo’s rampage, stir in the traditional carrot-and-stick routine of a missing princess/brother to make it unmistakably videogamey, and voilà—out pops the plot of Yoshi’s New Island.

So, family comes first. Yoshi’s New Island makes it so that winning is contingent on being a good parent. If you’ve never played a Yoshi’s Island game before, it won’t be much like what you were expecting. It’s not an extended version of the parts of Super Mario World where you’re riding Yoshi and it feels as badass as the end of Blood Dragon. It’s almost eerie how slow-going the game can be. Collect-it missions—flowers, stars, red coins—encourage you take your time and explore every axis of the level. To obey the underlying authority of left-to-right is to miss the point. There’s no timer urging you ahead. Two of the control options are called “hasty” and “patient.” And “patient” is default.

But the thing that really sets the pace is the game’s health system. Survival means keeping baby Mario on your back. If Yoshi gets hit, Mario floats off in a bubble, crying, and you have less than thirty seconds to get him back. If you don’t, it’s game over. The fact that Yoshi doesn’t have health of his own further emphasizes the characters’ codependency—he literally only lives through the person he’s taking care of. In that sense, Yoshi’s a lot like a new parent protecting his kid. As soon as baby Mario starts crying—and, yes, it’s always Yoshi’s fault when that happens—he drops everything to fix it. Mechanically, nothing else matters. It’s a surprisingly selfless tweak to a genre predicated on individual success.

As an overprotective parent simulator, New Island demands that you keep danger at a distance, and rewards you for it. In Mario games, you can pretty much charge ahead with impunity. At worst, you kill yourself; at best, you set a new record. New Island expects you to take a very different approach since you’re responsible for more than just yourself. Completing the various missions in a level requires patience: checking corners for invisible objects, taking careful aim, keeping a good egg stockpile, etc. In track and field terms, if Mario is the 100 meter hurdle, New Island is jogging with a stroller.

Aesthetically, Yoshi’s New Island wedges itself in between Eric Carle and color-by-numbers. The music plinks along with the bright jagged majors of a Fisher Price piano, and the color scheme is straight out of the Crayola box with the sharpener on the back. It feels like a game for kids, but it’s underscored with a message for adults.

The one area where New Island‘s parenting metaphor falls flat is difficulty. Full disclosure: I’m not a parent. But I’ve heard it’s about as beginner-friendly as Dwarf Fortress. While it’s relatively challenging to gather up all of the mission items in a given level, New Island, on the other hand, never overwhelms. You do not go through the terrible twos. There are no disconcerting parent-teacher conferences to attend, no Nietzchean silent treatments, no unidentified substances in dime baggies to be found in the laundry. It’s kids’ stuff throughout, and that’s the game’s only real disappointment.

Read like this, Yoshi’s New Island is the best possible way for Mario and Luigi to approach the issue of family, joining the ranks of the rash of recent games that are built around the notion of protection. The narrative sets up the conceit, but the actions drive the point home. By the end of the game, you’ve made yourself cautious and selfless on baby Mario and baby Luigi’s behalves. I’ve never had 99 lives in a game before. Then again, I’ve never had such a good reason to keep them.