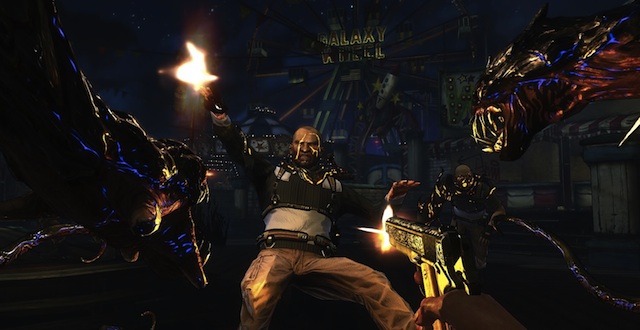 My first thought was that The Darkness II is far better than it has any right to be. This occurred to me after I ripped down the door to a pool hall using one of my demonic tentacles, and burst in on a bunch of wise guys. The jukebox in the corner was blasting rock at distortion volume as I grabbed a pool cue off a rack and hurled it through a guy’s mouth so hard it impaled him to the wall. Then I grabbed his gun and shot his playing partner in the head, spun to the right, stunned another with a tentacle slash, and finished the job by picking him up and using both demon arms to rip him in half along the spine. Throughout the entire massacre, white text flashed on the screen: “Impaled +30,” “Headshot +20,” “Wishbone +30.” Viscera is to The Darkness II what stars and coins are to Mario.

It works, though. Your character, Jackie Estacado, is a Mafia killer-turned-Don whose body and soul play host to an ancient force of pure malevolence, the Darkness. It won’t let him die, and it thrives on violence, the more savage the better. The demon arms are its physical manifestation, and they enable you to wreak havoc with pistols and demon powers simultaneously. Need cover in a firefight? Rip a car door off its hinges and hold it in front of you with your tentacles while you shoot through the window. When you’re done with it, hurl it with enough force to slice a man in half. Then eat his heart before throwing one of his limbs at someone. If you’ve upgraded your Darkness powers enough using the system of unlocking abilities, that limb might explode on impact and kill someone else.

It’s hard to make the “unstoppable killing machine” power fantasy seem fresh, but The Darkness II brings the Industrial Revolution to killing machinery. Jackie’s Darkness powers are Death’s spinning jenny and cotton gin rolled into one. The slaughter is so fast-paced and varied that at several times I was suddenly stunned to look around a room covered in gore and realize that everyone was already dead. Then I would have a feeling of coming back to myself, as the pressure lifted and I was able to process everything I had just done. In contrast, a superhero game like Batman: Arkham Asylum tries to create the same feeling by using elaborate animations in conjunction with very simple controls. You press a button at the right time to attack, and as you string together chains of perfectly timed attacks, Batman becomes even faster and more dangerous. You are controlling Batman but you are still a spectator. Push a button, and Batman beats the crap out of 50 guys.

The Darkness II leaves everything in your hands. Occasionally it overwhelmed my ability to multitask, but it’s still impressive how well the game’s controls make this four-armed assassin feel graceful and intuitive. Combat passes in a flow of snap-decisions. You can shoot that guy to death, but a clean headshot will give you more Darkness energy. If you grab him and execute him with the Darkness arms, you have a choice of killing him for health, ammunition, or an aura of Darkness energy that adds extra hit points. You get even more Darkness points for variety, which you can then spend on new abilities. To survive and thrive, you have must not just be an efficient killer, but a stylish one.

Viscera is to The Darkness II what stars and coins are to Mario.

It’s also disturbing how easy it becomes; how gory animations and wet, meaty sound effects stop being so appalling, and instead become the sound of a job well done. The Darkness II does a brilliant job of forcing the player to share and understand Jackie’s own ambivalence toward his powers. During one monologue, he explains that giving in to the Darkness is like being at a superhero movie, watching yourself up on the screen, larger than life and wining every battle. You feel great. Then “you notice that the other people in the theater are screaming, and you realize they’re watching a horror move. And you’re not the hero.”

That’s Jackie’s problem: His powers are a curse, and all roads lead to ruin for him and the people he cares about. He gives into the Darkness to gain revenge, and then to protect his friends, and finally to save himself and the soul of his lost love, but every victory brings another, greater disaster into view. His impotence in the face of such cruelty makes him, if not a monster, then a very dangerous pawn.

Players will experience a similar pattern of repetition and disappointment. As good as they are, you’ve seen all The Darkness II‘s tricks by the end of the second chapter, and the rest of the game is a series of increasingly less-interesting variations on that theme. What I described at the beginning is pretty much identical to the battles you fight at the end. Eventually I experience a kind of homicidal ennui as I impale a thug on a piece of a rebar for the 57th time. “Is this all there is to the Darkness?” I ask, as I slice a man in half and fling his lifeless torso aside.

Unfortunately, the answer is mostly yes. There is simply not enough variety to the enemies or the level design, and so the sense of discovery goes away very quickly. The Darkness II throws a few wrinkles at you, like enemies that use searchlights to neutralize your Darkness powers, or other enemies who use whips to yank weapons out of your hands. But the former you learn to shoot the moment they appear, and the latter are more an inconvenience than a threat. The narrow, linear level design exacerbates the monotony. Your enemies are arrayed in front of you, and your job is to charge into their midst and kill them all. By the end, there was little sense of the importance or danger of one fight over another. The climactic encounters were barely distinguishable from the rest of the game.

The plot driving the action, meanwhile, veers away from its original focus as it becomes more fixated on an evil secret society that wants to steal Jackie’s powers, and the impressively boring history of the Darkness and its battle against a similarly ancient force, the Angelus. It’s Buffy the Vampire Slayer, full of overdone mythology and angst, except no one cracks a smile. Jackie’s family (crime and otherwise) drop out of the story, and the action leaves the streets of New York and moves to more generic, harder-to-locate settings.

Which is a pity, because  what makes The Darkness II work so well is its blend of Scorcese-movie cliches with Gothic comic-book magic and mayhem. It takes these two worlds that are utterly foreign to each other and forces them to live together, so we see low-level enforcers trying to fit Jackie into their understanding of the world. Most of them seem to decide that Jackie’s just a tough guy like them, except he’s really, really tough. The main villain, on the other hand, is a member of an ancient cult who tries to scare Jackie by describing the awesome power of the Darkness, and seems genuinely annoyed that all he gets in response is a “Fuck you.” This is not how these stories are supposed to go, but then mobsters and demonic powers are not supposed to mix.

The Darkness II is a fine action game, but it falls into the trap of believing in the significance of its own backstory.

The air of unreality that pervades the story takes a sinister twist in a series of increasingly troubling sequences in an insane asylum, where Jackie is being treated for a violent and delusional personality disorder. These scenes are effective because Jackie’s world always seems so strange, so wrong. It’s at once impossible that the insane asylum could be real, and yet it also seems plausible that Jackie has been lost in a fantasy. It even starts to seem preferable, as Jackie’s reality gets grimmer and grimmer, because the asylum holds out the hope that it really is a nightmare from which Jackie might one day be able to awaken. Jackie might be in a hospital, but the Darkness is gone and his lost love, Jenny, is alive. And here we come to The Darkness II‘s biggest problem: the original Darkness videogame.

Jenny Romano was murdered in the first game, and her death was the catalyst for Jackie’s eventual acceptance of the Darkness and leadership of the Estacado crime family. Players learned all about their relationship, watched her die in one of the most painful moments I can recall in a videogame, and then said goodbye to her as she and Jackie found one last moment of peace before her spirit moved on. It was ultimately a game about grief and blame. All its supernatural trappings served to explore these incredibly human, relatable themes.

If The Darkness looked at grief through the lens of a comic-book revenge story, The Darkness II inverts that relationship. It externalizes every one of Jackie’s feelings and makes them real. Where the first game had Jackie attempting to reach Jenny beyond death, a denial of his loss that he eventually had to accept, The Darkness II really does show Jenny’s soul being imprisoned and tortured somewhere in limbo.  We learn the history of the Darkness, and the history of a cult formed to worship and control it, but along the way we lose sight of Jackie. His problems take on a mythic dimension that have nothing to do with him as a character, and so he might as well be an everyman instead of the ambivalent, tragic figure he cuts at the beginning.

The Darkness II is a fine action game, but it falls into the trap of believing in the significance of its own backstory. Throughout the first game, and part of The Darkness II, shooting and killing is window-dressing for a story about guilt, rage, and blame. Jackie’s real dilemma is whether or not he can ever live with himself again, or if he will be torn apart by his own grief and his darkest, most destructive impulses. To its detriment, The Darkness II sets that issue aside to focus on even more ancient enemies. Worryingly, the ending hints that Jackie’s story now belongs entirely to the Astral Plane and the Stygian Abyss. I just hope the battleground quickly returns to Hell’s Kitchen.