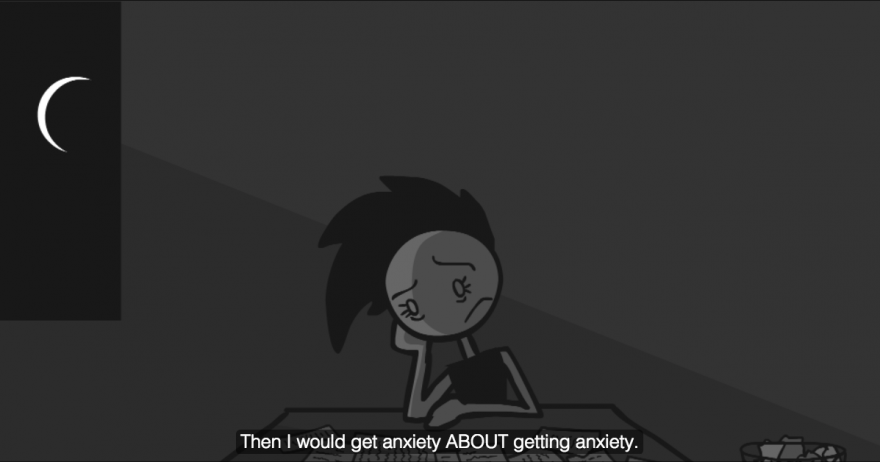 by Jess Joho
@liongirl528
Google+
Last year, Nicky Case and Vi Hart released Parables of Polygons, an experiment inspired by Bret Victor’s work on Explorable Explanations. Their aim: to bring the best parts of interactivity to a blogpost that might help explain how systemic biases and prejudices can take shape. After being a finalist for the Games for Change award in the Most Innovative category it seemed their playable post had achieved even more than what it set out to do. Putting a new and innovative format on the map, Nicky Case is back once again with Neurotic Neurons, an interactive exploration of the science behind anxiety and its potential therapies.

KS: Do you think knowledge can help fight anxiety or other mental health issues?

Well — a little knowledge is a dangerous thing. One of my biggest pet peeves with popular science articles on psychology is that they all seem to imply your mind is fixed, and it’s genetically determined from birth. Like, “Oh some people are [some Myers-Brigg trait] because of [some gene sequence]” or “Oh women are [gender stereotype] because [misinterpretation of evolutionary psychology].”

If you have anxiety, or some other mental health issue, and you get the impression that the brain is fixed, not only is that actively harmful, it’s actually false. The most interesting research in neuroscience/psychology surprises us again and again with how malleable the mind is—for better or worse.

To know you can change your brain

So, the kind of knowledge I hoped to spread with Neurons, is the growth/learning mindset, as opposed to the fixed mindset. To know you can change your brain — it’s hard, but not impossible. And I convey this not just through words, but by having the player actually modify a model of a brain. And if you can do it in a simulation, maybe that’s a first small step to doing it in real life.

The growth mindset doesn’t only help with overcoming lots of mental issues. It’s a necessary step in many different types of therapies (in psych jargon, we call it “self-efficacy”, or, “internal locus of control”).

KS: It’s been a year since the release of Parables of Polygons, and now you’ve experimented with something like Neurotic Neurons. How has the response to your explorable explanations been?

I’m not sure how many other creators have that “oh god I haven’t made anything substantial since X” guilt, but that has been me for several months now. So, yes, I am relieved to finally be releasing a new interactive thing.

As for explorable explanations, it’s really taken off! That is, of course, a completely biased opinion, but one that may coincidentally happen to be true. Carnegie Mellon University did a hackathon a few months ago focused specifically on explorable explanations! Also, I’m seeing more and more news sites having dedicated teams for making “interactives”. (e.g. FiveThirtyEight, and NYTimes’ The Upshot). I am surprised that explorable explanations has been having far more success in journalism than education.

Then again, I guess the newsroom moves much faster than the classroom.

KS: What do you like about these explorable explanations? How do they compare to the kind of work you can do in games?

Having started out in videogames, (I’d say I’m currently on the fuzzy edge of “games”) I really enjoy the freedom Explorable Explanations gives me — I can borrow the best bits of videogames, (learning-by-doing, emergent behavior design) but avoid the expectations and conventions of the medium (scores, fail states, a scruffy middle-age protagonist).

KS: Neurons makes a convincing case for exposure therapy. Have you done some yourself?

Since then, I haven’t had any formal therapy sessions, nor do I think I could financially afford to, to be honest. But I can think of a few instances in my life where I overcame deep fears through unintentional exposure.

For example, I used to be really nervous about talking to people, let alone public speaking. But during my internship at some videogames company, I had to constantly request help from supervisors, and give a presentation at the end of every week. At first, of course, I was nervous as hell. I recall standing behind my supervisor for 15 minutes, needing help, but too scared to tap his shoulder, so I just hovered behind him hoping I’d somehow get in his peripheral attention. Eventually, through constant exposure, my social anxiety diminished. And now, I even enjoy public speaking!

“I’m so sorry for bleeding in your sink.”

There’s a variant of exposure therapy called “flooding”, where instead of slow, systematic desensitization to a fear, you do it all at once. I have a particularly dramatic story where I overcame an anxiety, through unintentional flooding. When I started living by myself, (shortly after coming out to my parents) I was insecure about whether I could actually take care of myself. I didn’t want to show weakness to my housemates.

So, uh, when I sliced my thumb open in a Safeway, and started bleeding profusely in the aisle, I didn’t call anyone up. I just wrapped it up in a paper towel, took an hour-long commute home, and tried to convince my very concerned housemates I was fine. After trying to wash it out in the sink for ten minutes — while it was full of blood — I finally, finally yelled out for help. The housemate “captain” came in, and I recall specifically the first words out of my mouth: “I’m so sorry for bleeding in your sink.”

Anyway, and that’s how, through unintentional flooding therapy, I got over my fear of being vulnerable and asking for help. Now I have a scar on my left thumb as a permanent reminder of that incident, a reminder of “Hey, Nicky, don’t be a dumbass. Ask for help.”

KS: What do you hope people walk away from Neurons with? What are you afraid people might misunderstand?

Like I said before, I hope people come away knowing— contrary to so many bad popular science articles—that their brain is not fixed in its ways. You can retrain your brain. It may be hard, it may require assistance, but it is always possible.

Now, the model does have a lot of simplifications. I think this is a good thing—a street map is useful because it simplifies what the city looks like, and this model is useful because I threw away irrelevant details. Still, I’m going to write and publish a list of simplifications I made, and admit gaps in my knowledge. Given that neuroscience/psychology is so full misconceptions like that stupid “we only use 10% of our brain” trope. It’s probably worth clarifying some stuff, and debunking myths.

But, for a rough summary of simplifications I made, try this list: