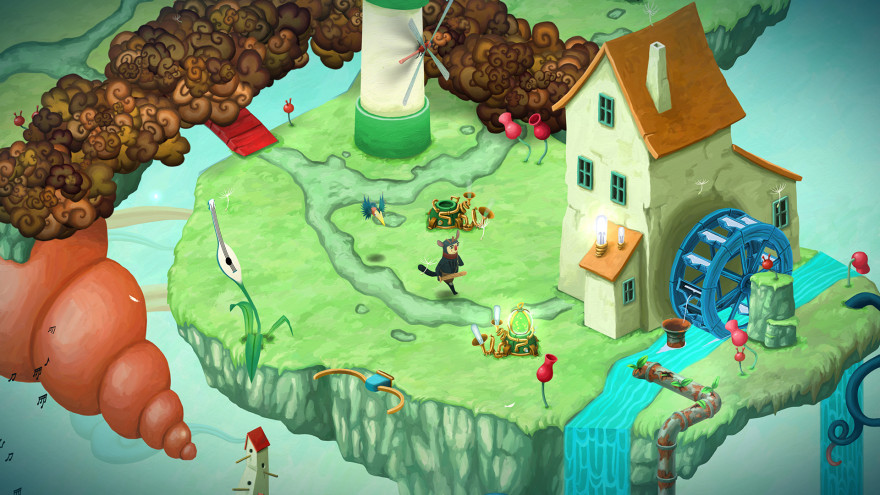 Surrealism, by its least-detailed description, is the illogical illustration of one’s dreams. Be it through painting, writing, or anything else in the art realm. From the works of surrealist pioneer Max Ernst, to the ubiquitous Salvador Dalí, the textbook surreal aesthetic is known far and wide—and still inspires many to this day. The latest to channel their surrealistic itch are game development team Bedtime Digital Games, who are exploring the art style for the second time in their career with a spiritual successor of sorts. Yet this time they’re exploring the surreal in a prolonged, grander way: as a full-fledged isometric adventure game rather than a lone puzzler.

“We really liked the idea of creating a world, instead of just a string of levels,” said Jonas Byrresen, lead game and story designer for Bedtime Digital Games’ Figment. Player feedback for the development team’s first surreal-themed title, Back to Bed (2014), was optimal in beginning production of Figment. “We only scratched the surface in Back to Bed,” added CEO of the company, Klaus Pedersen.

“We want this to feel like when the game ends, the world is still here.”

In Figment, the player’s character is a courageous, mouse-eared fellow named Dusty, who explores the many realms of a human’s subconscious during a reaction to trauma. There are three worlds overall, all exploring a different aspect of the human mind itself. There’s creativity (with its most colorful environments), logic (via a clock-laden world), and at last, a mountain of stress (littered with towering bills and dirty dishes). As the game progresses, color seeps out of the worlds, and the environments contort to the varying themes host to it. As Dusty explores each realm, he must defeat the nightmares (in the form of enemies encountered) that inhabit it. In addition to the run-of-the-mill nightmare enemies, there’s sing-song-y bosses that taunt Dusty in rhyme along each world.

Prior to beginning development on Figment, Byrresen and Pedersen avidly researched how human beings reacted to concepts of fear. They incidentally had a striking discovery: all basic human fear is essentially the same, no matter who the person is or where they are from. With that idea in mind, Byrresen and Pedersen embarked creating a game starring its symbol of courage (Dusty), and the struggle to overcome general, recognizable fear in order to preserve the mind. “We want this to feel like when the game ends, the world is still here,” said Byrresen. “The mind is still there. And these people in it, they make the mind go ‘round and function. And these fears are what we’re trying to stop, and once we stop it, the mind will hopefully go back to its normal state.”

The game has also acclimated a classic Surrealist concept to describe its unique world’s ideology: “dreamlogic.” “The windmills [in the game] are a good example,” noted Pedersen. In the game, the dragonfly-propelled windmills are powered by well-placed (and color-coded) batteries. Oddly, these all have the opposite effect to the windmills our reality’s used to. The windmills in Figment expend wind to blow away poisonous clouds, by blowing air in the complete opposite direction, rather than wind travelling through it and generating power. “In this context it makes sense: it’s dreamlogic,” explained Pedersen.

Figment is not simply just exploring the subconscious, but rightfully pairs a striking classical surrealistic art style along with it. The surrealism adds an extra dimension to exploring the dreampunk landscapes of the mind. Plus it’s moments like hearing the light squish under Dusty’s feet while walking across a centipede bridge, or approaching the far-and-in-between towering homes of the mind’s residents, that make Figment not just look aesthetically promising, but feel promising. Its release window is still a ways off—2017—and it remains in the early stages of development despite its artistic style being nearly nailed down perfectly. But, when a game’s screencaps look like concept art, it can be surely said that there’s something going right.

Look out for updates on Figment over at its website. Check out our ongoing coverage of GDC 2016 here.