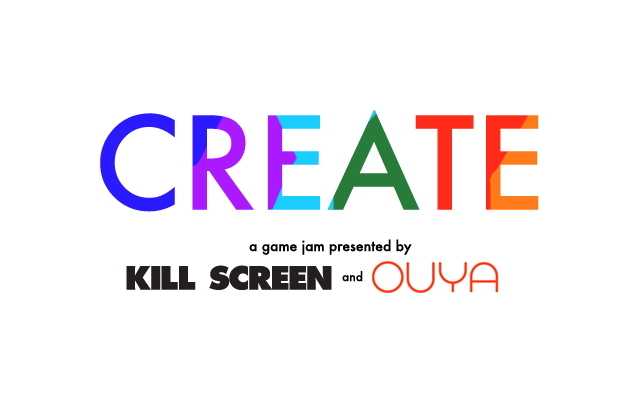 After three weeks of incredibly difficult deliberations, we are proud to announce the winners of the CREATE Game Jam! We were so impressed with the depth of quality and variety of submissions, and hope that this is a preview of great things to come for the OUYA. For those of you who haven’t checked them all out, here’s the play-by-play of the contest winners.

From the moment we saw the character selection screen (which takes place on a crashing plane), it was clear that we had something special on our hands with this game, and it was no surprise to us when our grand prize judges voted almost unanimously for this title.  Tight controls, local multiplayer, and hilarious level design point to a spiritual successor to the likes of Contra and Streets of Rage.

The “Most Surprising Award: Television

Simply put, Television was unlike any other game we played in the CREATE Game Jam. The trailer seems to hint at a dystopian conspiracy under the surface, and we can’t wait to see where it goes.

Controls are one of the hardest things to get right in a game jam, as tuning, especially for an esport game like Bombball, can take a lot of time.  We were impressed with how this game handled, considering the early stage of development.

The “Most Immersive” Award: Whispering Willows

This beautifully animated title drew us in from the moment it booted up.  We were instantly captivated by the secrets of its haunted house demo level, and we look forward to unraveling the rest.

The “Pop Your Eyes Out” Award: Pipnis

With multiple nominations, we obviously thought Pipnis did a lot of things right.  But it was the deceptively simple and carefully chosen polygons, a staple of Santa Ragione’s work, that proved that minimalism can be as captivating as the most ambitious 3D renders.

2D Cube Zombie Platformer was one of the first CREATE games we played, and it stuck with us all the way through the jam.  We are relieved that we no longer have to wonder what Left 4 Dead would have been like if it came out for the SNES!

Stikbold is one of the strangest competitive experiences we’ve ever had.  We bashed each other, took hits from a rogue ball launcher, avoided giant whales that crashed through the game court (obvi), and eventually played a trumpet to humiliate our vanquished opponents.  All in the span of about 3 minutes.

Special thanks belongs to our guest judges, who graciously selected our Grand Prize winner: Felicia Day, Adam Saltsman, Phil Fish, Alexis Madrigal, Austin Wintory, Ed Fries, Joanne McNeil, and Zach Gage, and to our preliminary judging team, who played all 165 submissions in search of our finalists.

But most importantly, thanks to all the devs who took the time to compete in CREATE!