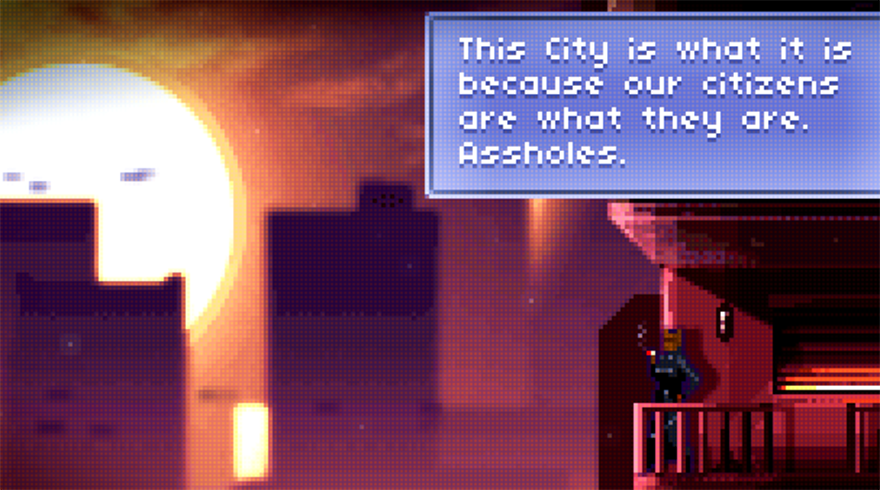 A feline contract killer waits outside the door of her target’s apartment at sunset, smoking a cigarette. Her gun is loaded, but she’ll need to think a bit more outside the box if she wants to get paid. Once our feline protagonist finds herself inside the target’s apartment, she decides the best method is to lock the victim inside and leave him to die from starvation. It’s a clean-cut plan—until the cops show up.

Badass Inc. is a strategic action-adventure game originally created with Haxe, an open-source game programming tool, in less than 48 hours for the Ludum Dare challenge—a themed contest for indie developers to make the best game within an allotted time frame. The challenge’s theme was An Unconventional Weapon.

The game’s creator, Sébastien Bénard, said the game’s tone and style relied on inspiration from Blade Runner, Deus Ex, Another World and Flashback, and it shows through in the main character’s futuristic black leather design and the sci-fi cityscape looming in the background. It helped the game to take home the gold for the graphics category, and the silver overall, for the Ludum Dare it was created in.

Now, on the back of this success, Bénard has teamed up with Motion Twin, a French game-making studio, to work on expanding that initial concept. The limited prototype that Bénard created is being used to “test the water” and draw in some feedback that will help the bigger project, which will have more situational puzzles, tense shoot-outs, and plenty of idle smoking time.

The prototype is only a few minutes long, but it’s also witty and makes good use of the time it has. You can play it for free on your browser here. And if you want to check out the soundtrack by Volkor X it’s available on Bandcamp.